Severe storms have lashed the Northeast with a ‘supersoaker’ downpour dumping up to ten inches of rain on parts of Philadelphia.

Dozens of residents were left stranded on roads and in their homes as torrential rain stalled cars and swamped their homes.

Around 45 residents were evacuated from the Lafayette condos in Bensalem, which received between seven and 10 inches of rain in a few hours.

It comes in a week of rainy weather for the Northeast as New York heads to set the record for the wettest July in the city amid rainstorms, turning roads into rivers.

It is already the wettest start to July recorded in New York, following another heavy rainstorm which hit yesterday. 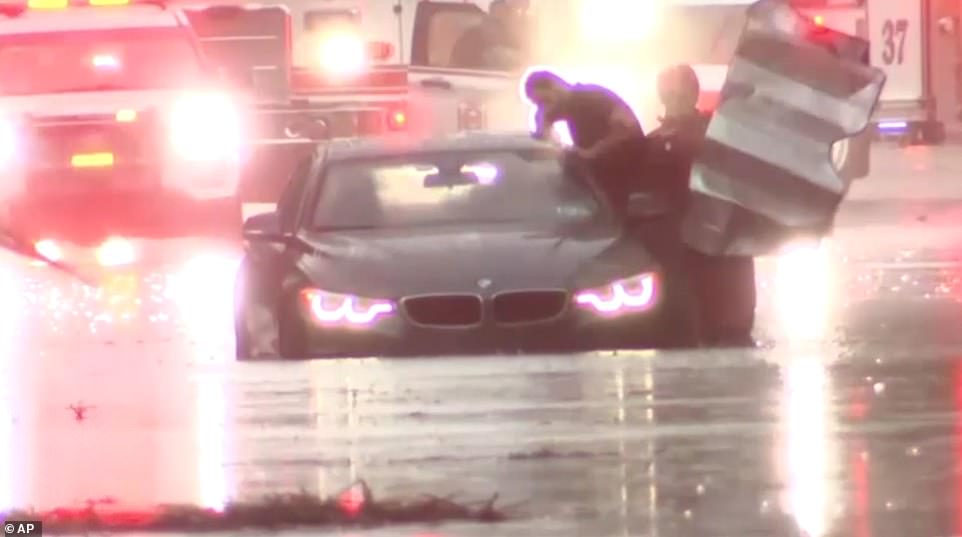 Storms have lashed the entire north east as a ‘supersoaker’ storm dumped 10 inches of rain on Philadelphia, leaving dozens stranded 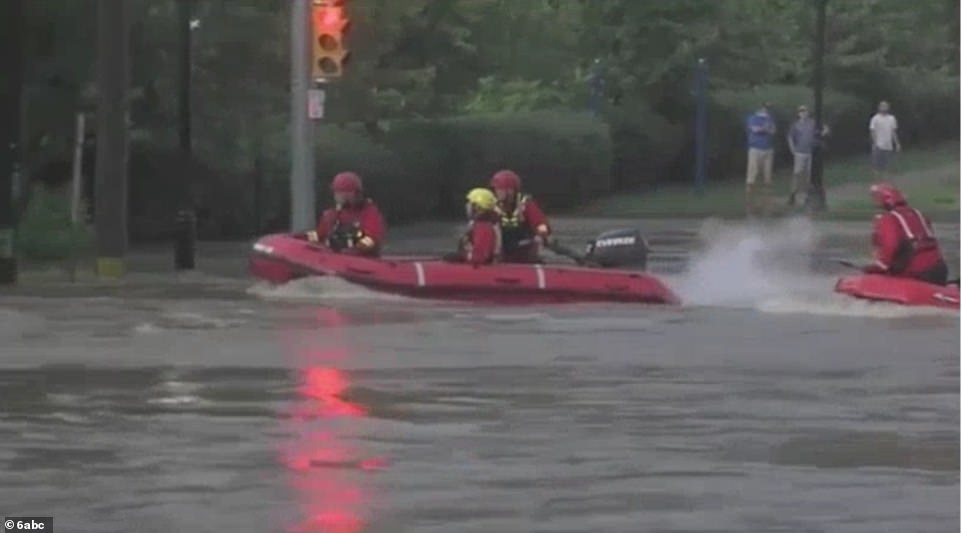 Bucks County in Pennsylvania received between six and 10 inches of rain in around three to four hours, 6ABC reported.

The flood is said to be a 100-year flood, which means the intensity of the flooding has a one percent chance of being equaled or exceeded in any given year. Theoretically, it could happen more than once during a short period of time, despite its name.

The weather service said: ‘Widespread and life-threatening flash flooding is occurring. This is an extremely dangerous situation.

‘Do not venture out unless it is an emergency or to move to higher ground.’

Drivers travelling home from work, including those going under the Route 13 bridge, became stranded by devastating flooding.

And the heavy rain is not over, with severe thunderstorms producing damaging winds, flash flooding and even tornadoes, is forecast for the end of the week, according to Weather.com.

The frontal system produced the heavy rain which caused an unsettled pattern producing devastating flooding between Philadelphia and New Jersey. 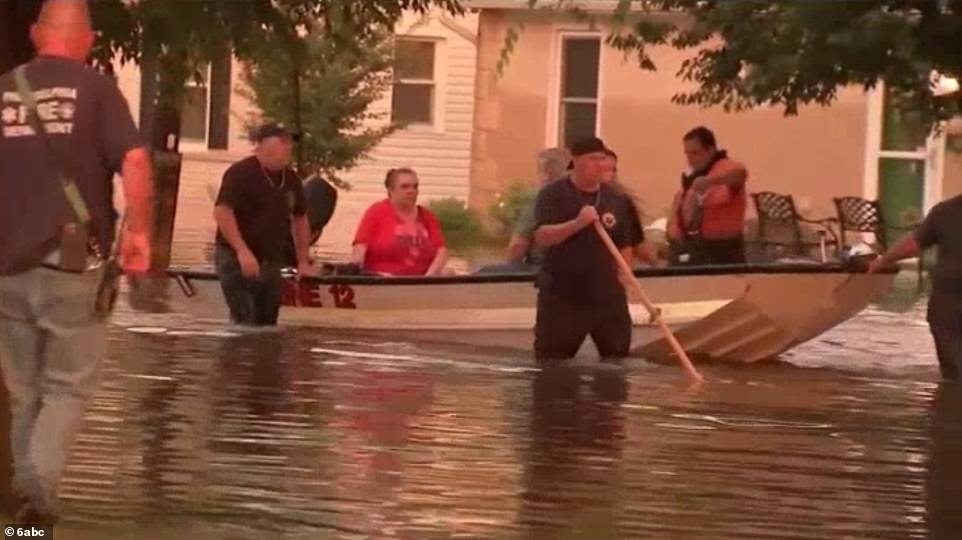 More rescuers can be seen helping people in boats, using oars to move them down the roads as they wade through the waters that came up to their knees 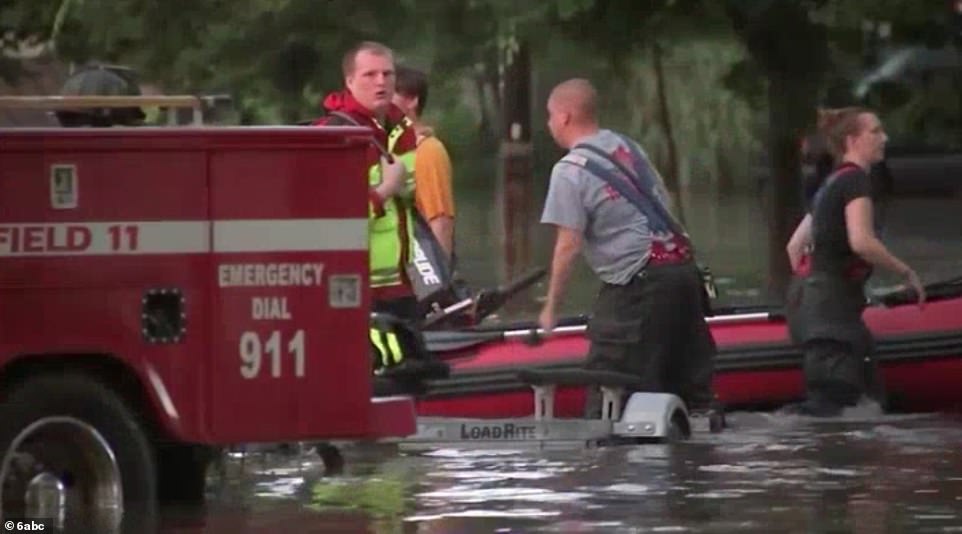 Emergency services stand around a red raft, with water up to their knees, as they prepared a rescue mission for stranded citizens on Monday 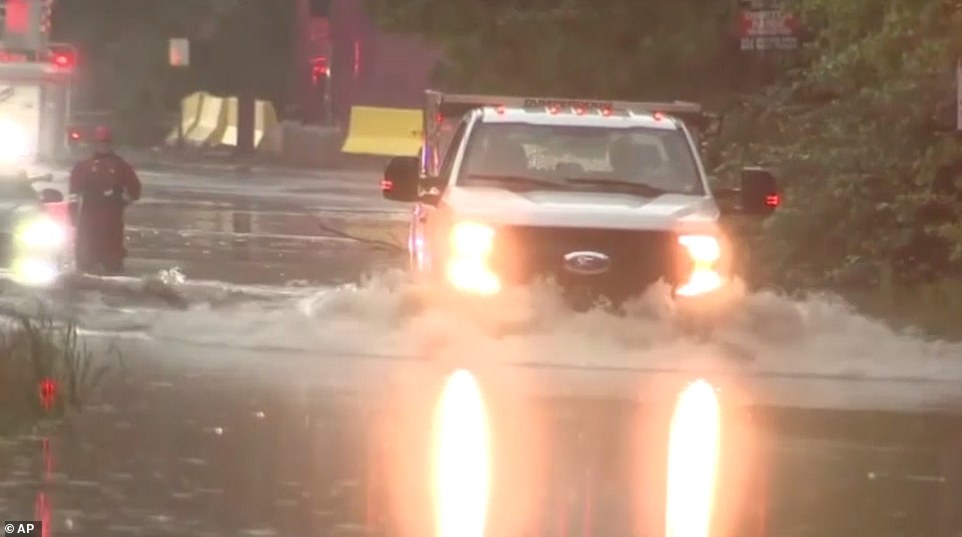 In Philadelphia, Vicky Pacheco tearfully told the station: ‘I opened my door, I couldn’t open it, and the next thing you know everything was flooded in my house, The water just started coming up.’

Marie Kelly said that every room in their house ended up covered in two to three inches of water after the water started coming in the front door.

In northeast Philadelphia, Mike Givens just spent $13,000 redoing his house, but the storm completely flooded his basement and ruined other parts of his home.

Stephanie Houser was driving home from work in Center City and said that she ‘couldn’t see anything’. Despite using her wipers as fast as they could, she said they weren’t helping.

New York City is on flash flood watch until 10am on Tuesday after the storm on Monday which followed a rainstorm just four days ago which flooded subway stations and streets.

According to the National Weather Service, there is a chance of showers and thunderstorms in New York continuing tonight as well as on Wednesday, Friday, Saturday, Sunday and Monday. 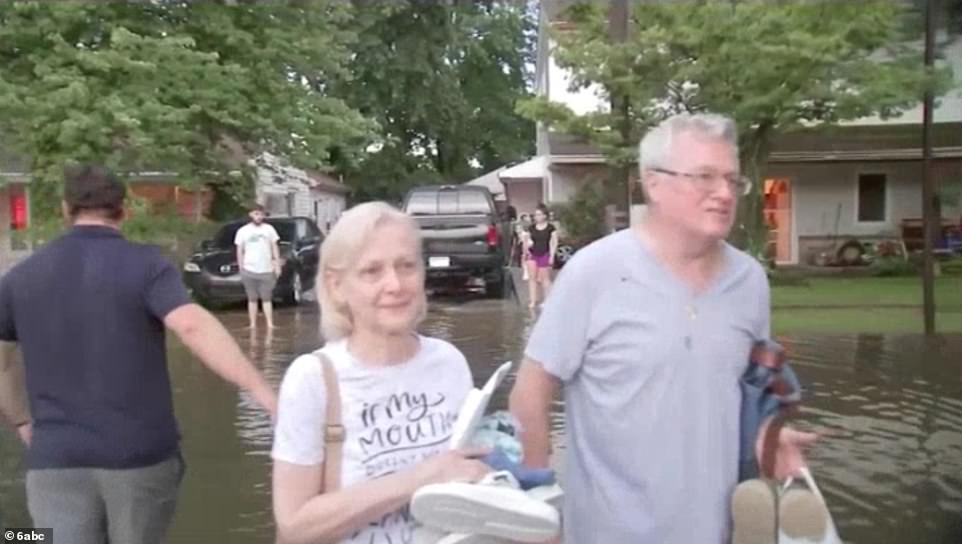 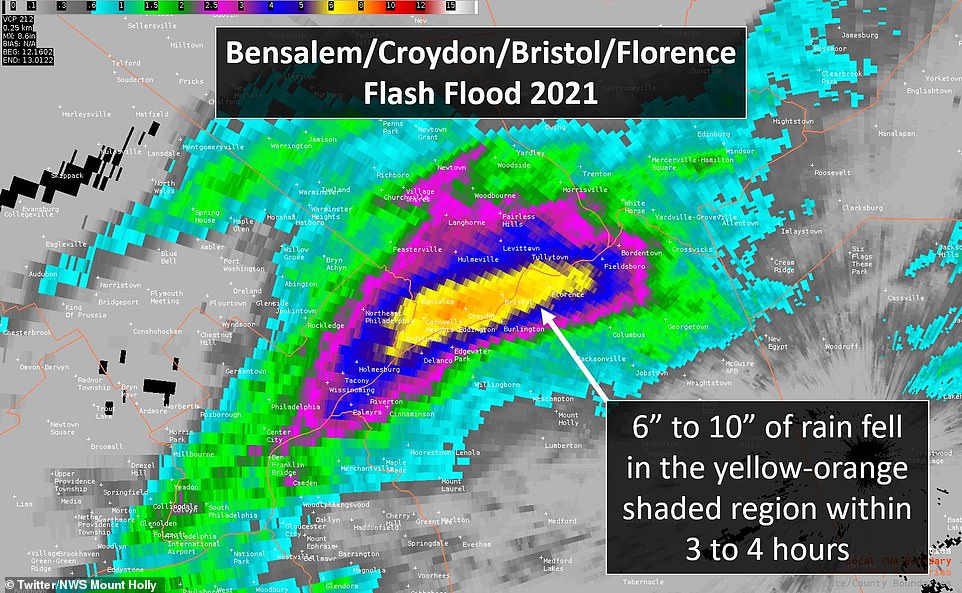 National Weather Service Mount Holly tweated that a significant flash flood occurred on Monday afternoon and evening near the Delaware River in Bucks and Burlington Counties, explaining that the areas which saw the most rain received between six and ten inches in just three to four hours 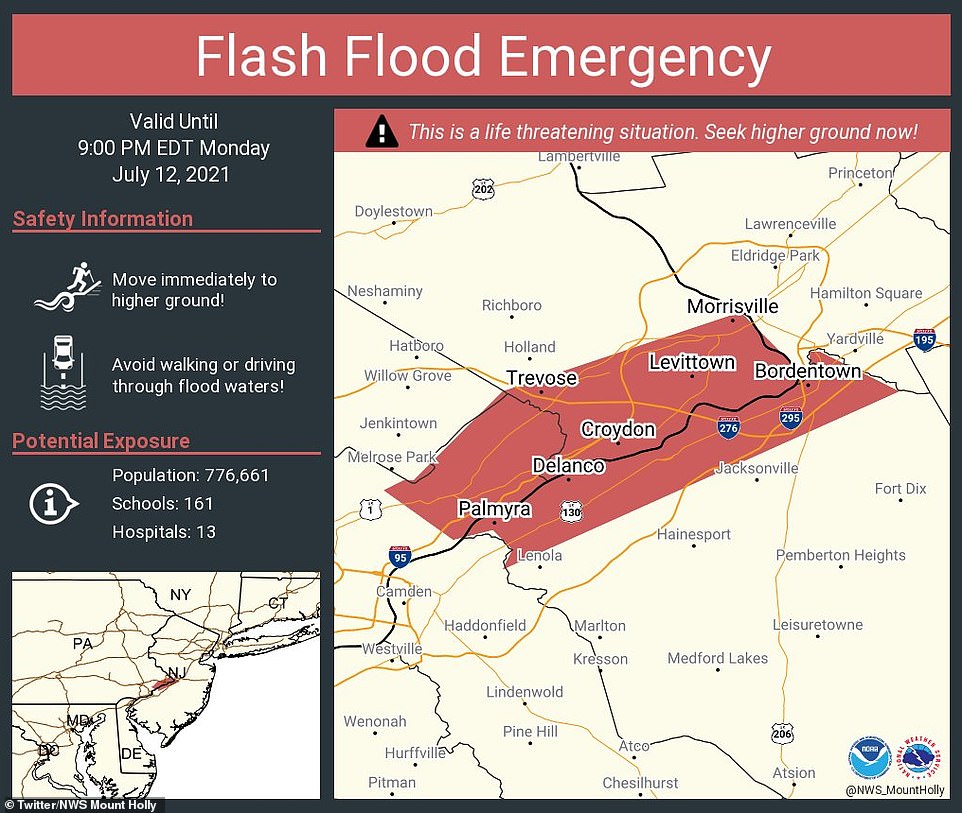 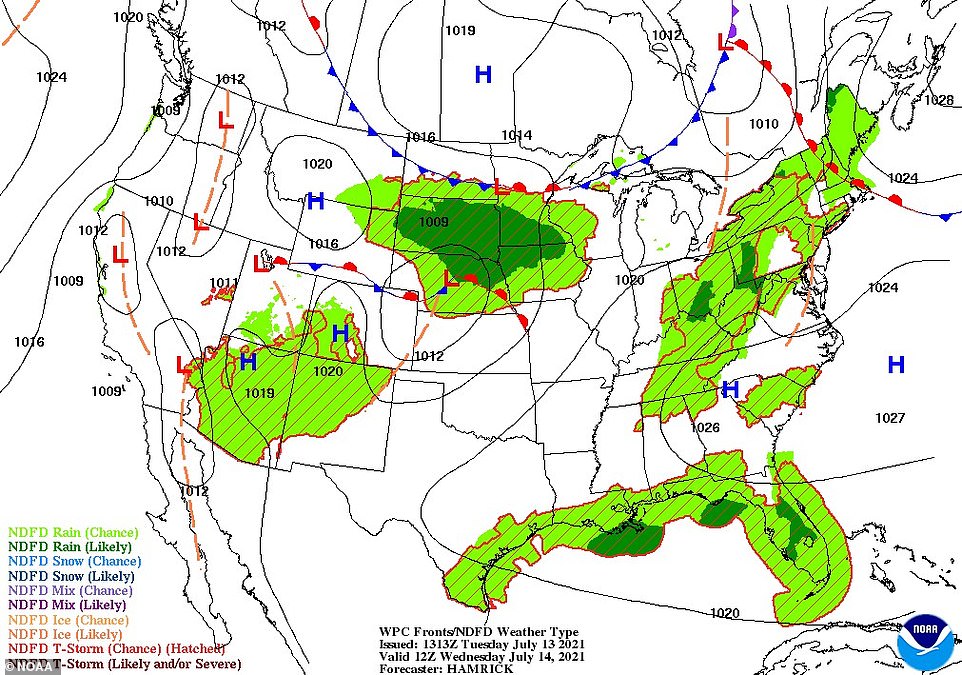 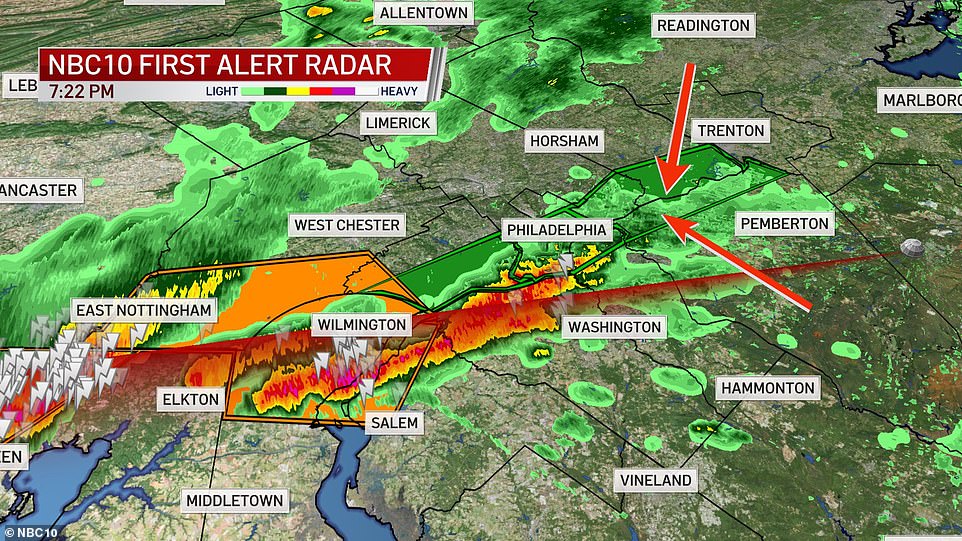 Krystal Klei, a meteorologist at NBC Philadelphia, shared the above chart, showing how the rain is weakening and shifting out of northeast Philadelphia, Bucks and Burlington 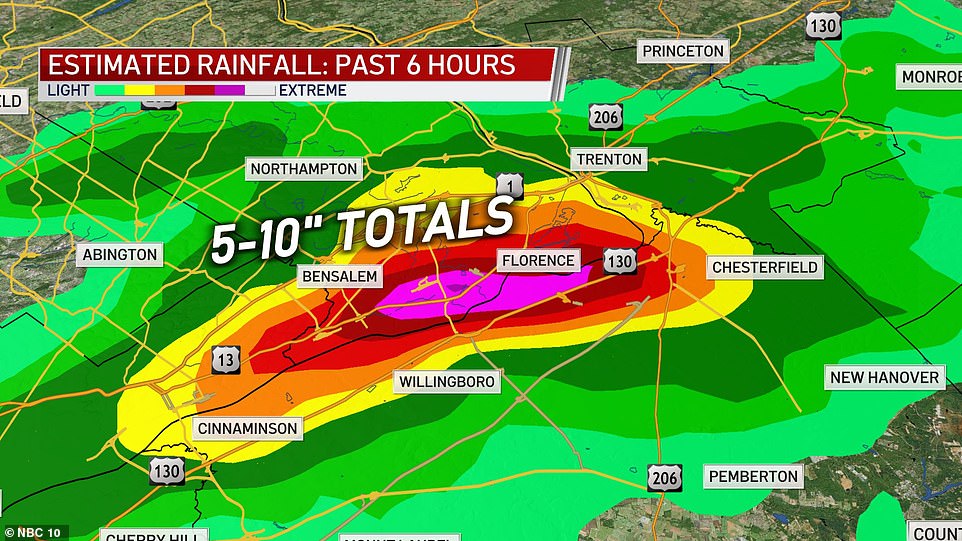 The meteorologist previously shared the above chart, saying how there were ‘flooding reports all over the place’ as they were in a ‘dangerous situation’ 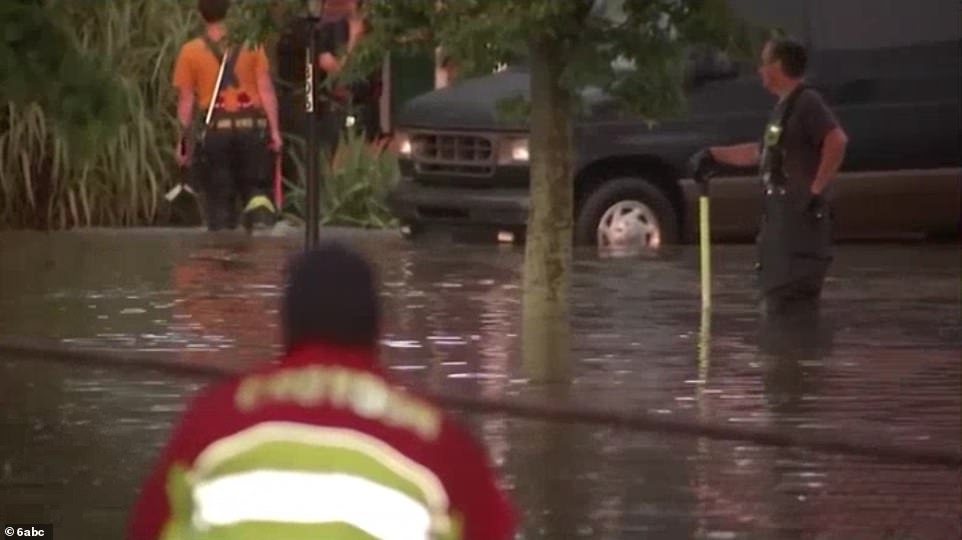 A car can be seen stranded in flood waters as rescuers stand by, knee deep in water sparked by a 100-year flood 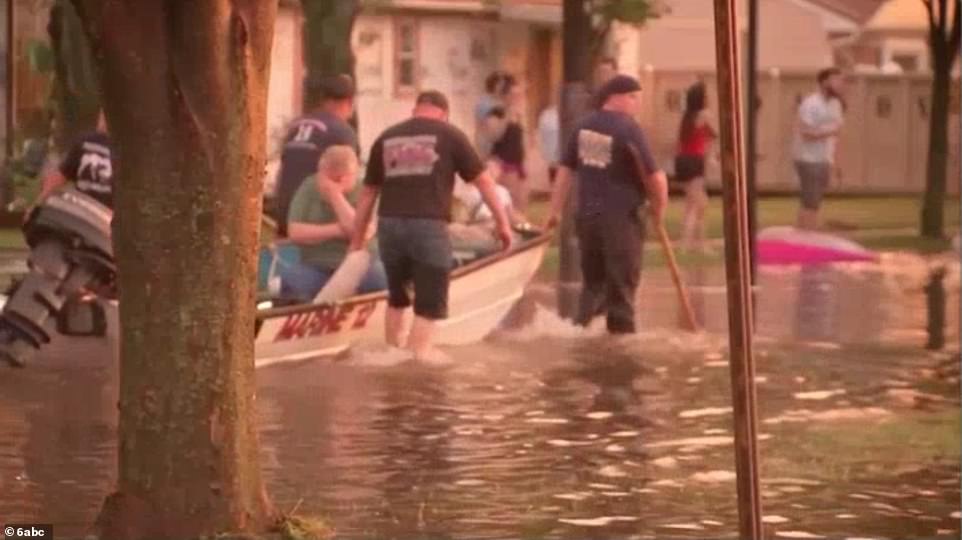 A man holds his head in his hands as he is evacuated on a boat by rescuers who walk through the deep, devastating floods 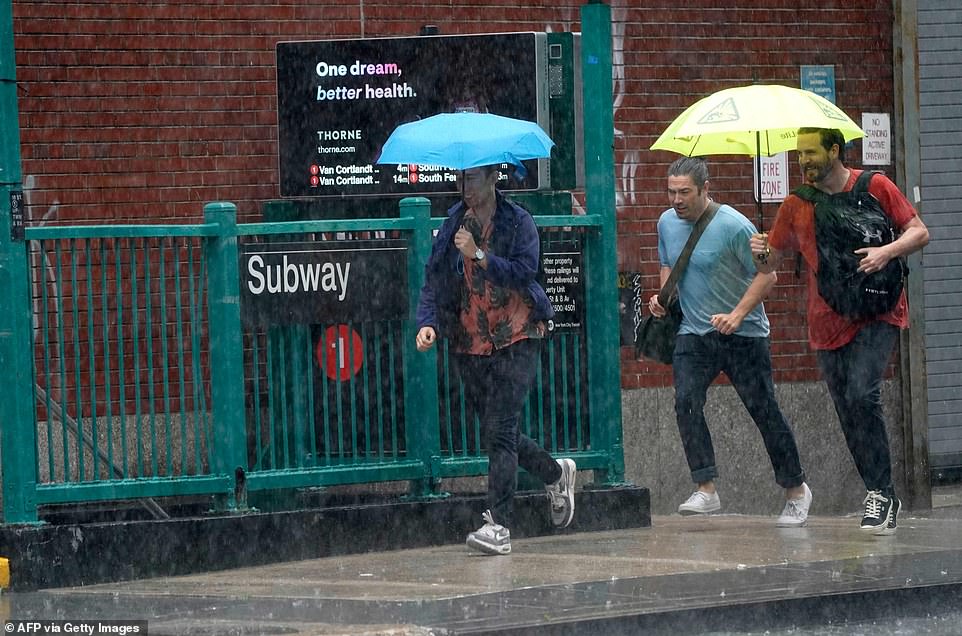 New York is heading to set the record for the wettest July in the city amid rainstorms. It is already the wettest start to July recorded in the city, following another heavy rainstorm forecast to hit yesterday 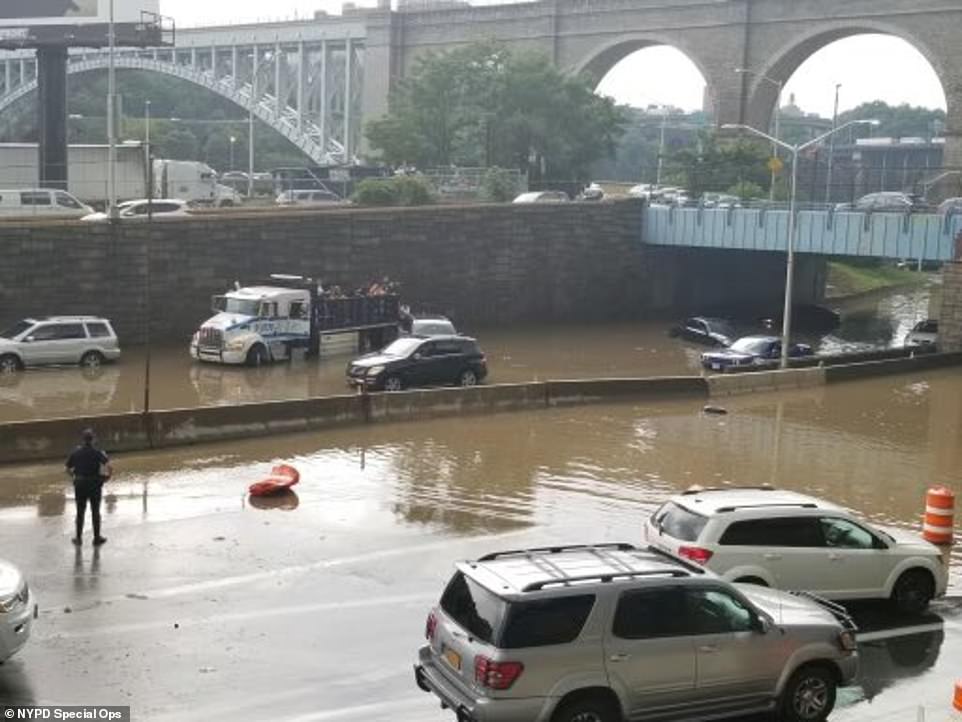 During the first 10 days of July, Central Park recorded 8.5 inches of rain which is the highest total recorded for the period for the city, NY Daily News reported.

It is currently expected that it will beat the record for the highest rainfall for July, which was 11.89 inches, set in 1889.

But the severe weather gave New Yorkers a taste of what could have been in store for them as Elsa was predicted to arrive there by Friday afternoon with tropical-force winds and heavy rain. 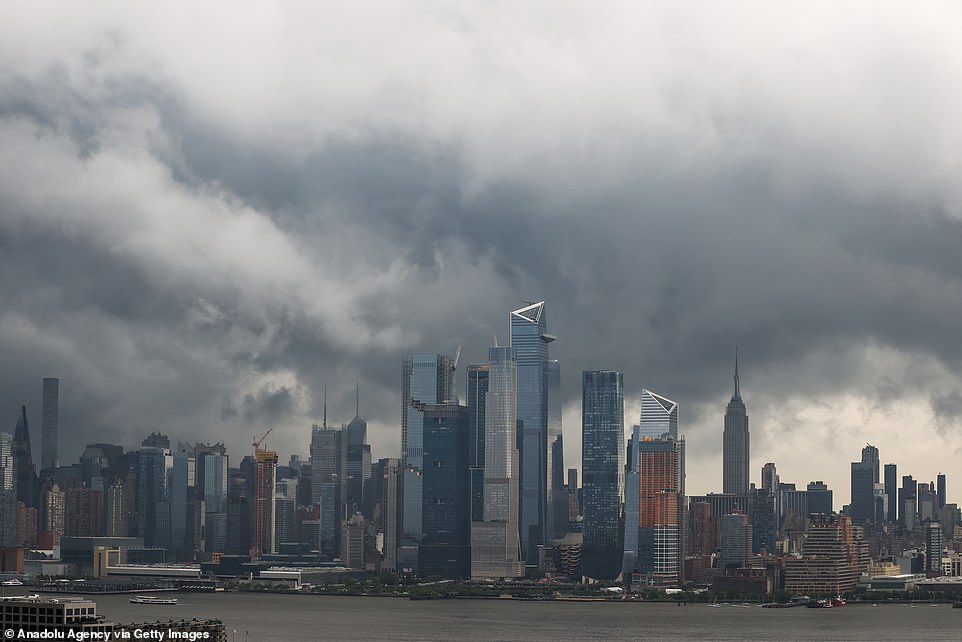 During the first 10 days of July, Central Park recorded 8.5 inches of rain which is the highest total recorded for the period for the city.  It is currently expected that it will beat the record for the highest rainfall for July, which was 11.89 inches, set in 1889

On the Major Deegan Expressway in the Bronx, the NYPD Strategic Response Group was deployed to rescue motorists whose vehicles stalled in deep water. They rescued several stranded motorists near 179th street in the University Heights neighborhood. 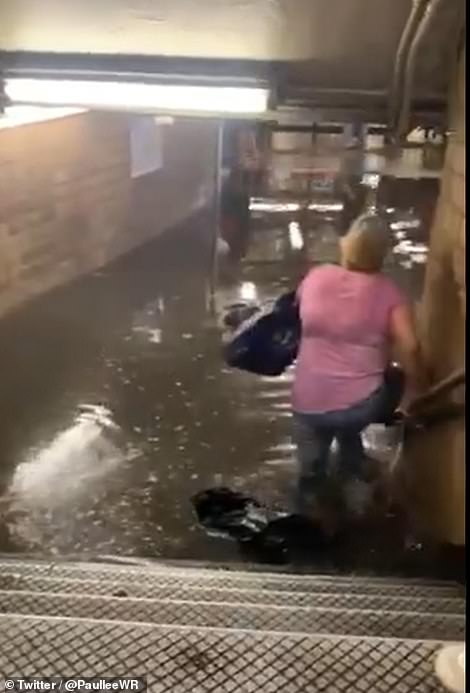 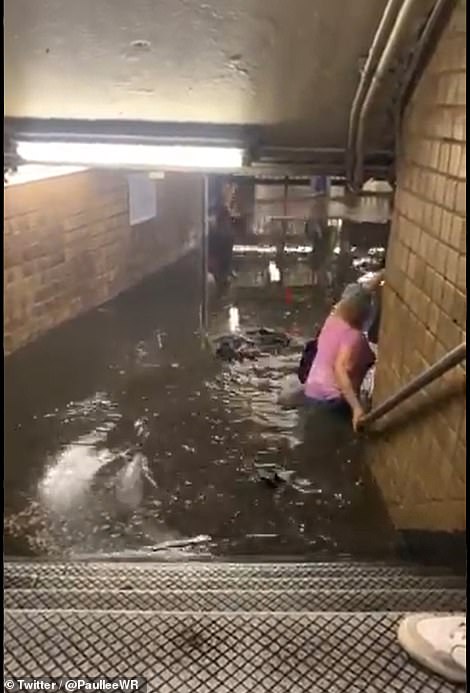 Demonstrations erupt across Florida in support of Cuban people, call for end of communist regime