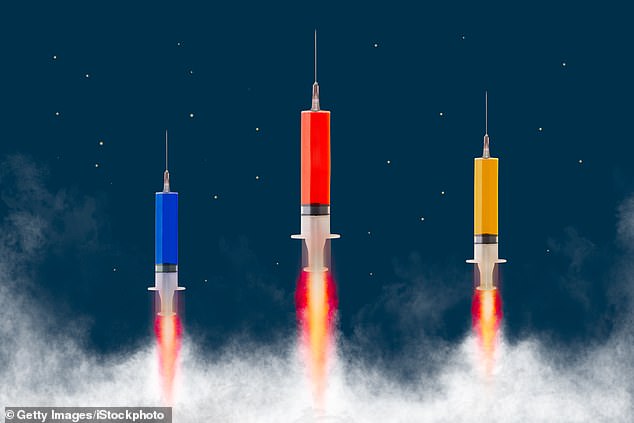 The Covid-19 vaccines being rolled out across the UK are a modern-day miracle. It is a wonder such safe and effective vaccines were produced, tested and delivered in such record-breaking time — a real triumph of science, offering hope that our lives will soon return to normal.

Yet just as remarkable as the speed and efficiency with which these vaccines have been produced is the brand new technology behind some, which is set to transform our fight against other infectious diseases, and even cancer.

I first got sight of the power of these new vaccines last March when I spoke to Professor Robin Shattock, who is head of mucosal infection and immunity at Imperial College London, for a film I was making about Covid-19.

The Covid vaccines are a modern day miracle, offering hope our lives will soon return to normal

Professor Shattock — whose lab in St Mary’s Hospital, Paddington, is just above the room where nearly 100 years ago Sir Alexander Fleming discovered that a fungus called penicillium could kill bacteria — showed me a fridge containing a new type of vaccine which he hoped to use against Covid.

Usually a vaccine is made with a killed or weakened strain of the virus against which it is targeted.

Once injected, it fools the immune system into thinking it’s under attack, giving the body valuable time to line up its defences before being attacked for real.

The approach used by Professor Shattock is very different. Instead of the actual virus, he uses short stretches of genetic material called mRNA (messenger RNA), which contain the code that the virus uses to create the club-shaped spikes on its surface.

An mRNA vaccine works by triggering the body to start producing lots of copies of those harmless club-shaped spikes.

This provokes the immune system to produce lots of Covid-specific antibodies and killer T cells (and to reassure those anxious about this, these vaccines have nothing to do with genetic engineering; there’s no chance they’ll alter your DNA).

Two out of the three vaccines approved in the UK, the Pfizer and Moderna vaccines, are based on this mRNA technology.

Trials of the Imperial vaccine have unfortunately been hampered by these other vaccines’ success, but Professor Stattock hopes to run them in other countries.

But, as he recently told me, the great thing about mRNA vaccines is that not only are they safe and effective, but if the coronavirus mutates, the current vaccine can be rapidly ‘tweaked’.

Professor Shattock thinks these mRNA vaccines will prove to be a powerful new weapon against Covid-19 and also a range of other diseases, including flu, TB, HIV —and cancer.

As well as fighting infection, one of your immune system’s key roles is to seek out and destroy cancer cells. The problem is some cancers evade detection until it’s too late.

Using mRNA technology, however, scientists could biopsy a patient’s cancer and identify the genes responsible for the ‘mutant’ proteins found in the disease — once they’d identified those genes, they’d tailor-make an mRNA vaccine, with a chemical booster, to activate the immune system to seek out and destroy the tumour.

If that sounds a bit futuristic, in fact it’s already been done. Back in 2017 researchers at BioNTech, the company that produced the Pfizer Covid vaccine, reported the early human trials using this approach on 13 patients with malignant melanoma, who all showed signs of improvement. One, a 52-year-old American man whose cancer had spread to his liver, was reported as saying: ‘My tumour started to disappear in front of my eyes’.

It’s early days, but there’s hope the war against Covid-19 will produce breakthroughs that, in time, will enhance many more lives.

Give the vaccine some va-va-vooM

In the meantime, what, if anything, can you do to ensure you get the best protection from the Covid jab when you get it?

Because the vaccines are brand new, we don’t yet know for sure if any lifestyle changes can boost their effectiveness, but based on studies on flu vaccines, here are some strategies you could try:

1 If you’re overweight or obese, try to lose a few inches. A study published in the International Journal of Obesity in 2017 found that obese adults who had a flu jab were twice as likely to get the flu than people with a healthy BMI (body mass index).

Carrying too much weight, particularly around the waist, makes your immune system less effective. (It’s worth stressing that Covid vaccine trials have shown that obese people gained a high degree of protection.)

2 Boost your intake of prebiotics and probiotics. Prebiotics are foods rich in fibre that feed the ‘good’ bacteria in your gut — they include kidney beans, lentils, garlic, onions and many vegetables.

Probiotics are living bacteria found mainly in fermented foods such as sauerkraut, kimchi and natural yoghurt.

A review of studies published in the journal Nutrients in 2017 found that consuming prebiotics and probiotics before being vaccinated nearly doubled the number of people who subsequently developed protective levels of antibodies.

For simple recipes to boost your good bacteria, check out instagram.com/drclarebailey.

3 Get a good night’s sleep. In a study last year from the University of California, researchers found that healthy volunteers who had the least sleep the night before having a flu jab produced the lowest level of antibodies to the flu in the months afterwards.

This is because as you sleep, your body produces many important components of your immune system, such as antibodies and killer T cells.

4 Exercise your arms. A study from the University of Birmingham a few years ago showed that people who did this a few hours before a flu jab developed a stronger immune response. It’s not clear why, but I’ll certainly be doing some press-ups and other arm workouts before my jab.

5 Stop smoking. A number of studies suggest that smoking can really reduce the effectiveness of vaccines – probably because of its effect on the immune system.

Quarantine hotels are a bad idea…and I should know

I was surprised to hear the Government is seriously considering introducing quarantine hotels, similar to the ones in New Zealand and Australia, to try to reduce the threat of coronavirus variants entering the UK.

I think this is a really bad idea. For starters, I suspect it’s already way too late to stop new variants sneaking in.

One thing we have learned from the past ten months is that this virus moves quickly, and often seems to be many steps ahead of us (until the new vaccines put paid to that).

And while closing borders and using quarantine hotels has worked brilliantly in countries such as Australia and New Zealand, the virus is too entrenched here to do this.

There’s also a significant downside, in terms of mental health, from asking people to stay cooped up in a small room without daylight for an extended period.

Having recently spent two weeks in a quarantine hotel in Australia, with my wife, Clare, I can assure you that it’s extremely challenging.

You are not given a choice about which hotel or which room, and you pay between £1,500 and £2,500 for the dubious pleasure of being locked up for 24 hours a day (our room had a view of a brick wall). I suffer from mild claustrophobia and there were times when I wasn’t sure I could bear it.

The worst thing is you’re not allowed out of your room, not even for a brief walk (which is clearly tough for the 72 tennis stars now in one such hotel in Melbourne ahead of the Australian Open).

A friend who stayed in one of these hotels said she once heard someone screaming, for what seemed like hours, in the next room. When she rang reception she was told not to worry — ‘they’re probably just having a panic attack’.

If you do ever find yourself in a situation like this, what you need is a really calm and reassuring companion like Clare.