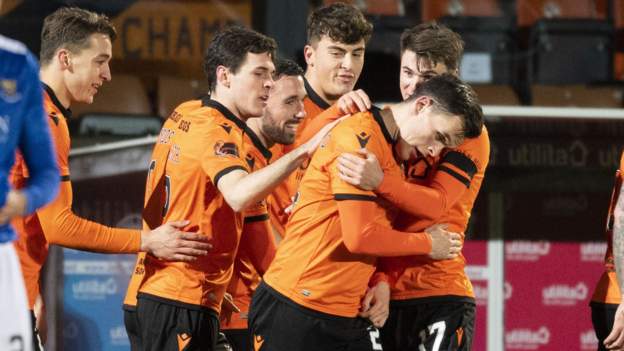 The Scotland striker launched an inch-perfect shot from just inside the opposition half, which flew over Zander Clark into the top corner and stirred stunned celebrations.

It hauled United – who had led through Louis Appere – back level after headers from Guy Melamed and Chris Kane edged St Johnstone in front.

The equaliser, which was struck from wide on the right of the pitch and measured at 52.98 yards out, was a fitting tribute to United’s legendary manager Jim McLean in his former side’s first home match since his death.

The form of both sides did not foretell the quality of the match, with St Johnstone winless in nine league matches, and United with just two victories in the same period. The last two meetings between the sides had both been forgettable goalless draws too.

But the home side, who are starting to show a more adventurous side to their game, started strongly and produced a slick move to carve open the first goal.

Liam Smith fed Nicky Clark, whose one-two with Shankland allowed him to drive to the byeline and deliver across goal, where Appere was waiting to turn home.

But until Shankland’s ridiculous intervention, that strike was the peak of United’s fluency as St Johnstone impressively wrestled control of the match.

Melamed, the summer signing from Maccabi Netanya, has been a peripheral figure so far this season but was a menace all night for the visitors, and he took full advantage when United failed to follow his run at a corner to head home from six yards.

The striker was also involved in the build-up to his side’s second goal, as he outmuscled Lewis Neilson before setting up David Wotherspoon to cross beautifully for Kane to glance the ball into the bottom corner.

Both teams – who average fewer than one goal per game this term – attacked the second half, but it was St Johnstone who continued to carve open the better opportunities.

Melamed forced a fine stop from Benjamin Siegrist in the home goal, and might have done better with his finish when gifted a path to goal by a poor pass, while Wotherspoon also had further efforts saved.

But it was Shankland’s ridiculous goal which stole the show. The 25-year-old had only scored three times all season prior to this match, which illustrates how frustrating a campaign he has had.

He had no margin for error as he attempted to catch Clark off guard, and duly dispatched to remind everyone exactly what he is capable of.

Man of the match – Guy Melamed

Shankland’s still got it. A prolific scorer at Championship level, his impact in the top-flight has been unremarkable so far. In his defence, he began the season injured and United’s tactics have been on the conservative side, which means he has often been isolated up front.

But manager Micky Mellon has spoken recently of a switch to a more proactive approach, which was in evidence here, and if it continues Shankland, with his finishing prowess, will surely shine.

As for St Johnstone, they are 10 games without a win in the league but continue to turn in good performances. They, much like United, draw a lot of games – that’s now five in their last 10 – usually due to a failure to take their chances.

Melamed looks like he could be the player to transfer some of those stalemates into wins. He looked sharp in the box, and got in goal-scoring positions regularly. Manager Callum Davidson will hope more minutes on the pitch will sharpen his finishing.

Dundee United manager Micky Mellon: “The second half was crying out for that wee bit of quality, which you certainly saw with Lawrence Shankland’s goal.

“He knows what he’s going to do before the ball comes to him and he executes it brilliantly. If there’s many better goals than that this season then I’ll be delighted to see them.”

St Johnstone manager Callum Davidson: “I thought we were probably the dominant team. We probably should’ve taken our chances when we had them to see the game out.

“Sometimes you’ve got to hold your hands up and say, ‘what a goal’. There’s no blame on Zander Clark.”

Staying Apart, Together: We're emotionally exhausted. But we can get through it.

Coronavirus in winter: ‘This time of year is harder than lockdown’

US has a ‘backlog’ of SIX MILLION coronavirus vaccines doses