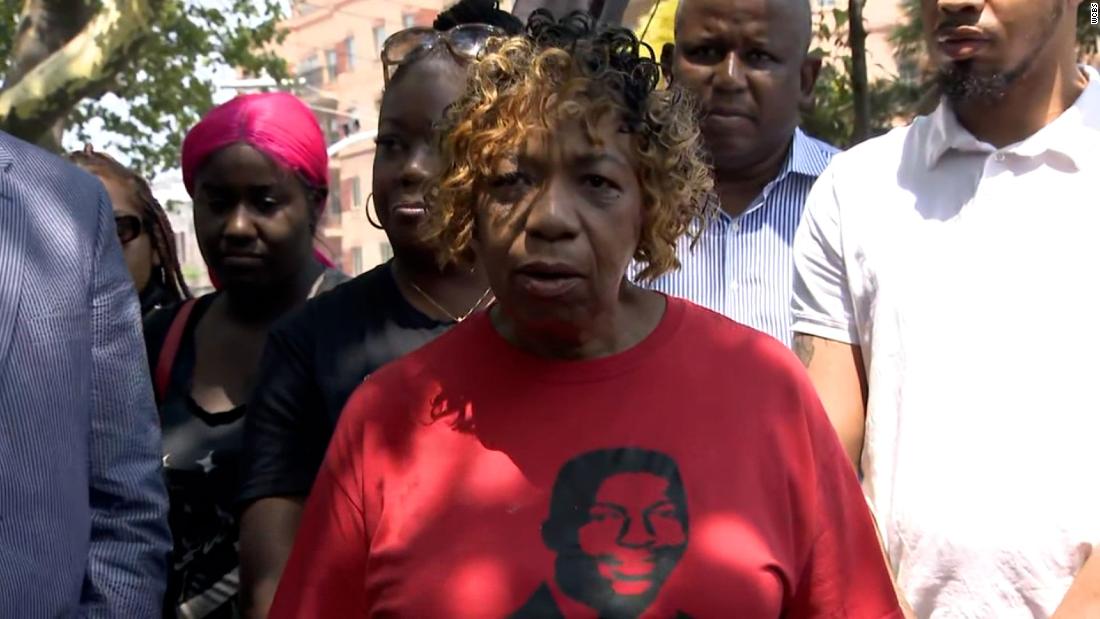 “Seven years ago today, my son was murdered,” Garner’s mother, Gwen Carr, said at the event on Staten Island.

Garner died after he was put in an unauthorized chokehold by New York City Police Officer Daniel Pantaleo on July 17, 2014. Video of Garner crying out “I can’t breathe” during the encounter sparked protests across the US. Those last words have become a rallying cry used in demonstrations across the country over the deaths of Black people at the hands of police. The same words were used by George Floyd, a Black man who died last year after a Minneapolis police officer kneeled on his neck.
Carr said Saturday she’s reliving her son’s death “but, I’m coming to grips with it by fighting for him,” she told CNN affiliate WCBS. “We’re still going to court about it and we’re still trying to get the officers to stand accountable — the ones who were responsible for my son’s death that day.”
Pantaleo was never charged in Garner’s death, but was fired in August 2019 after an administrative judge overseeing a police department disciplinary trial found him guilty of using a chokehold on Garner.

On Thursday, an appellate court judge decided to allow Garner’s family to question “violations and neglect of duty” by the NYPD and New York Mayor Bill de Blasio’s administration in connection with Garner’s death.

“We find that this is the rare case in which allegations of significant violations of duty, coupled with a serious lack of substantial investigation and public explanation, warrant a summary inquiry to bring transparency to a matter of profound public importance: the death of an unarmed civilian during the course of an arrest,” Appellate Division Judge Anil C. Singh wrote in his decision on the matter.

The decision sets up a judicial inquiry, which will begin on October 25 in the New York State Supreme Court, according to attorneys for the Garner family.

The judicial inquiry will investigate alleged violations and neglect of duties by de Blasio, former NYPD Commissioner James P. O’Neill, and other New York officials regarding, “the killing of Mr. Garner, failure to conduct thorough investigations and discipline for misconduct, and the related cover-up,” according to a press release from the attorney for the Garner family, Gideon Oliver.

CNN has reached out to de Blasio’s office for comment, as well as O’Neill, Fire Department Commissioner Daniel A. Nigro, and the NYPD’s Deputy Commissioner in charge of the Department Advocate’s Office, Kevin Richardson.

The NYPD deferred to a statement from the city’s law department.

“So much information about this incident has been made publicly available and there is no evidence that the Mayor or any other senior City official neglected their duties or violated the law,” a New York City Law Department spokesperson told CNN.

“The Court acknowledged that summary inquiries should remain exceedingly rare, but concluded that this one is exceptional and should go forward. We are reviewing our options,” the spokesperson said.

Pantaleo’s disciplinary records were released in June 2020, revealing that he had seven misconduct cases investigated against him before Garner’s death.

The release of the records came after the New York State legislature repealed a law known as 50-a, which shielded police disciplinary records from being viewed by the public for years.

“I’m so glad for the transparency,” Carr told CNN at the time. “I just think going forward we shouldn’t have to fight and wait five years to get the disciplinary records of the police officers who recklessly kill.”

Garner’s death happened just weeks before the death of Michael Brown in Ferguson, Missouri, bringing the Black Lives Matter movement to the forefront as much of the nation called for police accountability.

Garner, a 43-year-old father of six, was allegedly selling loose cigarettes illegally on Staten Island when police attempted to arrest him.

In video of the arrest, Pantaleo can be seen wrapping one arm around Garner’s shoulder and the other around his neck before jerking him back and pulling him to the ground.

The departmental disciplinary trial focused on whether the chokehold Pantaleo used was banned by the department.

Pantaleo denied that he used the maneuver, but Deputy Commissioner of Trials Rosemarie Maldonado ruled that a chokehold triggered a series of events that culminated with Garner’s death, according to her report, which CNN obtained.

“Here, (Pantaleo’s) use of a chokehold fell so far short of objective reasonableness that this tribunal found it to be reckless — a gross deviation from the standard of conduct established for a New York City police officer,” Maldonado wrote. “Moreover, (Pantaleo’s) glaring dereliction of responsibility precipitated a tragic outcome.”