Scotland has been engulfed by football fever today as the country plays its first major tournament match since 1998 with up to 500,000 schoolchildren set to watch football in class because it is considered a ‘cultural event’ for the success-starved nation.

The game with the Czech Republic will be played at Hampden Park in front of 12,000 fans before the Tartan Army head to Wembley to play the Auld Enemy, England, at Wembley on Friday night.

Scottish children will be allowed to watch their country play in their first major tournament match in 23 years on Monday – as long as their schools give the go ahead with the team’s players also backing the decision.

Kick off is at 2pm – before the end of the school day of between 3.15pm to 3.30pm – with football set to replace traditional lessons this afternoon.

One headteacher, Wendy Cameron of Broomhill Primary in the west end of Glasgow, declared: ‘Maths worksheets and workbooks won’t create memories as good as watching the match.’

On top of the game being shown in the majority of classrooms across the country, millions will be watching in beer gardens or back gardens while a minority have either tickets for the game or the fan park in Glasgow.

Big screens have gone up outside pubs and bars with Scotland set to grind to a half for its European Championships opener – the first major tournament match for 23 years. Some of Steve Clarke’s squad were not even born the last time Scotland took part in a major finals, at the World Cup in France in 1998. 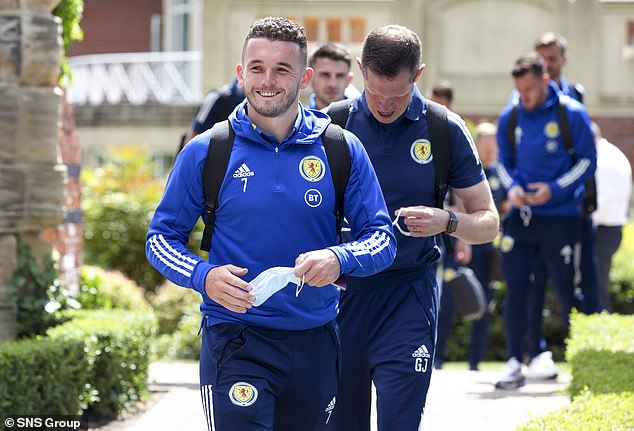 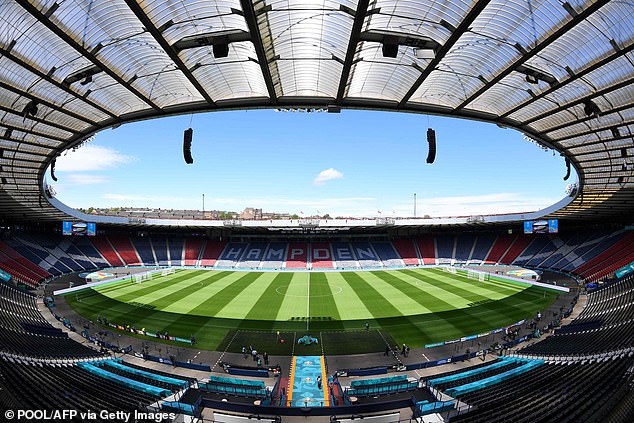 The game with the Czech Republic will be played at Hampden Park in front of 12,000 fans before the Tartan Army head to Wembley to play the Auld Enemy, England, at Wembley on Friday night 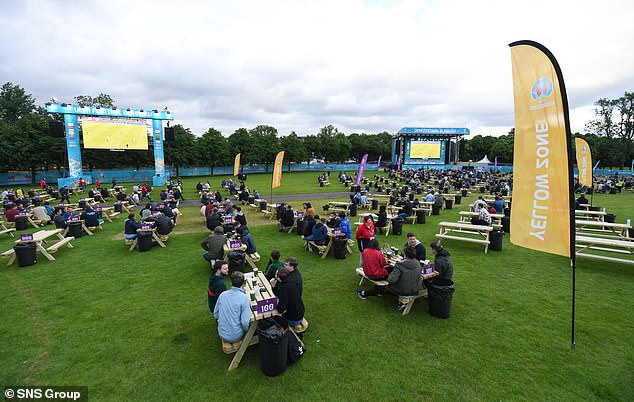 The Glasgow Green fanzone will be showing the match but only around 6,000 have tickets when it could host 80,000 before the pandemic

Inside Hampden Park, where tickets were last night available online for £600, there will be 12,000 lucky souls inside the stadium, which has been fortified by a ring of steel to prevent fans congregating outside.

Once people with tickets are verified, temperature checked and permitted entry, the organisers also want to keep them inside.

And in a restricted Covid world, supporters are leaving nothing to chance. The Glasgow Green Fan Zone, with its wooden benches and giant screens on the banks of the River Clyde, is already sold out.

3,000 will be seated for the game with 3,000 more allowed access this evening in outdoor area able to welcome 80,000-plus people in pre-pandemic times.

The tables have been placed 2m apart in line with social-distancing requirements – and people lucky enough to go must wear masks at all times unless when sitting down.

Booze will be served but only with table service to avoid thirsty fans queuing at the bar.

Their heroes — Scotland’s players achieved such status simply by qualifying — landed at Glasgow Airport yesterday afternoon, flying north from their training base in Darlington.

If Clarke and his squad were in the dark as to the bubbling fervour in their homeland having spent the last two weeks in Spain and England, then the drive from the airport to their hotel was enlightening, if a little frightening.

‘I was a bit nervous on the M8 when all the cars were slowing down to toot their horns,’ said Clarke. ‘They were swerving to avoid each other. But everyone wanted to wish us well, and that’s great. So we’re definitely aware of the magnitude of this game and know what it means to everyone.’

Captain Andy Robertson was certainly supportive of her words.‘Rightly so,’ said the Liverpool defender. ‘I hope the schools give them a special pass to watch the game. ‘This has been a long time coming. A lot of kids, even teenagers and people in their early 20s, haven’t witnessed us in a major tournament. I hope the fact that is now happening will inspire the nation.

‘We could have sold out Hampden many times over. We could feel that buzz around Glasgow as soon as we landed. We’ll try to keep that smile on their faces.’

The Scottish Football Association had asked the Government to allow youngsters to watch the nation’s opening Euro 2020 match in classrooms so they are ‘inspired’. 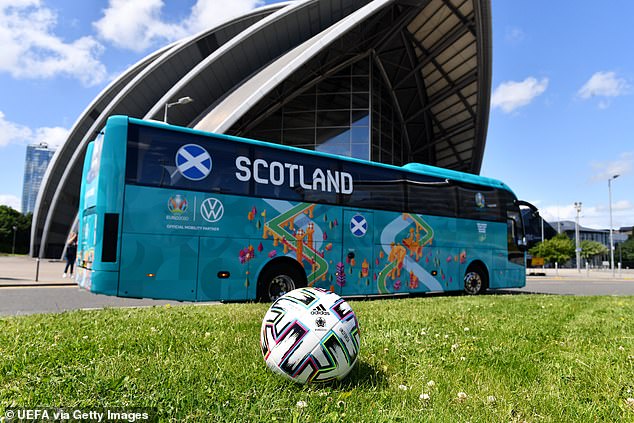 Scotland’s team will be backed by millions, most of whom will be at home or pub gardens 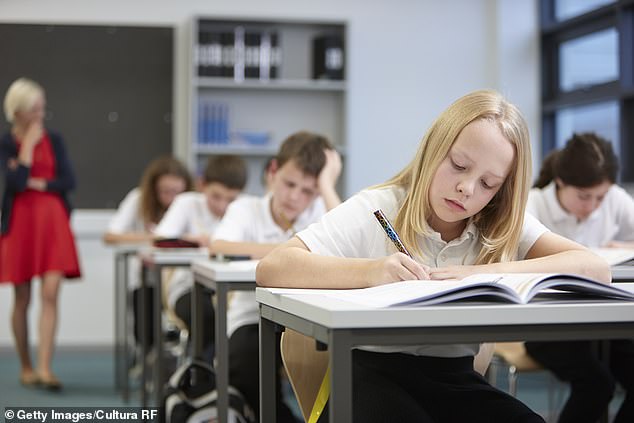 As a result SFA chief executive Ian Maxwell had called on schools to let children watch the Group D game.

A spokesman for the Scottish Government said it was up to schools to decide – but didn’t stand in their way.

He said: ‘This is a matter for schools, but Shirley-Anne Somerville (Cabinet Secretary for Education and Skills) knows that children and young people will be willing Scotland to win their first match on Monday.’

Mr Maxwell said: ‘With Uefa Euro 2020 fast approaching and our men’s A squad returning to a major tournament for the first time in 23 years, we want to use this as an opportunity to inspire the nation through our new strategy the ‘Power of Football’.

‘We know the last year has been challenging for everyone, in particular children, and we hope that with the first game against the Czech Republic we can help inspire a nation. At 2pm on June 14 we are encouraging schools all over Scotland to watch our opening game in the classroom and help us cheer the nation on.’

Scottish Labour’s education secretary, Michael Marra, said: ‘It’s a significant cultural moment to bind the nation together and young people need to have the chance to be part of it.’

Scotland’s remaining Group D games against England on Friday and Croatia on June 22 both kick off at 8pm.

Their last opening match in a major tournament ended in a narrow 2-1 defeat to Brazil in the 1998 World Cup in France.

It comes as it was announced this week Scotland will now join England in a show of solidarity by taking the knee at Wembley after reversing their original decision.

Manager Steve Clarke and captain Andy Robertson said on Thursday that they would continue to take a stand against racism – as they have done since March – rather than kneeling before matches, a symbol they believe has become ‘diluted’.

Scotland’s stance on not taking the knee will remain the same for their two other Euro 2020 group matches at Hampden Park, but Robertson has revealed that the recent booing of England’s players before matches has caused a rethink among their squad.

The Liverpool full back said: ‘Our position was – and remains – that the focus must be on meaningful change to fight discrimination in football and wider society.

‘In Scotland, the football family has stood against racism all season. It was our collective view that the national team would do the same.

‘Our stance is that everyone, players, fans, teams, clubs, federations, governing bodies and governments must do more. Meaningful action is needed if meaningful change is to occur.

‘But it is also clear, given the events around the England national team, taking the knee in this tournament matters as a symbol of solidarity.

‘For this reason, we have collectively decided to again take the knee as a team for the fixture against England at Wembley Stadium.’