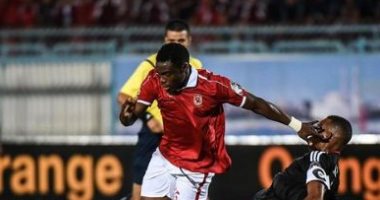 Gabonese Malik Evona, the former Al-Ahly club striker, commented on his country’s draw against the national team with one goal for each team, and the Egyptian team drew with its Gabonese counterpart with one for each team, in the match that took place between them today at Franceville Stadium in the second round of qualifying for the 2022 World Cup in Qatar.

Ivona said on his Twitter page: “Well done boys,” directing his speech to his colleagues in the Gabon national team, before he followed her with another tweet: “Good match for the team, see you in the next match.” Then he followed the two tweets with a new tweet in which he wrote, “I love Egypt.” “

Evona currently plays for Sfaxien of Tunisia and has recently moved away from the Gabonese national team.

The hosts advanced in the 72nd minute, signed by Jim Alvina, before Mostafa Mohamed equalized in the 90th minute, so both teams scored one point on their way to the World Cup.

Hossam El-Badry, coach of the Egyptian national team, maintained his unbeaten record with the Pharaohs, after a draw with the Gabon team, in the match that took place between them at Franceville Stadium in the second round of qualifying for the 2022 World Cup in Qatar.

The total of Egypt’s matches with Hossam El-Badry reached 10 matches, the Pharaohs won in 6 matches and drew in 34 matches, and the team’s players scored 14 goals with El-Badry and conceded 4 goals.