Experts reveal classic children’s books could be worth thousands


If you were a big reader when you were a child, your bookshelf could well be worth a fortune,’ according to experts.

Oxbridge Home Learning has analysed the value of hundreds of classic books, from The Hobbit to The Tale Of Peter Rabbit.

Oxbridge’s Head of Digital, Riman Verma, commented: ‘Books and stories can really shape us as children, and classic stories such as these hold a lot of really special memories for us as adults.

‘We often hold onto books like this well into adulthood, because of nostalgia, or not wanting to give away something that has such meaning. However, it can be fascinating to find out just how valuable these books can become over time.

‘If you think you may have one of these books, or any other classics, it’s worth seeing how much they could sell for with specialist sellers.’ 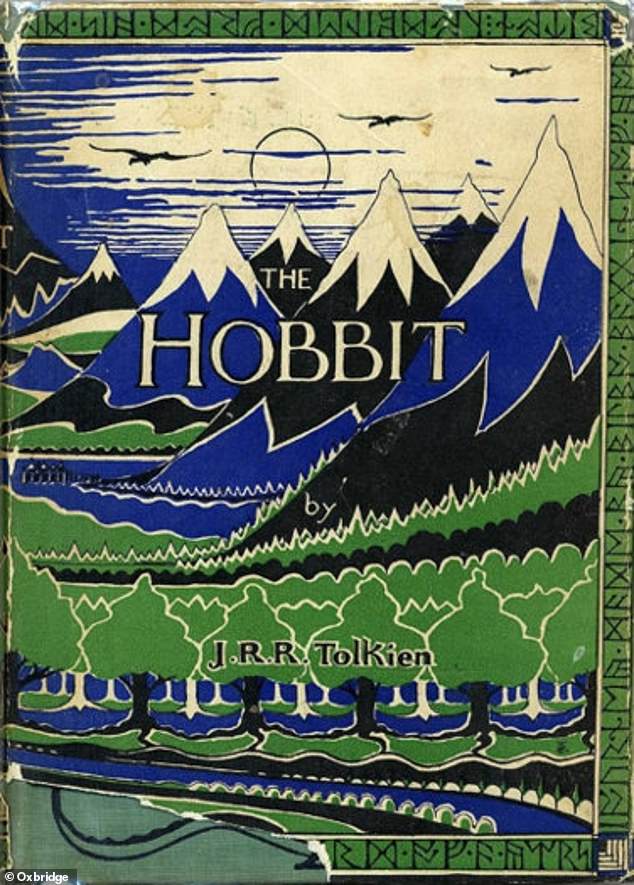 Published in 1937, The Hobbit by JRR Tolkien is a children’s fantasy story which could fetch you up to £10,000 if you have a first, second or second revised edition of the story

Published in 1937, The Hobbit by JRR Tolkien is a children’s fantasy story with wide critical acclaim.

The book remains popular today and is regarded as a classic in children’s literature.

If you have a first, second or second revised edition of the story, you could be sitting on a fortune as research shows that copies of this book can reach up to almost £10,000 in value.

HARRY POTTER AND THE PHILOSOPHER’S STONE 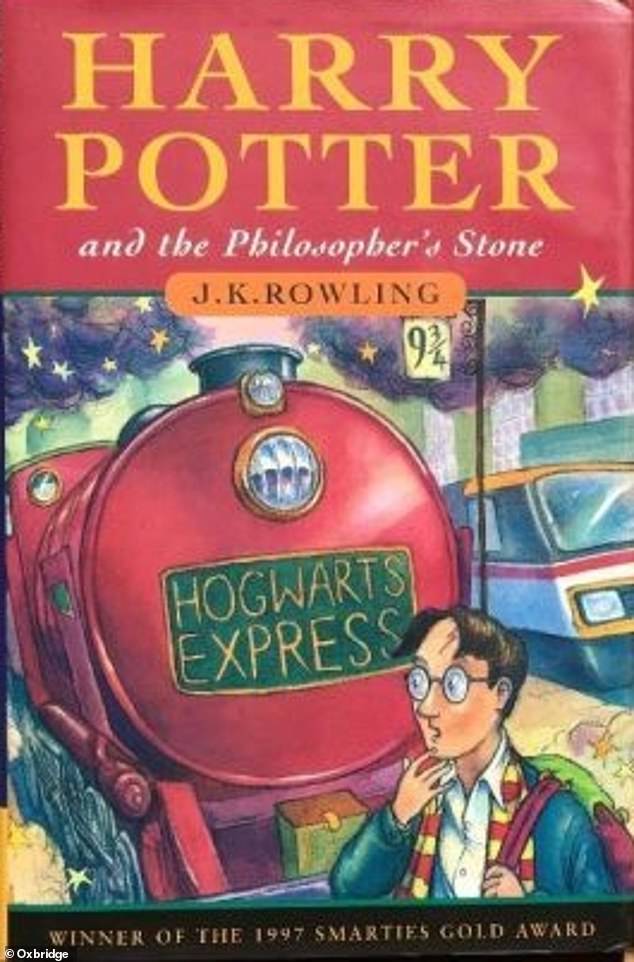 JK Rowling’s Harry Pottery series gained worldwide popularity, and if you have a true first hardcover edition (1997), you could have £95,000 sitting on your bookshelf

The first book of JK Rowling’s Harry Potter series, which spanned seven books and eight films, was released in 1997.

It has since gained worldwide popularity, selling more than 500 million copies worldwide, having been translated into eighty languages.

If you have one of the original versions, you could have up to a staggering £95,000 sitting on your bookshelf.

The first paperback edition first impression, published in 1997, could be worth £30,000.

THE CAT IN THE HAT 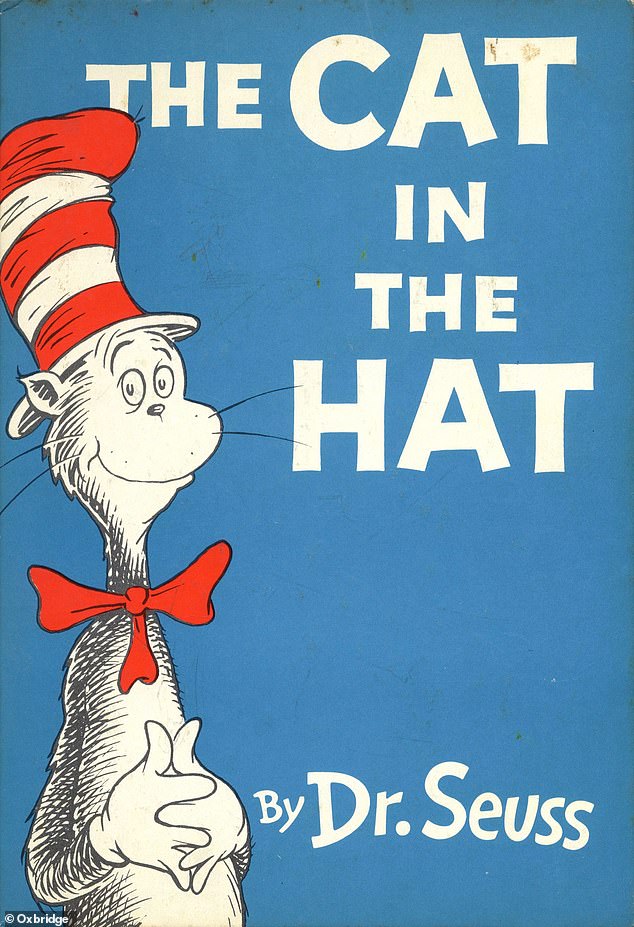 Many adults will have happy memories of reading the Dr Seuss stories as children, while a hardback first edition (1957) could get you £13,300

Most adults will have happy memories of reading the Dr Seuss stories as children, with their whimsical rhymes and magic illustration.

It might be time to make a new memory, as a hardback first edition (1957) of Dr Seuss’s The Cat In The Hat could get you a staggering £13,300, depending on the condition of your copy.

THE HOUND OF THE BASKERVILLES 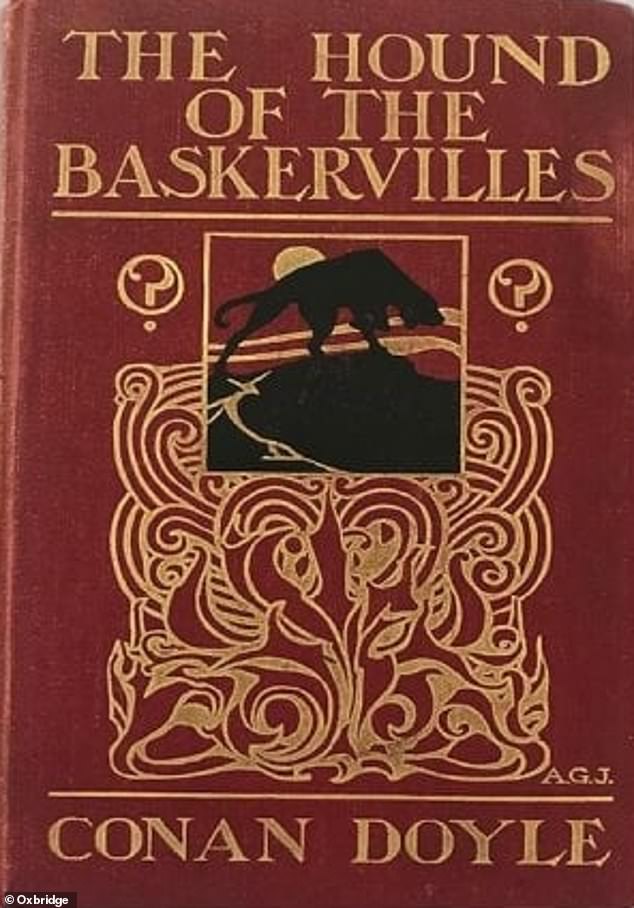 The Hound of the Baskervilles is Sir Arthur Conan Doyle’s third of four crime novels written by the famous author featuring Sherlock Holmes – and a first edition of the tale could get you £9,000

Sir Arthur Conan Doyle’s The Sherlock Holmes stories have been re-imagined numerous times to bring them into the modern day.

The Hound of the Baskervilles is the third of four crime novels written by the famous author featuring the detective.

It was a household favourite for many families and it could be a good idea for anyone who read the classic stories as a child or as an adult to rummage for old copies of the books.

Meanwhile, the hardcover first edition of the tale was valued by Oxbridge Home Learning as £9,000.

THE TALE OF PETER RABBIT 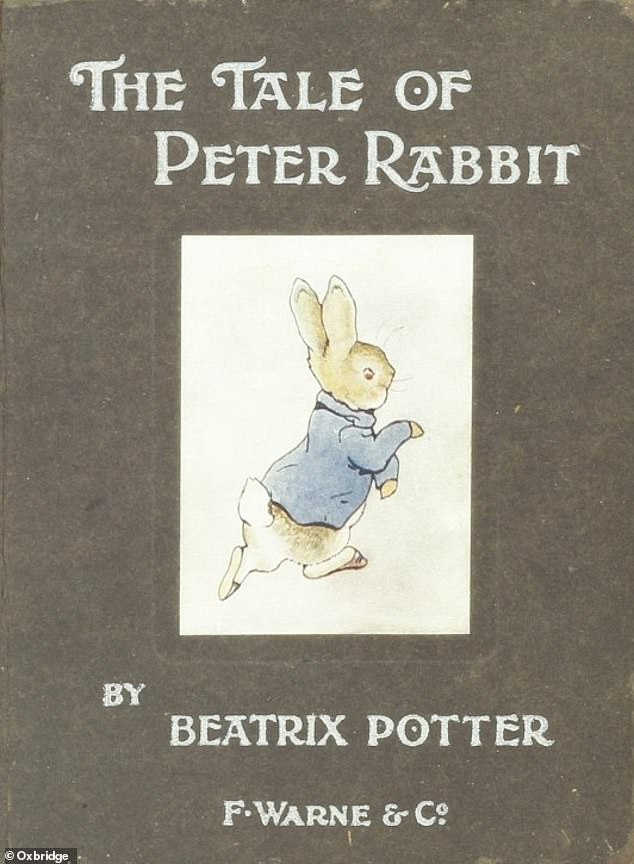 Beatrix Potter’s famous The Tale Of Peter Rabbit (1901) could fetch you £14,700 if you have a hardback first edition of the classic tale

Beatrix Potter’s The Tale Of Peter Rabbit (1901) follows a mischievous young rabbit called Peter as he gets into the garden of Mr McGregor.

A lot of merchandise for both children and adults have been made since the release of the popular children’s classic, including toys, dishes, and clothing.

It has remained popular among children for more than a century and has seen many adaptions through new book editions, TV series and films.

This beautiful classic from Beatrix Potter can reach almost £15,000 if you have a version sitting on your bookshelf.

A first trade edition, deluxe issue, was valued at £12,500 while a hardback first edition, first printing, could be worth a whopping £14,700.

THE WINNIE THE POOH COLLECTION 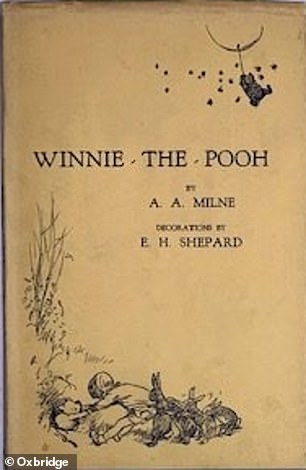 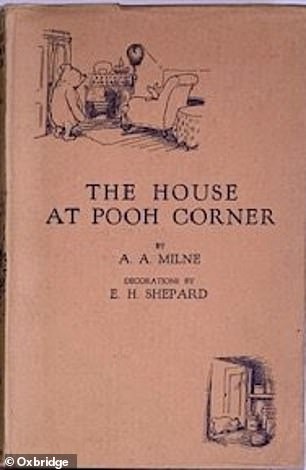 AA Milne’s Winnie-The-Pooh stories were some of the most popular stories to read to children and now a full collection of the well-loved classics (Winnie The Pooh, The House At Pooh Corner, When We Were Very Young and Now We Are Six) could be worth £17,500

A. A. Milne’s Winnie The Pooh stories were some of the most popular to read to children.

Do you remember reading the original stories and poems from the classic Winnie-the-Pooh collections, before Disney’s version became the more well-known image?

If so, check your bookshelves as the full collection of the four books (Winnie The Pooh, The House At Pooh Corner, When We Were Very Young, and Now We Are Six) could be worth around £17,500. 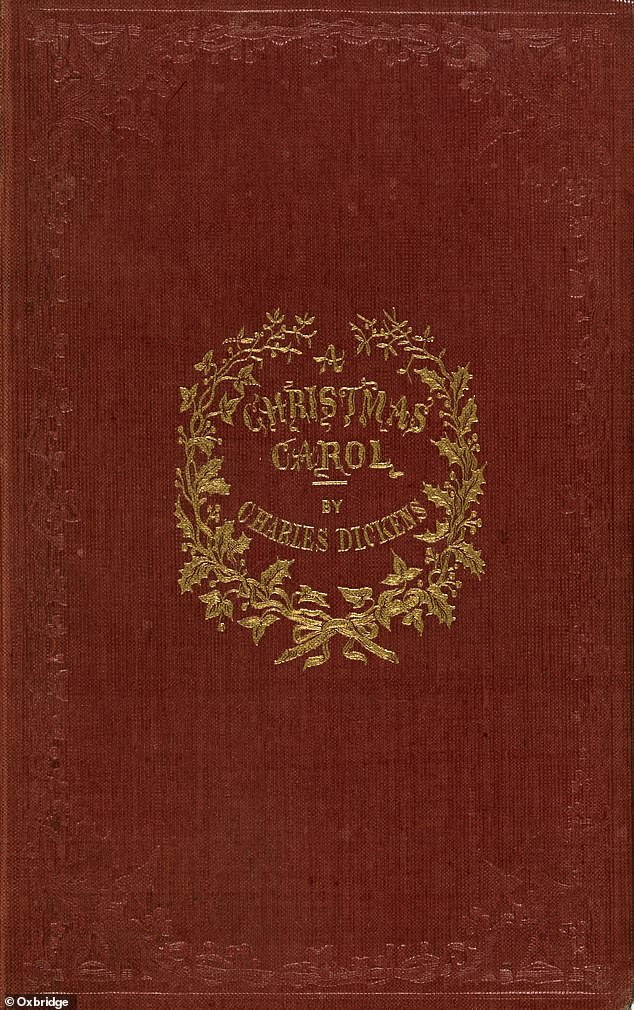 A true first edition of Charles Dickens’s Christmas Carol, the tale of Scrooge and his three Christmas ghosts published in 1843, could be worth £33,000

Charles Dickens’s Christmas tale of Scrooge and his three Christmas Ghosts is a classic which returns every festive season.

Meanwhile, a true first edition, first printing, also published in 1843, is expected to fetch around £33,000. 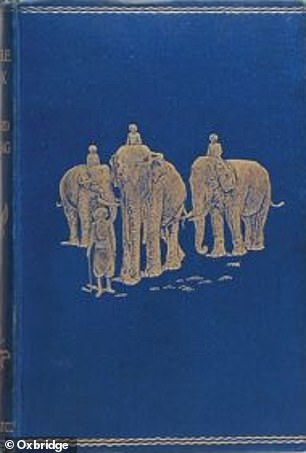 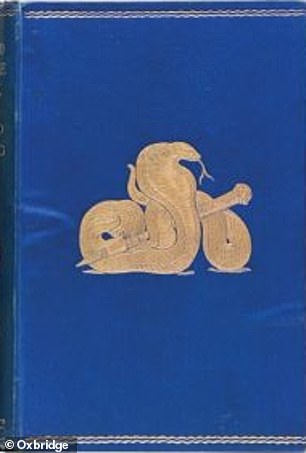 The original stories that Disney based their well-loved Jungle Book movie on could be worth up to £6,650 if you have a first edition on your bookshelf

The Jungle Book and Second Jungle Book, published in 1894-95, could also fetch you a lot of money.

The original stories that Disney based their well-loved movie on are filled with magic and wonder. 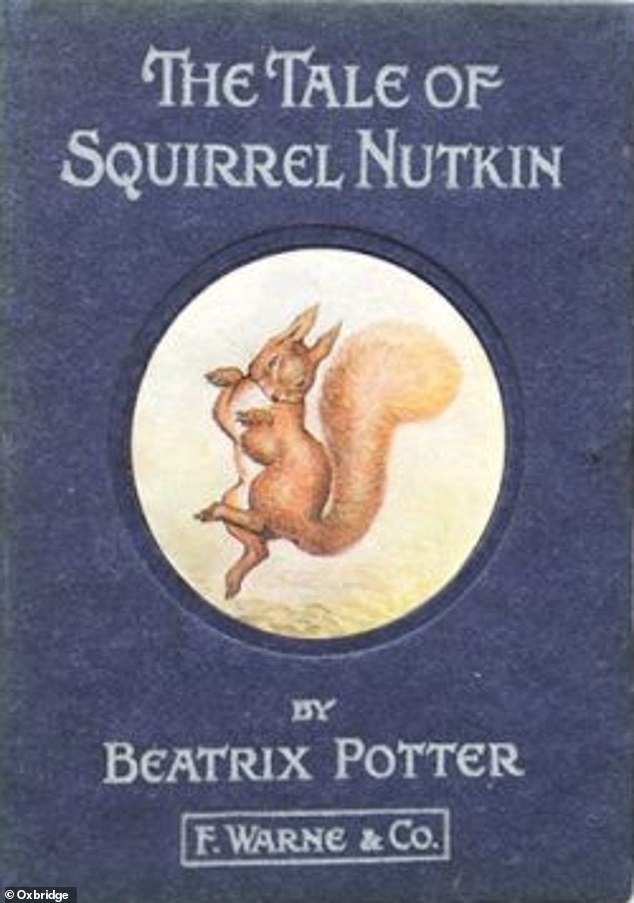 Beatrix Potter’s charming illustrations have been winning the hearts of children for more than 120 years, and if you have a first trade edition with deluxe binding (1903), you could have £4,500 sitting on your bookshelf

Beatrix Potter’s charming illustrations have been winning the hearts of children for more than 120 years.

Telling the story of a red squirrel called Nutkin and his escape from an owl called Old Brown, the book followed the hugely successful The Tale Of Peter Rabbit and was an instant hit.

These days copies of her famous tale can be worth upwards of £1,500.

Meanwhile, if you have a first trade edition (deluxe binding), also published in 1903, you could have £4,500 sitting on your bookshelf.

NASA to attempt historic flight on Mars with Ingenuity helicopter