Champions Manchester City signed off the 2020-21 Premier League season in style by thrashing Everton 5-0 before lifting the trophy in front of 10,000 supporters at Etihad Stadium.

Rivals Manchester United beat Wolves 2-1 and finished second, while Liverpool ended a difficult season on a high by beating Crystal Palace 2-0 to take third, with Chelsea fourth despite a 2-1 loss at Aston Villa.

Leicester failed to secure Champions League qualification once again as they went down 4-2 at home against Tottenham, who finished seventh.

West Ham ended an excellent season by beating Southampton 3-0 to take sixth place and a spot in next season’s Europa League. Despite Arsenal beating Brighton 2-0, the Gunners finished eighth and missed out on Europe.

Check out my team of the season and then make your own selections towards the bottom of the article. 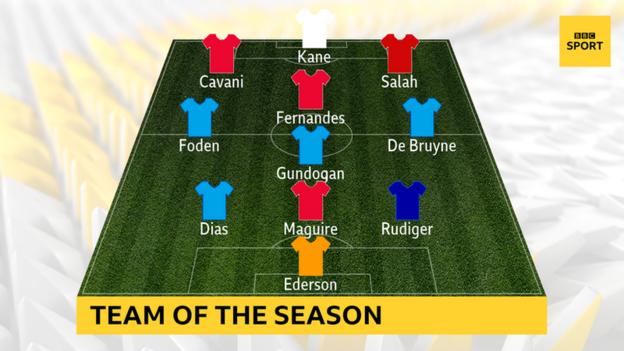 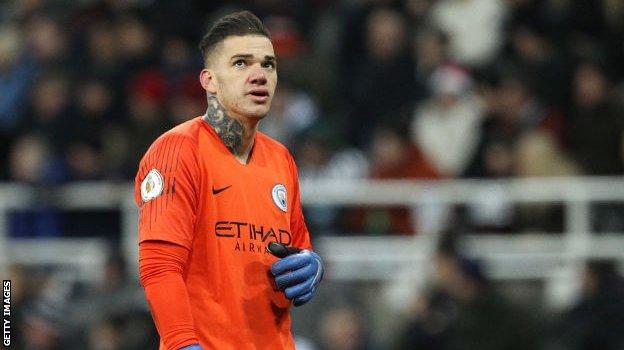 I thought about selecting Alisson in my team for his superbly taken headed goal against West Brom that practically saved Liverpool’s entire season.

Then there was Kasper Schmeichel, who produced the most amazing FA Cup final performance. Both keepers have, in their own special way, done something quite extraordinary.

However, nothing compares to winning a Premier League title – a fact both Alisson and Schmeichel will no doubt acknowledge – which is why Ederson gets my selection.

The Manchester City keeper has also kept the highest number of clean sheets, which means he wins this season’s Golden Glove award.

Did you know? Ederson kept 19 clean sheets in the Premier League this season, three more than any other goalkeeper. 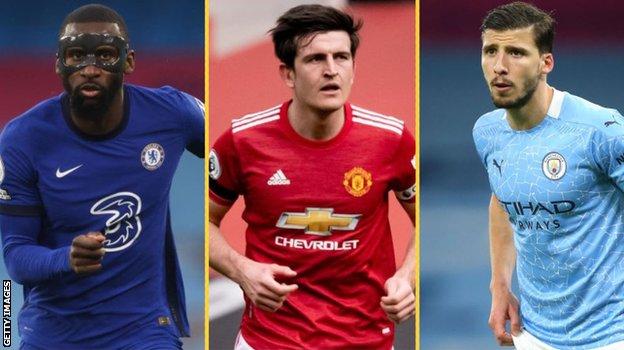 Rudiger: His game might not be pretty, but it’s extremely effective. Rudiger played in the FA Cup final and has seen Chelsea into the Champions League final as part of a team he didn’t feature in at the start of the season.

The Germany international had fallen out of favour with previous manager Frank Lampard, and Chelsea’s defensive performances suffered as a consequence.

Since the arrival of Thomas Tuchel, Chelsea and Rudiger haven’t looked back. A record number of consecutive clean sheets for the Blues not only exposed Lampard’s inexperience but highlighted Tuchel’s astuteness. Rudiger is the best defender in the club and a fearsome competitor.

Maguire: He may not be the best player in the club but there is no-one more committed to the cause than Maguire.

The Manchester United captain had played in every Premier League fixture until he injured his ankle against Aston Villa two weeks ago. The defender, along with Bruno Fernandes and Marcus Rashford, saw United through some very difficult moments during the early part of the season.

Maguire is a tough cookie. You don’t play for United and England unless you’ve got something to offer.

Did you know? Maguire made more clearances (122) and won more aerial duels (135) than any other United player in the Premier League this season.

Dias: It’s taken a while for Manchester City to find a player to fill the boots of Vincent Kompany, but winning a Premier League title in his first season suggests Dias has managed it.

The Portuguese defender has been quite magnificent this season.

There have also been some other notable centre-back performances, though. Tyrone Mings cut an influential figure in Aston Villa’s clean-sheet gang, Burnley’s Ben Mee forged an amazing partnership with James Tarkowski, and Liverpool’s Fabinho, who filled in gallantly for Virgil van Dijk during his long-term injury, was quite brilliant on occasions. 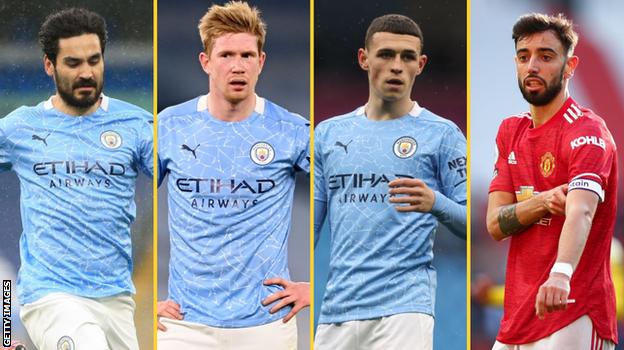 Gundogan: There were moments this season when we saw performances from Germany midfielder Gundogan that were quite phenomenal.

They were mostly when Kevin de Bruyne was unavailable for selection, which must have been very frustrating for the top teams who thought the absence of the Belgium international would be to their advantage.

Well, that couldn’t have been further from the truth. The level of performance from Gundogan and the quality of the goals were quite spectacular. It was the sort of purple patch you don’t see very often and was absolutely wonderful to watch.

Did you know? Gundogan has scored more goals in all competitions than any other City player this season (17).

De Bruyne: De Bruyne must be the best player in the world at the moment. If he wins the Champions League, I will put a pound to a penny he wins the Ballon d’Or, which rather tells its own story.

Personally, I think he should win the coveted award whether he wins the Champions League or not.

Foden: What a season Foden has had. I was torn between Chelsea’s Mason Mount and the Manchester City man.

Both have had exceptional seasons and are preparing for the Champions League final. Neither individual appears afraid of the big occasion, in fact the bigger the occasion the more they seem to enjoy it.

Foden may have made my team but I can’t predict who is going to win the Champions League final. Whatever the outcome, these two young men will have a say in the matter.

Did you know? Foden has had a direct hand in 26 goals for City in all competitions this season (16 goals and 10 assists), the second most of any City player after De Bruyne (28).

United were going nowhere before he arrived and the pressure was mounting. Within a few games it was clear the Portugal international was starting to have a profound effect on the team’s performances.

United fans had not only taken to him, but he to them. Fernandes was made for Old Trafford and he seems to have the ability to get the best out of others without it affecting his own game.

Did you know? Fernandes has been directly involved in more goals in all competitions this season (46) than any other United player (28 goals, 18 assists). 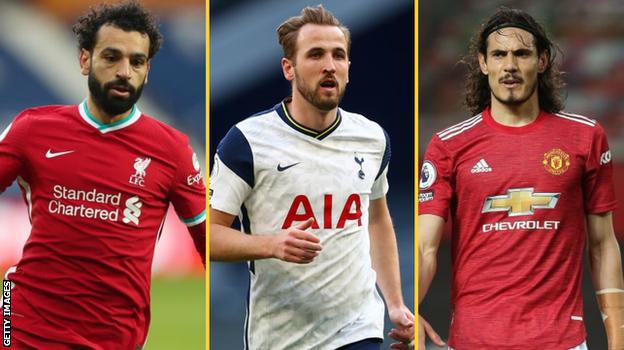 Salah: Well he missed out on the coveted Golden Boot, but frankly who cares? Champions League football was a must for Salah and for Liverpool.

I’ve said repeatedly that Salah’s selfishness has had an effect on his team-mates, and none more so than Sadio Mane. The Senegal striker works tirelessly for the team and shares his opportunities. Salah tends to carve chances out for himself and clearly feels he has earned them.

Regardless, Salah finished the season against Crystal Palace brilliantly with the sort of team performance that graced his game when he first arrived at Anfield.

Did you know? Salah became the first Liverpool player to score at least 20 goals in three different Premier League campaigns.

Kane: Whether he stays or goes, Kane has had another brilliant season in front of goal. No Champions League place or a trophy for Spurs, so the Golden Boot will just have to do.

It’s been another difficult season at Spurs. If Kane does decide to leave, we wish him well – but if he decides to stay then he deserves a top-class manager and a top-class team. It cannot be right that each time he joins the England camp the captain has fewer medals than Leicester’s James Maddison.

Did you know? Kane won the Premier League Golden Boot for a third season (also 2015-16 and 2016-17), becoming only the third player to win the award as many as three times, after Thierry Henry (four) and Alan Shearer (three).

Cavani: What an impact Cavani has had on the Manchester United forward line. Just as Marcus Rashford was starting to run out of steam, and Mason Greenwood was coming off the boil, in came Cavani and rejuvenated them both.

The Uruguayan has been immense for Rashford and Greenwood, and slotted into the United set-up effortlessly. Getting 34-year-old Cavani to commit to another season at United is a major achievement. Let’s hope he doesn’t run out of steam.

Did you know? Cavani became only the third United player to reach 10 or more goals in a single Premier League season while aged 33 or over at the start of that campaign, after Teddy Sheringham in 2000-01 and Zlatan Ibrahimovic in 2016-17.

I thought it was a wonderful tribute given to Roy Hodgson on his last game in charge at Selhurst Park. Both sets of players from Crystal Palace and Arsenal formed a guard of honour for a man who has spent his life in football.

I remember him as a rookie coach learning his trade in Sweden. Every time I seemed to play a match anywhere in the world he seemed to be there either watching or having post-match discussions with managers and coaches.

Hodgson has, of course, managed in more countries than I care to mention and speaks as many languages. However what I admire about him most is the way he has conducted himself throughout his career. His standing in the game is second to none and comparable to those who have won far more.

As a young boy I briefly met the great Manchester City manager Joe Mercer and was struck by his presence. Mercer was dignified with an air of sophistication, as was Fulham’s Alec Stock and Arsenal’s Bertie Mee.

These men carried the traditions and values of the game around with them like they were precious jewels. Tottenham’s Bill Nicholson and Celtic’s Jock Stein were revered by players and fans alike, and Hodgson finds himself in a very similar category.

This is an era that is in danger of losing its soul if something is not done about this incessant diving from prima donnas, who fall down at the touch of an eyelash, and vast sums of money dished out to some players who can barely trap a ball.

Somehow, Hodgson has remained above the game’s excesses. I don’t know what he intends to do with the rest of his life but the Football Association could do much worse than invite him to take its chairmanship for a period of time – it could do with a leader.

He could even consider going on a lecture tour to teach managers how to conduct themselves and dress appropriately on the touchline. A knighthood wouldn’t be out of the question, either.

Face masks do NOT protect the wearer from coronavirus, Danish study finds

'We got bored and wanted to go on a trip': Tales from a pandemic spring break in Cancun, Mexico

The Royal family have released a sweet snap of the Queen alongside King George VI, Prince...