Get lost in Bermuda on this virtual tour 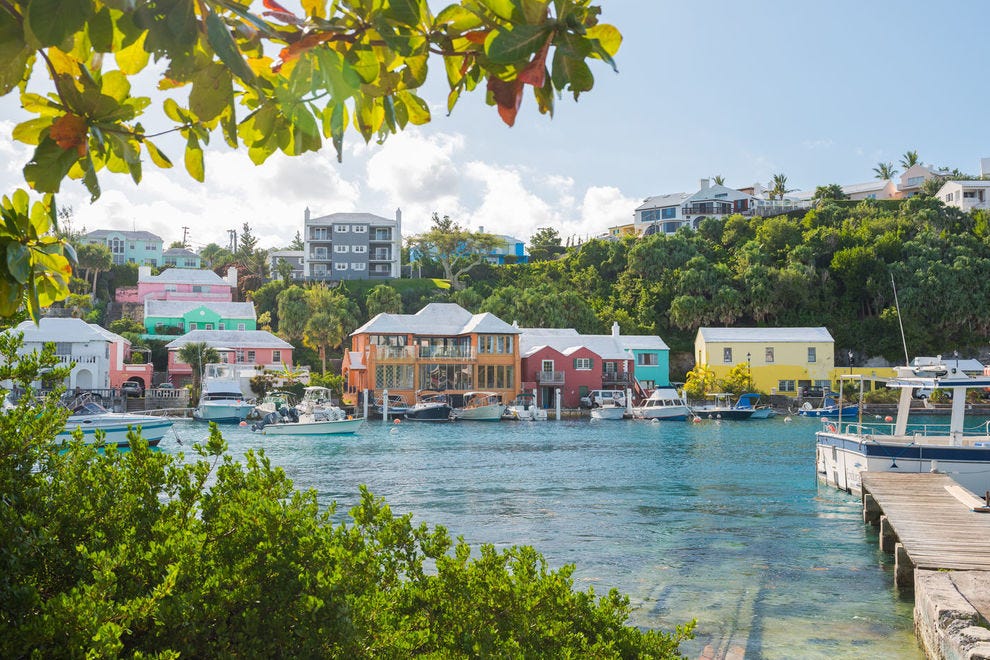 Just two hours by plane from the east coast of the U.S., Bermuda feels more like a slice of rural England with a tropical twist. The colonial architecture and rich heritage join forces with pink sand beaches and some of the best diving on the planet to make Bermuda an appealing destination for all sorts of travelers. 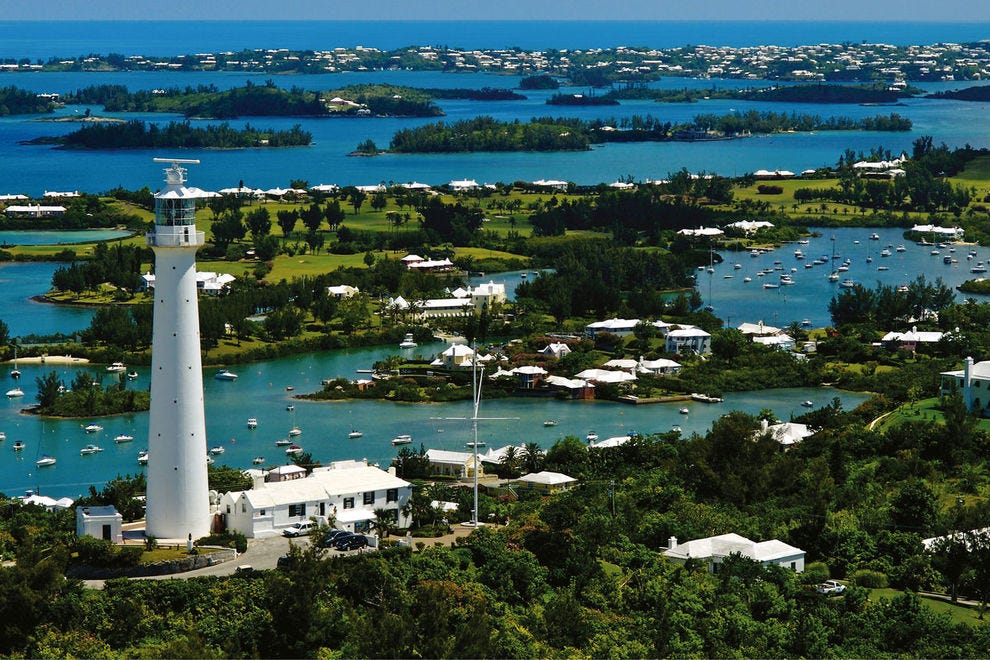 For one of the best views on the island of Bermuda, climb the 185 spiral steps to the top of Gibbs Hill Lighthouse. The 117-foot structure, built in 1846, ranks among the oldest cast iron lighthouses in the world. 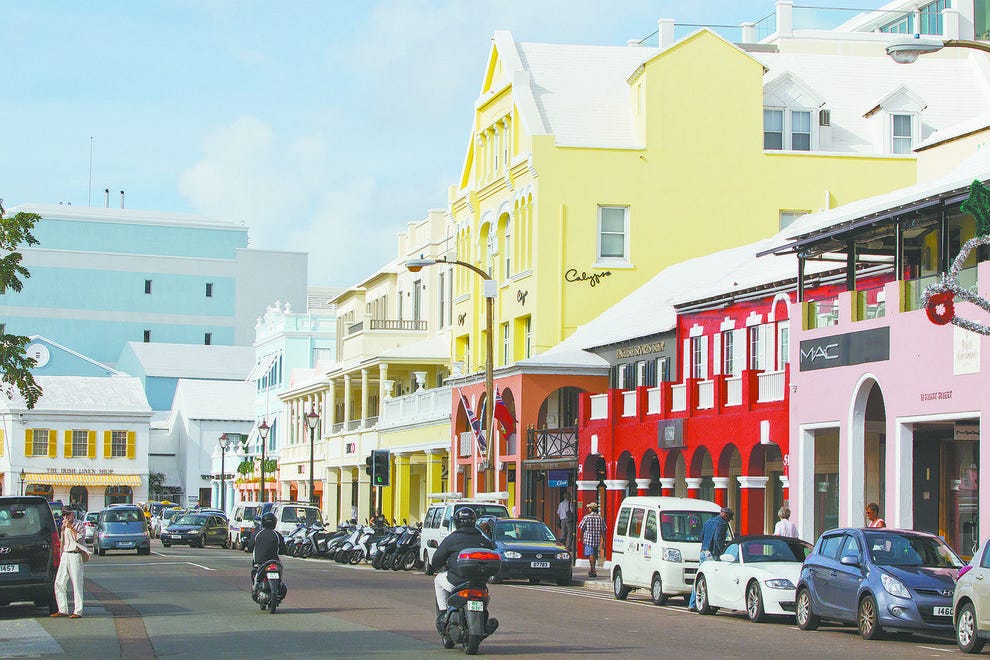 Hamilton, Bermuda’s capital city, is a colorful, walkable and welcoming place to learn more about the island’s history and heritage. Art lovers shouldn’t miss the Bermuda Society of Arts and the Bermuda National Gallery, while shoppers will find plenty of boutiques in the pastel-painted buildings on Front Street (pictured). 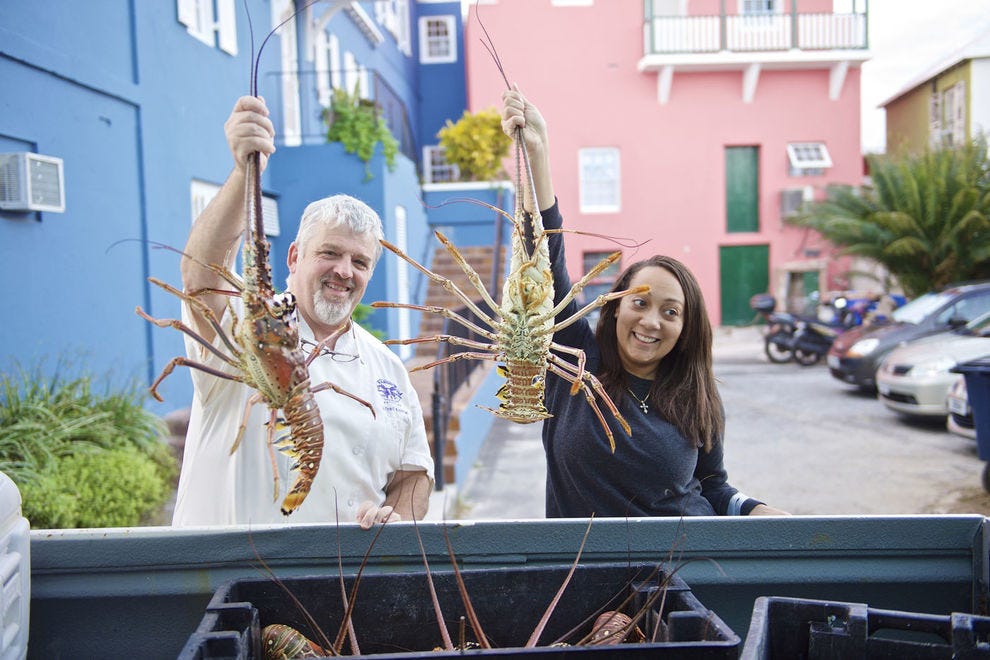 A feast from the sea 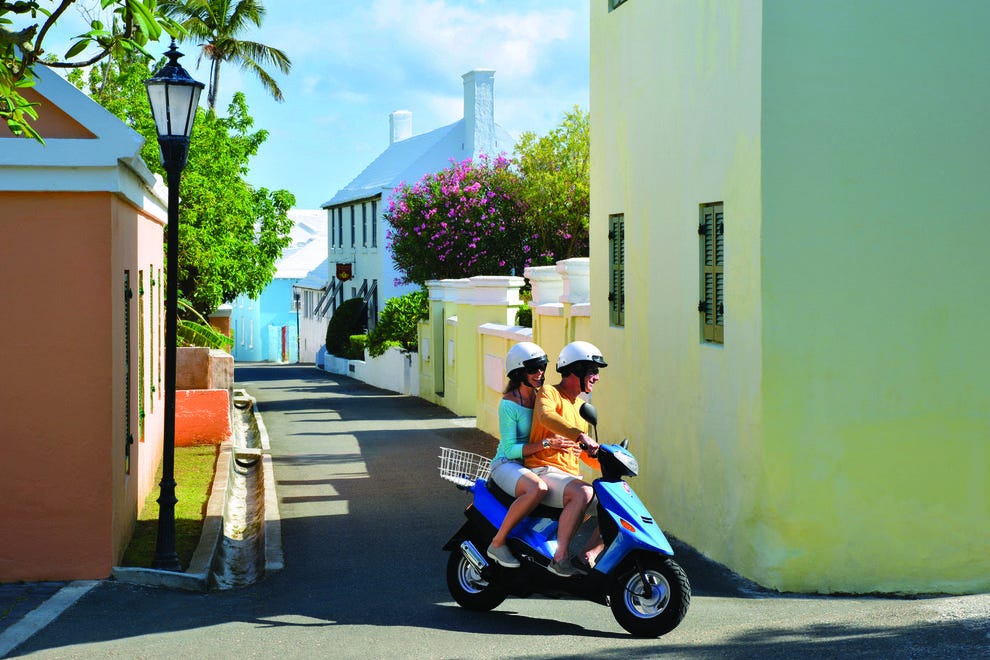 Bermuda is well-known for its pastel-hued colonial architecture. Head to St. George’s, a UNESCO World Heritage site on the island’s East End to see some of the best examples.

The former capital ranks as the oldest English settlement in the New World and is home to the Bermudian Heritage Museum, Bermuda National Trust Museum and the St. George’s Historical Society Museum. 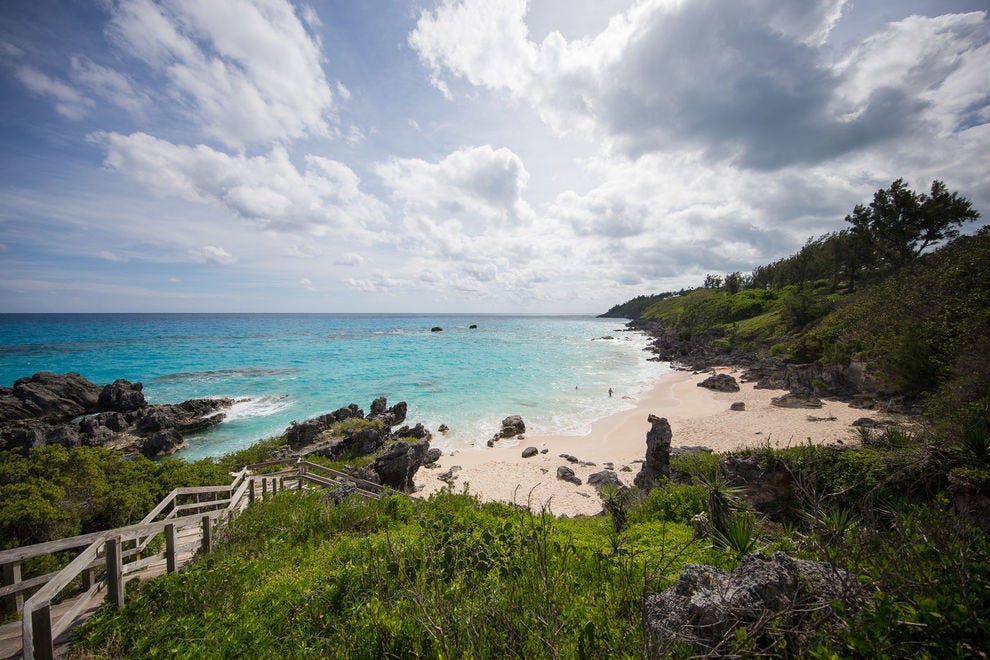 Day at the beach

The Bermuda coastline boasts numerous stretches of pink sand punctuated by rock formations and hidden coves. A reef close to the shore of Church Bay (pictured) makes the beach a favorite for swimming and snorkeling. 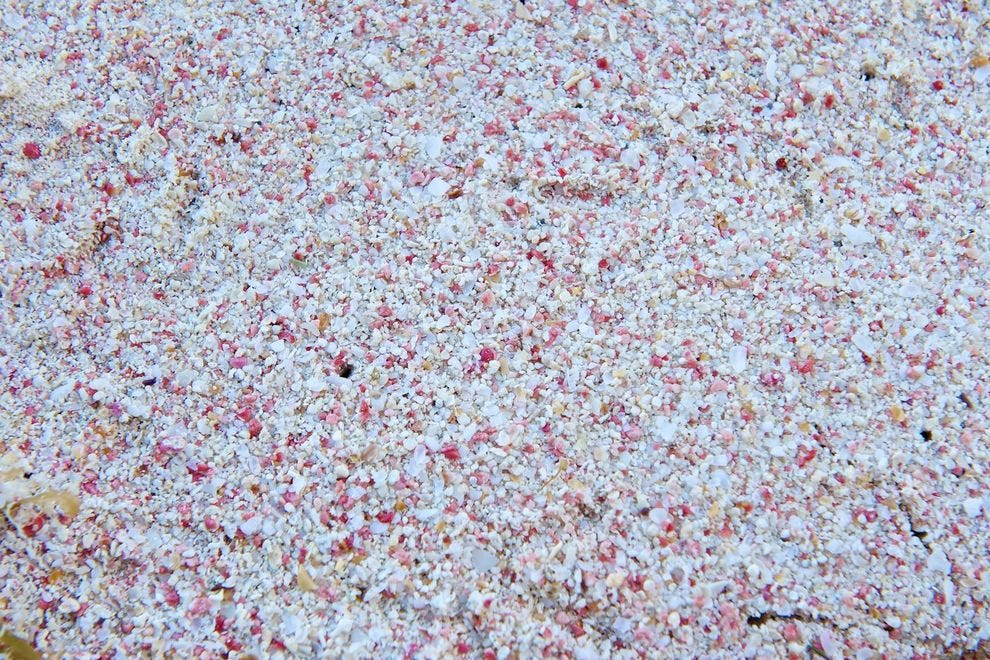 The distinctive pale pink sand of Bermuda’s beaches gets its color from red foraminifera, a single-celled organism that lives in a calcium carbonate seashell. When they die, these tiny shells wash ashore and mix with the white sand, giving the beaches a pink shade. 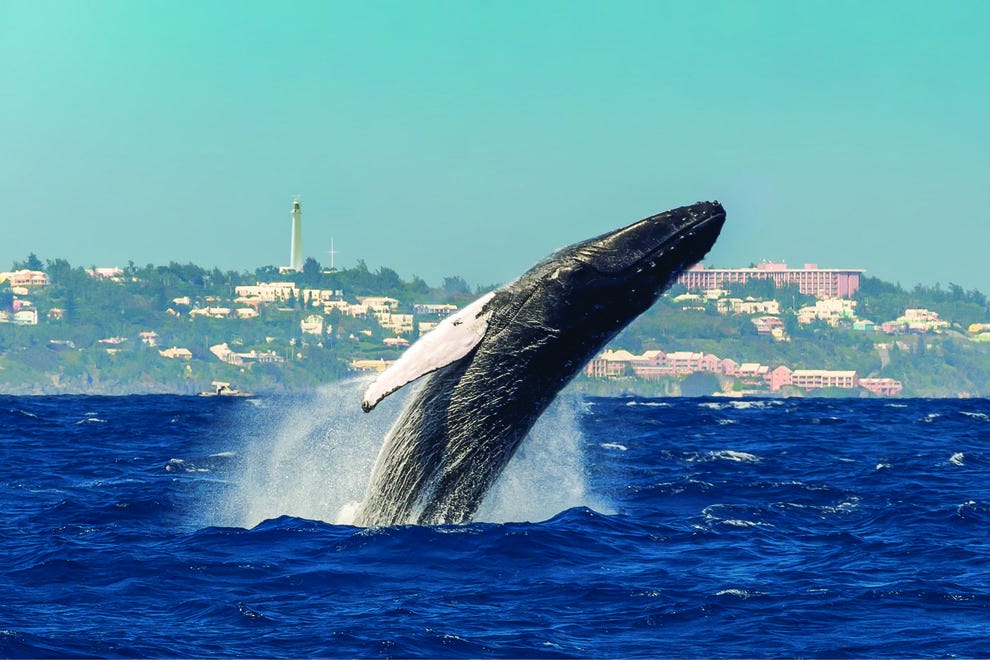 Bermuda welcomes some special visitors each year during March and April. During this season, migrating humpback whales pass through these waters on their way to their summer feeding waters in Iceland, Greenland and Canada. 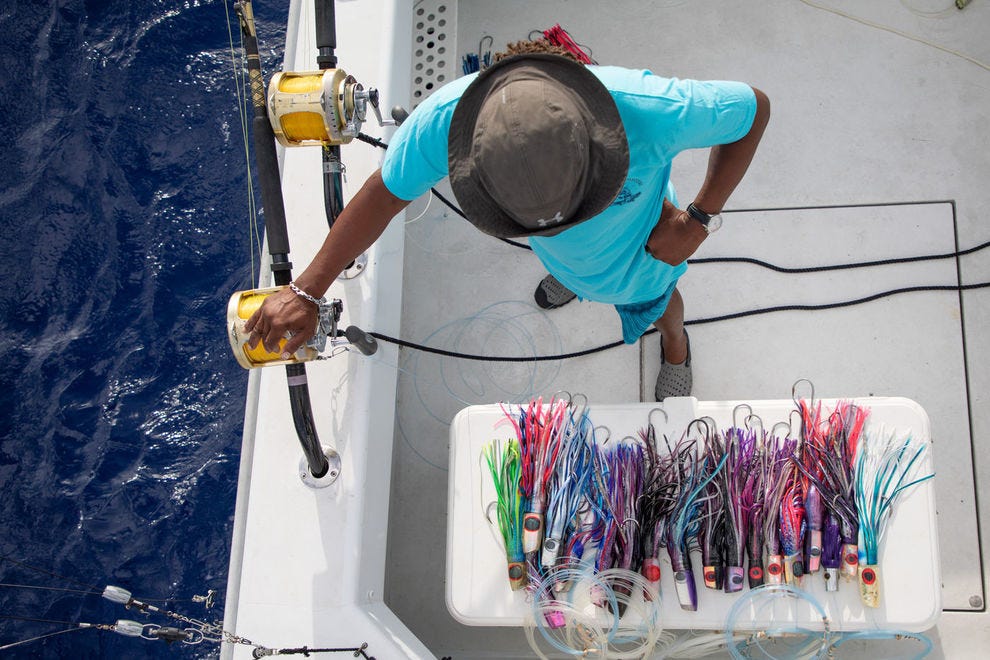 Catch of the day

If you look at Bermuda on a map, you’ll notice it’s shaped like a fish hook. Sport fishers come to take advantage of some of the best deep-sea fishing in the Atlantic, where it’s possible to catch marlin, tuna and wahoo just offshore. 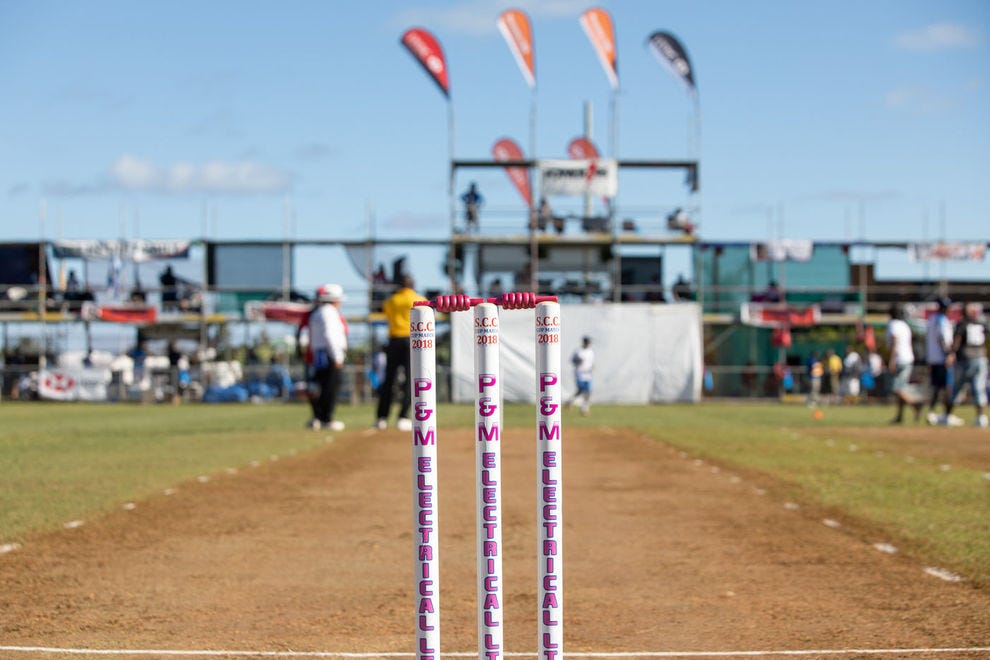 Cricket, the national sport of Bermuda

Cricket is a big deal on Bermuda – it’s the national sport after all. The Cup Match, perhaps the island’s biggest event of the year, centers on the match between island rivals St. George’s and Somerset. The first day of the two-day event falls on Emancipation Day, celebrating the abolition of slavery in Bermuda in 1834. 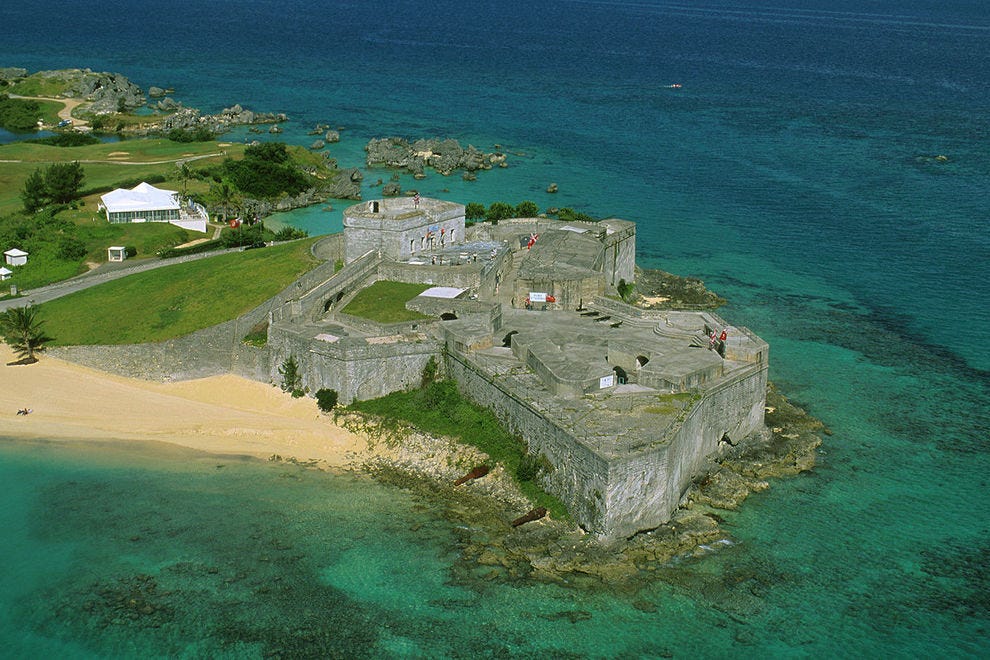 For many years, Bermuda served as a military outpost for Great Britain, of particular strategic importance during the American Revolutionary War and War of 1812. Several naval and military strongholds remain.

The largest, Fort St. Catherine, was built in 1614. Today, it offers spectacular ocean views and a history museum outlining life on the island during the 17th century. 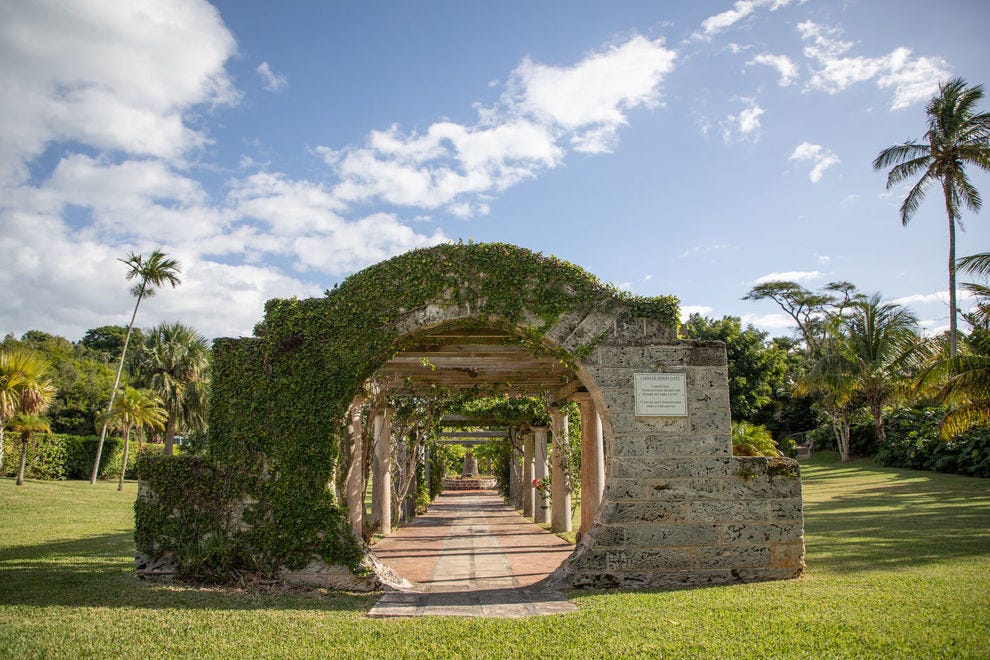 The moongate has become a national symbol of Bermuda, though the roots of this architectural feature come from China. The trend started when a sea captain coming back from a visit to China in 1860 decided to build the island’s first moongate.

Typically made from local limestone, these days, you’ll see these round openings at hotels, homes, gardens and public parks. According to local legend, newlyweds who step through a moongate hand in hand will enjoy enduring happiness. 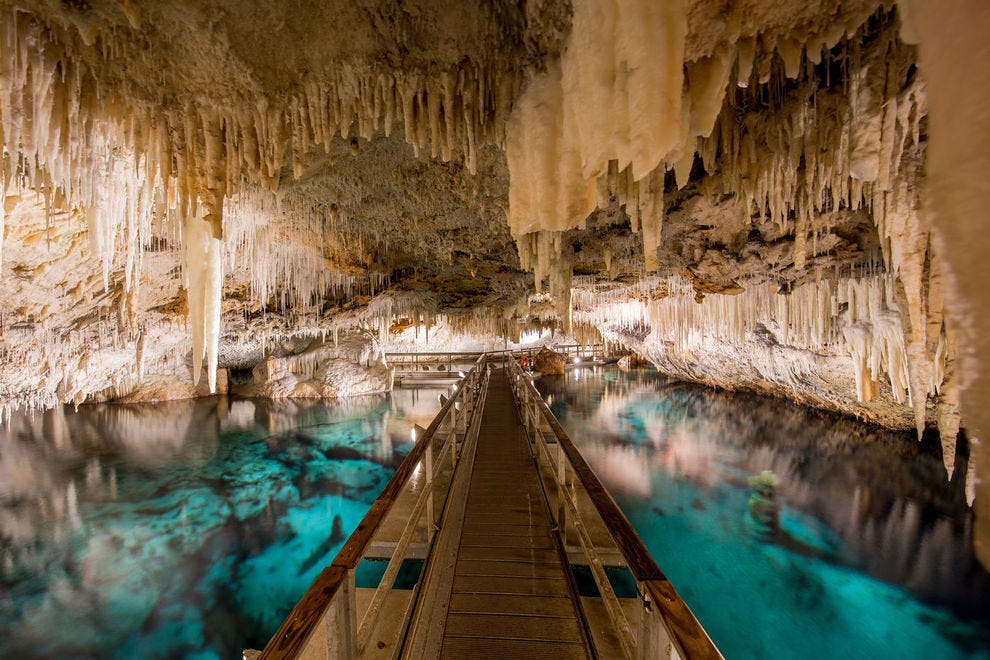 Some of Bermuda’s most spectacular natural attractions lie underground in cave systems thought to be millions of years old. Among the most impressive are the Crystal Caves which have inspired Mark Twain and “Fraggle Rock” co-creator Michael Frith. 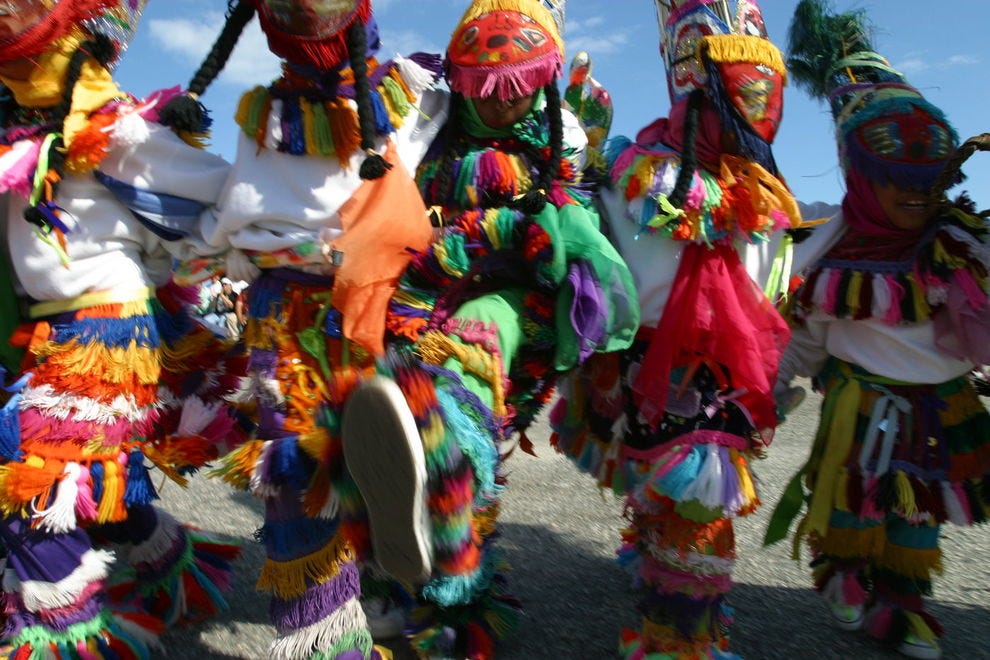 During many festivities on the island (particularly Boxing Day), troupes of dancers in colorful costumes take to the streets. This tradition of Gombey dancing dates back to the early 1800s, with roots in African, Caribbean, Native American and British cultures.

The elaborate costumes typically feature a feather headdress made from peacock feathers, a painted mask, bells, tassels, capes and tiny mirrors that reflect the sun. 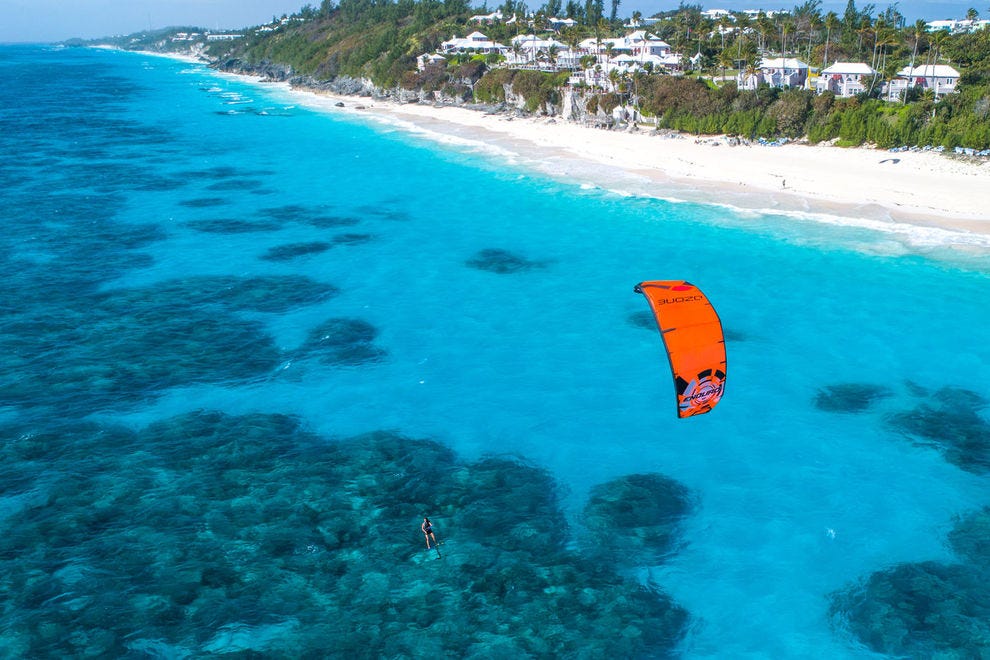 Come winter, steady winds attract kiteboarders to Bermuda’s shores. Island conditions provide plenty of challenge for experienced kiters, but it’s also an excellent spot to take a lesson and learn how to ride for yourself. 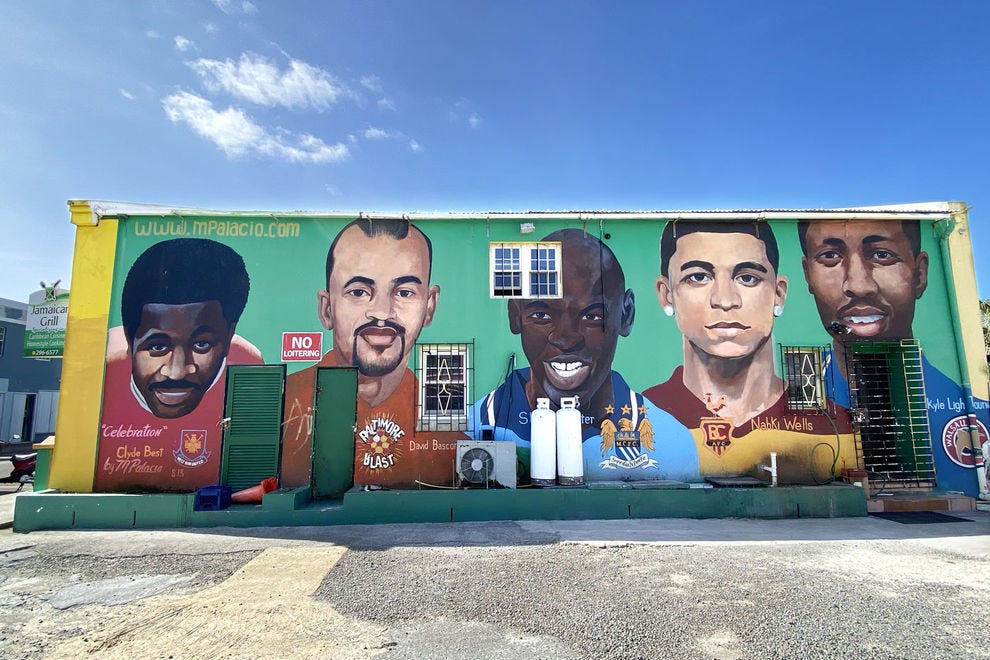 Bermuda may be famous for its pastel-colored buildings, but it’s increasingly popular for its equally colorful street murals. Take a stroll through the streets of Hamilton to see some of these works of art inspired by island life. 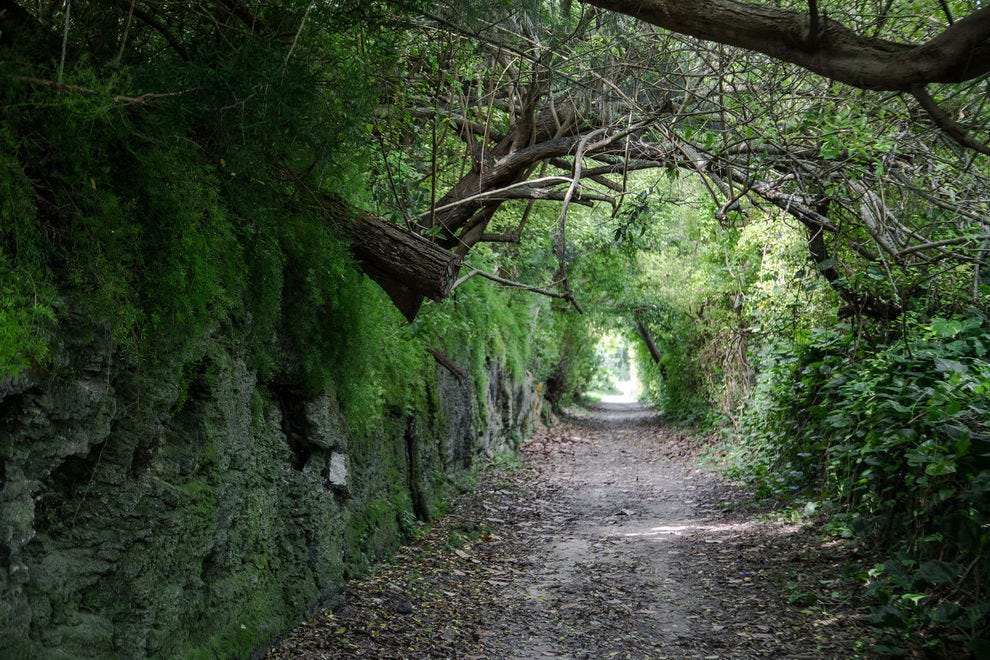 One of the best ways to explore Bermuda is by hiking or biking the 18-mile Railway Trail. This scenic path traces an abandoned rail bed (the train was operational from 1931 to 1948) from one end of the island to the other. 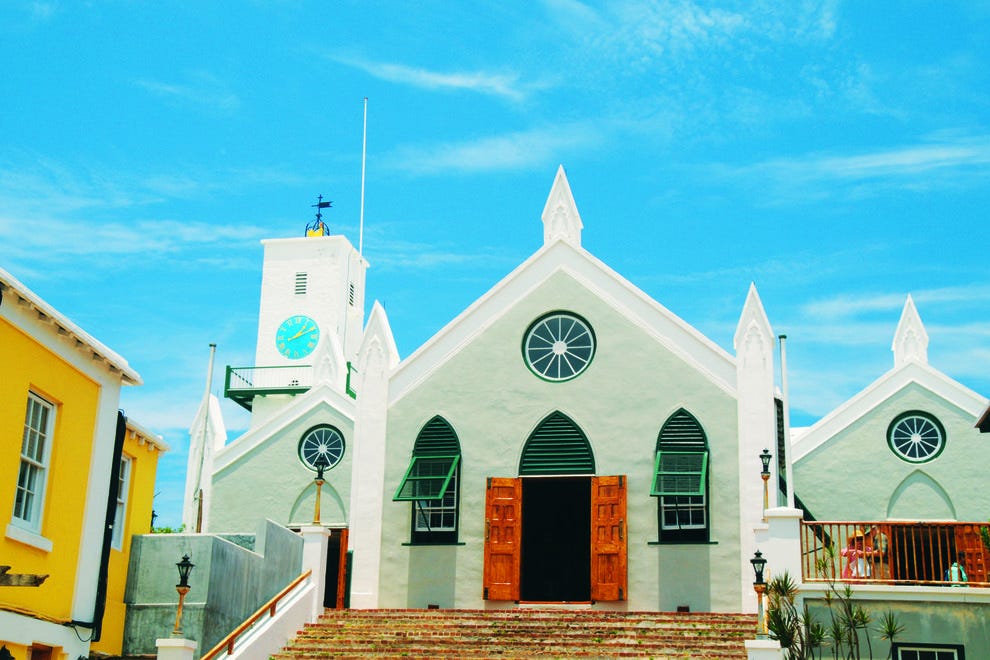 In St. George’s, you’ll find the oldest continuously used Anglican church outside the British Isles. Originally built in 1612, St. Peter’s, Their Majesties Chappell still has its original altar, as well as 17th-century communion silver and an 18th-century throne taken from a shipwreck. 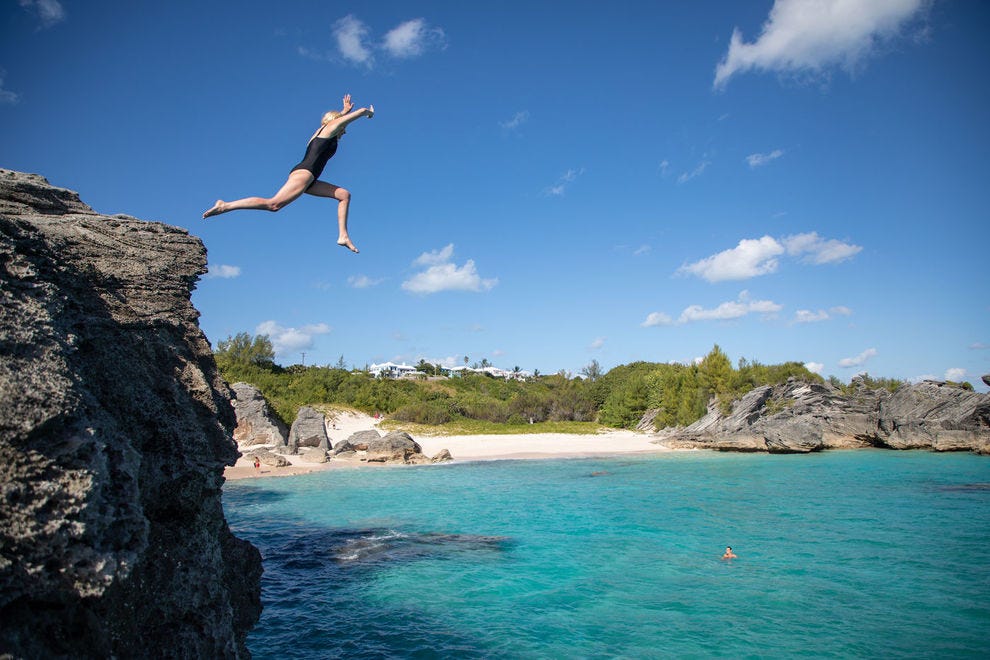 Large rock formations jutting up from the water make Bermuda a popular spot for cliff jumping. Pictured here is Stonehole Bay, a small beach on the South Shore. Before you embark on this adrenaline rush, be sure to ask around to find the safest spots and check the area for depth and tide timing.  You’re jumping at your own risk. 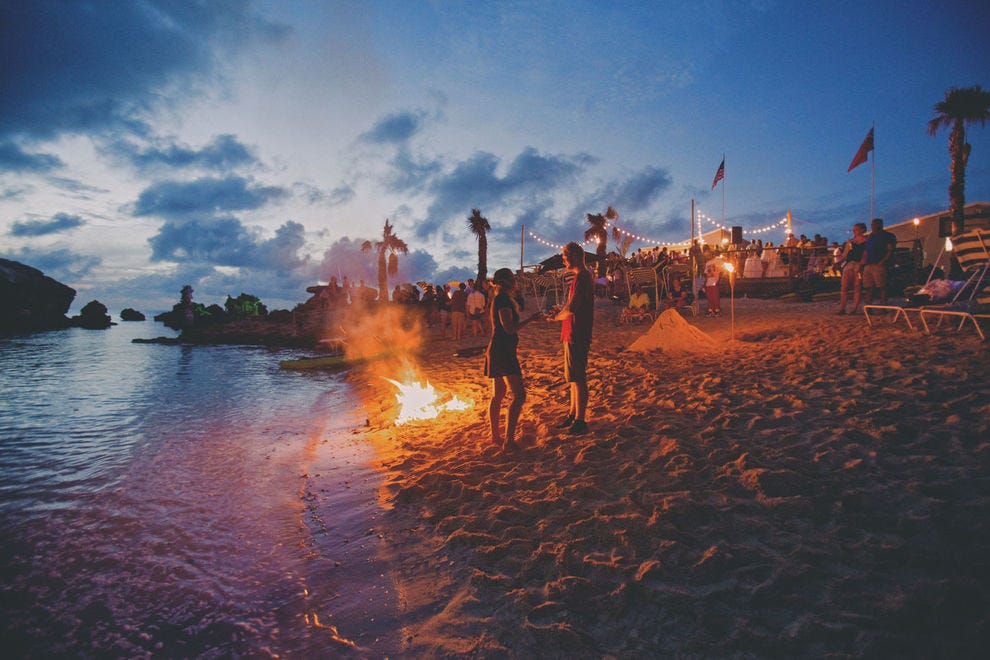 Tobacco Bay Beach got its name from the wild tobacco found growing by the castaways of the Sea Venture wreck in 1609. While you won’t find tobacco these days, you will find one of Bermuda’s most popular beaches. On summer evenings, the beach hosts a bonfire and beach party lasting well into the night.