Great gesture by Lewandowski during Poland vs England match 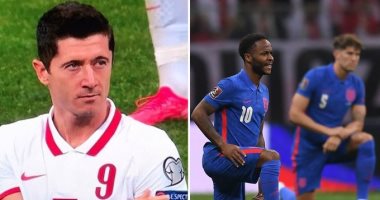 In a wonderful gesture, the Polish star Robert Lewandowski, the Bayern Munich striker, called on the fans of his country to respect the kneeling movement that England players always do before matches, to combat racism.

The Polish national team managed to achieve a 1-1 draw with its guest England, in the match that brought the two teams together, on Wednesday evening, at the “Slaskie International Stadium”, as part of the sixth round of Group I in the European qualifiers for the 2022 World Cup.

Before the match, the players decided to make a movement against racism, but the fans of the Polish national team booed, and Lewandowski did not even mention the word Respect The symbol on his Polish shirt, which means respect, is to urge his country’s fans to respect the feelings of others.

And the newspaper “Sun” praised what Lewandowski did, as it considered it a strong message from him, after the Three Lions were forced to deal with boos after a knee movement for the second time in less than a week, as Gareth Southgate’s team was mocked six days ago in Hungary during a performance The anti-racism gesture.

England discussed the issue in preparation for their clash with Hungary after the Republic of Ireland players loudly booed in June when making a knee move before a friendly match.

With this result, the England team maintains the lead in Group I with 16 points, while the Polish team slipped to third place with 11 points, one point behind the runner-up Albania.

Florida judge rules in favor of mask-wearing mandates in schools