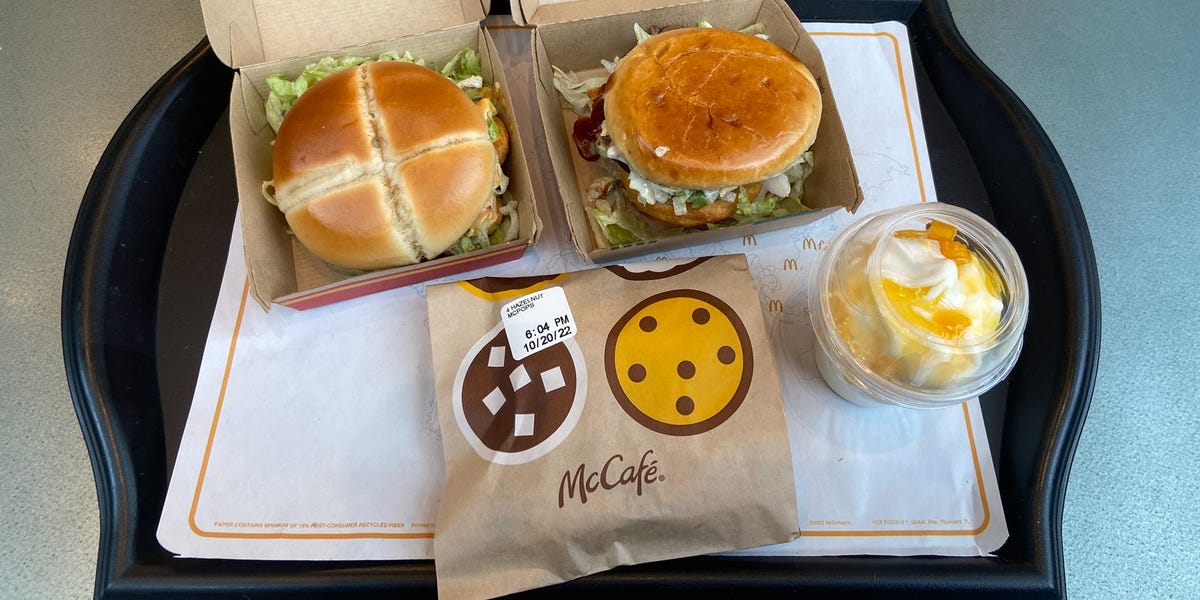 McDonald's first opened its hugely popular Global Menu Restaurant in 2018. It's located on the lower level of the company's global headquarters in Chicago's West Loop neighborhood.

"As part of our new headquarters, we wanted to provide our customers with an exciting way to experience our global menu right here in Chicago," Steve Easterbrook, then-McDonald's president and CEO said in 2018. "We are delighted to showcase a taste of McDonald's from all over the world making this location a one-of-a-kind experience that Chicagoans will enjoy with friends and family."

In recent years, the restaurant has become the subject of several viral TikTok videos, depicting the restaurant's unique and international fare.
I relocated from Brooklyn to Chicago earlier this year, so I decided to check it out for myself. As I approached, I saw the restaurant is positioned next to Hamburger University, a training facility for high-performing managers, middle managers, and owner-operators.

The program, which has multiple global campuses, is for high-performers and notoriously difficult to get into. Its Shanghai campus is known to accept just 1% of applicants, Bloomberg previously reported.

Upon entering, I could already tell this was no ordinary McDonald's restaurant.
The space is sprawling, at 6,000-square-feet, with a modern, chic design.
I was immediately greeted with a warm welcome from a crew of friendly, sharply dressed staff members. They directed me to the menu, which denotes global offerings with an image of the flag the item hails from.
There is also a separate handout to take a closer look at current global menu items. The restaurant features a rotating menu of offerings from McDonald's locations around the world.
Near the register, there was a display case of pastries that immediately piqued my interest, featuring the classic apple pie, but also goodies I hadn't seen before at American McDonald's.
I also spotted a designated pick-up area for McDonald's employees. The Chicago corporate HQ employs about 2,000 people.

Unfortunately, a couple global menu items weren't available when I visited — including the Benedict Bagel from New Zealand, and the mini donuts and mini apple fritters from Canada — but I ordered every global item I could.
I arrived just before the lunch rush, so thankfully there was ample seating, though the restaurant quickly filled up during my time there. After ordering, I was given a number and instructed to sit down and wait for a staffer to deliver my food — I definitely wasn't in a traditional McDonald's anymore.
My food arrived about five minutes later on a big tray, ready for me to dive in.
I popped open the lids to get a glimpse and survey the spread before deciding where to start.
I started with the mango sundae from Malaysia, $2.59, before it melted, and because sometimes it's fun to have dessert first.
I've long been a fan of McDonald's hot fudge sundae in the US, as well as the famous vanilla soft serve, so this was a pleasant surprise. The mango topping reminded me a bit of the fruit that comes with a Fage yogurt cup, so that made this feel a bit like I was enjoying a frozen yogurt.
Next up, it was time to try my two sandwiches.
I started with the Kung Pao Double Crispy Chicken sandwich, $5.99, from China.
The sandwich includes two crispy McChicken patties, shredded lettuce, and Kung Pao dressing on a cross bun.
This was delicious, with a nice blend of flavors that complemented the crispy chicken.
After a few bites, I put the Kung Pao on pause to test the Aussie Angus Burger from, you guessed it, Australia, $6.99.

The Aussie Angus Burger is massively popular in Australia and was just brought back for a limited time.

This one was immediately overwhelming, and so large and messy I could barely pick it up.
It includes 100% Aussie beef, garlic mayo, shredded lettuce, a beet root slice, onion rings, Monterey jack cheese, and rasher of bacon on an artisan roll.
I wanted to like this more, given the hype (and the fact that it has beets AND onion rings on it!) but there was just too much going on for me.
At one point, I had to shamefully ask for utensils so I could eat it…
Last but not least was the moment I was most excited for: the Chocolate Hazelnut McPops from Spain, $3.99.
These were great — you can't really go wrong with doughnuts filled with chocolate hazelnut spread and covered in powdered sugar.
I went with chocolate hazelnut, but there is also an option with white chocolate cream. They paired very nicely with my latte (nothing special or global about the coffee, but still tasty.)
At that point I was very full and ready to call it a day. The Kung Pao Crispy Chicken sandwich and McPops were by far my favorite, and I would definitely recommend a visit.
Read the original article on Business Insider
Share30Tweet19Share
Previous Post