For a teenager, it was an unexpected and shocking diagnosis: blood tests and an ultrasound confirmed that, at 13, Hayley Cockman had gone into premature menopause.

Her periods had stopped within a year of starting, and then symptoms such as night sweats, hot flushes and poor concentration kicked in.

‘At school, I’d be sitting in class, having a hot flush and thinking, ‘What’s going on?’ I didn’t have a clue,’ says Hayley. 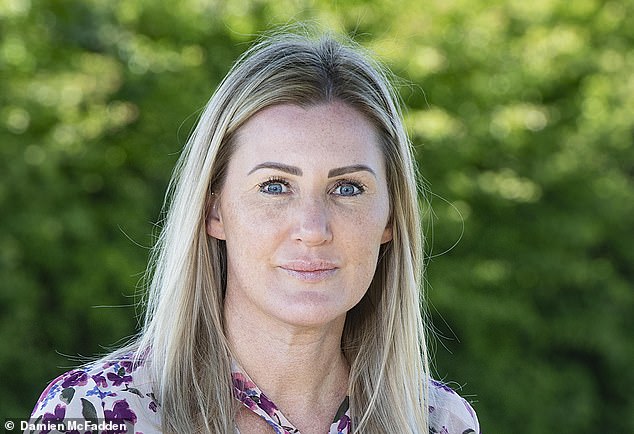 For a teenager, it was an unexpected and shocking diagnosis: blood tests and an ultrasound confirmed that, at 13, Hayley Cockman had gone into premature menopause

‘Mum hadn’t been through menopause herself so she didn’t put two and two together. The last thing you’d ever expect is for your 13-year-old daughter to go through the menopause before you.’

Hayley’s mother, Julie, took her to the doctor, and after tests, Hayley was put on HRT.

Going through the menopause so young haunted her for years — even when chatting with friends, she often felt ashamed and embarrassed to talk about it.

Now 40, Hayley, who lives in Essex with husband Gavin, 33, a builder, has only recently come to terms with her condition and the fact her best hope of starting a family is to adopt.

When she was first diagnosed, she didn’t really appreciate the impact it would have on both her long-term health and her ability to have a family. 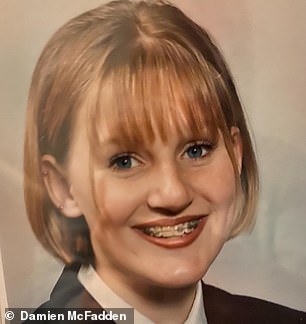 Going through the menopause so young haunted her for years — even when chatting with friends, she often felt ashamed and embarrassed to talk about it. Hayley is pictured above age 13

‘It was only when I got older and my friends were having babies that I started to grieve for the loss of my fertility,’ she says.

‘It was a kick in the heart every time someone told me they were pregnant. You want to be happy for your friends, but at the same time you can’t help feeling envious and jealous and thinking: ‘It’s not fair. Why has this happened to me?’ ‘

Although women usually go through the menopause — defined as not having a period for at least a year — aged 51, a surprisingly high number experience it prematurely, aged 40 and under.

The menopause occurs when the ovaries stop releasing eggs each month. And because the follicle — the sac in the ovary where the immature egg develops — also produces oestrogen, levels of this hormone drop significantly, too.

Normally, the ovaries stop egg production as part of the ageing process (women are born with an entire reserve of immature eggs) or because they have been damaged or removed.

Hayley is now regional co-ordinator for the Essex branch of the Daisy Network, a charity for women going through early menopause, and has set up an Instagram page, @prematuremenopause14, which has nearly 4,000 followers

‘In youngsters, it would be unusual for there not to be an underlying cause, whether a medical condition that affects the functioning of the ovaries, an underlying genetic chromosome disorder or cancer treatment,’ says Dr Currie.

‘However, for a small minority there is no obvious cause, which can make it harder to deal with.’

‘This causes underdeveloped ovaries. Those affected might have few eggs or none at all, so they might never have periods or stop them early,’ she explains.

Scans revealed Hayley had only one ovary and a small womb — but the exact cause has not been found. She believes it may be genetic, as gynaecological issues run in her family. The menopause means an end to natural fertility, but it can have further ramifications, as oestrogen also keeps bones healthy, and has a protective effect on the heart, skin and blood vessels.

Yet when Hayley was told she was menopausal, she was given no useful advice about the repercussions, and simply handed a packet of HRT, ‘to protect my bones against osteoporosis and I was told it would give me a ‘withdrawal bleed’ every month’.

This, she was told, would maintain the lining of her womb in preparation for fertility treatment. She had been advised her only chance of having a baby was through donor eggs and IVF.

‘But I didn’t understand this or any of the other consequences,’ she says. ‘I didn’t realise that it meant I would struggle to have a family, that my bones could crumble and I could have heart problems [because of the loss of cardio-protective oestrogen].’

There is no ‘cure’ for premature menopause, says Dr Currie. ‘All you can do is manage and prevent the effects of low oestrogen — such as hot flushes, night sweats and mood swings — as well as the long-term consequences of early menopause, such as an increased risk of osteoporosis and cardiovascular disease.’

The best way to combat this is to go on HRT.

Dr Currie adds that for young women, ‘a combination contraceptive pill can also be considered. It will increase their levels of oestrogen without making them feel different from their peers.

‘There is an ongoing debate over which is better — you have to take things into account such as the need for contraception [HRT won’t stop conception].

‘If we’re unsure why the ovaries have stopped prematurely, there is a chance they could start again later. For some women, pregnancy would be a miracle; for others, a nightmare. It’s an individual discussion on their fertility and contraceptive needs.’

It was only when she reached her 20s that the loss of her fertility really hit her. ‘At first, I put it to the back of my mind and carried on life as a teenager,’ she says. ‘If my friends talked about having children, I would just go quiet.’

To help lift the lid on the issues that come with premature menopause, Hayley appears in a Channel 4 programme that will be broadcast tomorrow night.

Dr Currie says the menopause can have a ‘huge impact on young women’. ‘If you’re in your mid-50s, you may well have had a family, but for girls who dream of being mothers it can be devastating.’

Hayley used diet and exercise as a coping mechanism and admits that while she ‘wasn’t anorexic’, she went through a stage of losing ‘a lot of weight and passing out’.

She recalls: ‘I thought if I looked nice, people wouldn’t have a clue what was going on inside.’

But her mum told her she was worried she was taking things too far, so she ‘nipped it in the bud’.

It was only when Hayley met Gavin in 2011 that she began to come to terms with her diagnosis. The couple married in 2013 and are trying to adopt a child. Hayley ruled out IVF because ‘I was scared that if it didn’t work, I’d feel like a failure again’.

‘Gavin knew I couldn’t have children and was fine with that because his mum was adopted and his granddad was his idol and wasn’t a blood relative.’

Hayley is now regional co-ordinator for the Essex branch of the Daisy Network, a charity for women going through early menopause, and has set up an Instagram page, @prematuremenopause14, which has nearly 4,000 followers.

‘I’m not ashamed of myself any more,’ she says. ‘I want to turn something negative into something positive and raise awareness as much as I can.

‘I remember when I was growing up, a lady at work would say: ‘I’m going through my change. This will happen to you one day.’ And I’d sit there and think: ‘It already has. You haven’t got a clue.’ ‘

Davina McCall: Sex, Myths And The Menopause is on Channel 4 at 9pm tomorrow.

Everyday activities that boost your happiness hormones. This week: Have a massage

Oxytocin is a hormone that makes us feel bonded, ‘facilitating’ the release of two key brain chemicals, dopamine and serotonin, which both affect mood, says Paul Zak, a professor of economic sciences, psychology and management at Claremont Graduate University in California.

In one of his studies, published in the journal Alternative Therapies in 2012, Professor Zak found that just 15 minutes of massage caused oxytocin levels to rise by 17 per cent. Hugging and kissing also stimulate oxytocin production. But if these aren’t available to you — even after hugging is allowed in England from next week — Professor Zak suggests some technology that allows remote bonding.

‘A number of companies have products that can give people the sense of touch. They’re too new to have been tested to confirm that they cause oxytocin release, but I suspect they will,’ he says. One such product is Bond Touch, a wristband that ‘buzzes’ when one wearer touches it to let the other person know they’re thinking about them (£104 for two, uk.bond-touch.com).