The first 30 seconds are the worst. The cold bites, actually bites, causing your heart to beat so fast you can almost hear it, as you draw in your first rasping breath.

Every cell in your body screams ‘what the hell is the point of this torture? Why aren’t you at home, in your nice warm bed like the rest of the sane world?’ But there is also a small voice in your head whispering ‘this shall pass’.

For it does. You know that soon your skin will tingle and fizz with happiness and hours later you’ll feel like an all-conquering superhero. For the rest of the day — sometimes for days on end — every time you enter a room the Rocky theme tune plays in your head. 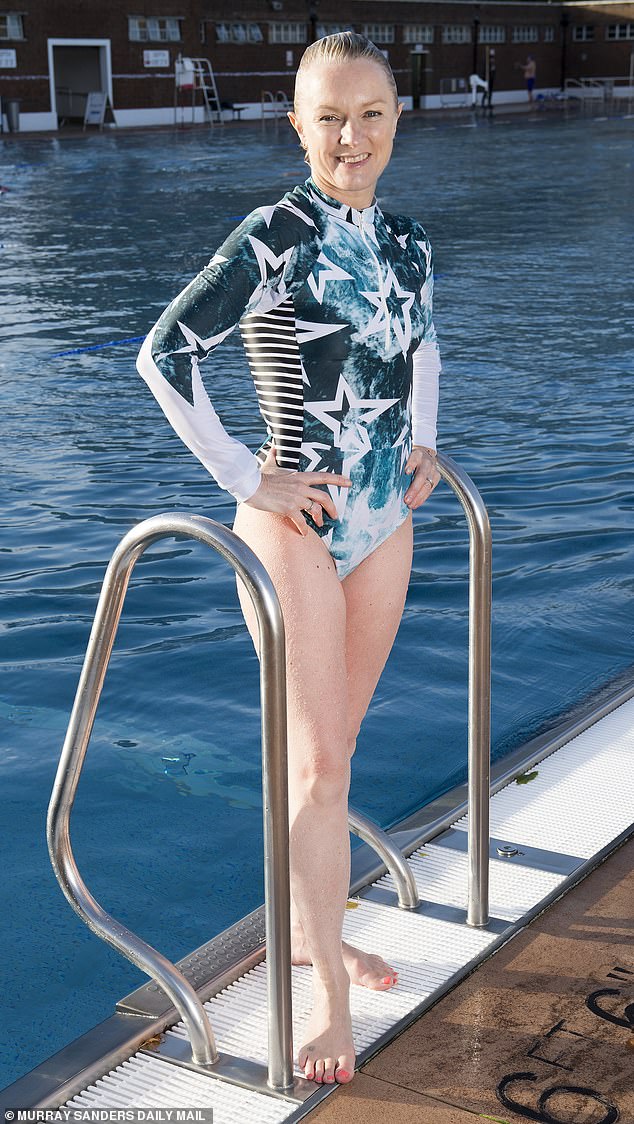 That’s how it goes with wild swimming, or cold water immersion. It’s a curious dance of fear and loathing followed by an addictive and inexplicable joy. I’ve been doing it regularly come rain, shine or driving sleet for more than five years now. Wearing only a flimsy Lycra swimming costume, I’ve plunged into the icy water of my local lido as snow is piled high on the side, into the murky waters of a lake while hail stones bounce off the surface and also during torrential downpours in the sea.

Each time I take the plunge I’m as reluctant to get in as I am to get out. For those of you already signed up to the mental and physical benefits of winter swimming outdoors — devotees of which include Helena Christensen, Fearne Cotton and Susannah Constantine — this will sound familiar. For those of you who are not, it will look like lunacy.

But bear with me because I am not some sporty, hardcore martyr desperate for the thrill of the chill. Quite the opposite. I am 52-year-old mother of four who only learnt front crawl in her late 40s, and I’m also the person turning up the thermostat at home. 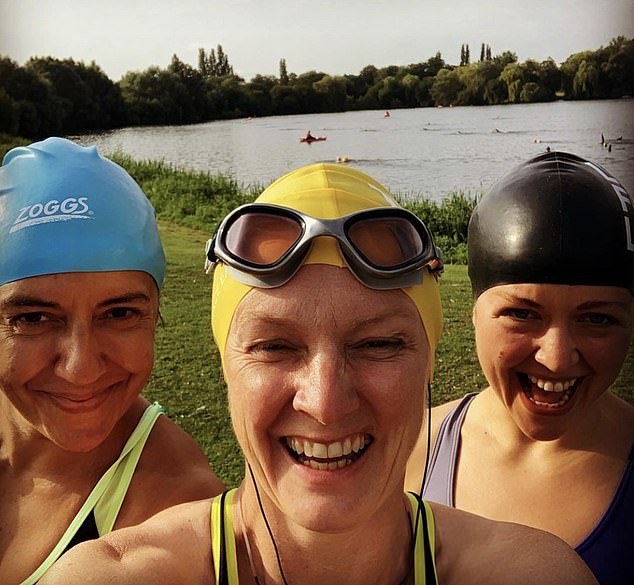 Lorraine (centre) and her friends head out to a lake for an early morning, 8:30am, swim

I’ve been known to wear ear muffs while letting the dog out to relieve itself on a frosty morning. And as for sport, I’ve mostly stuck to air-conditioned gyms.

But swimming outdoors in unheated pools, lakes and the sea has changed my life. I’m healthier, happier, calmer and more capable of coping in any tricky situations life throws at me because of it.

Certainly I rarely get a cold and seem to recover much quicker from any minor ailments I pick up from my children. And it has protected me from the worst symptoms of perimenopause, which at one point, pre-swimming, included a surprise panic attack, overwhelming exhaustion and an out-of-character low mood. Alongside HRT, the cold water has been my mind and body reset for midlife.

I’m rarely evangelical about anything and I am prone to a more cynical outlook on the world of wellness, but I’ve taken to the cold water with religious zeal because it makes me feel amazing. The endorphin high lasts for some time. I can only liken the buzz to the heady days of the 90s rave scene.

As many medical experts often point out, if you found a drug that made people feel like cold-water swimming does, it would save the NHS a fortune. During my aquatic adventures I have met recovering cancer patients, joyous manic depressives and suicide survivors with a contagious lust for life, all of whom have attributed their salvation in part to the restorative powers of the cold water and the extraordinarily supportive camaraderie of the community around it. 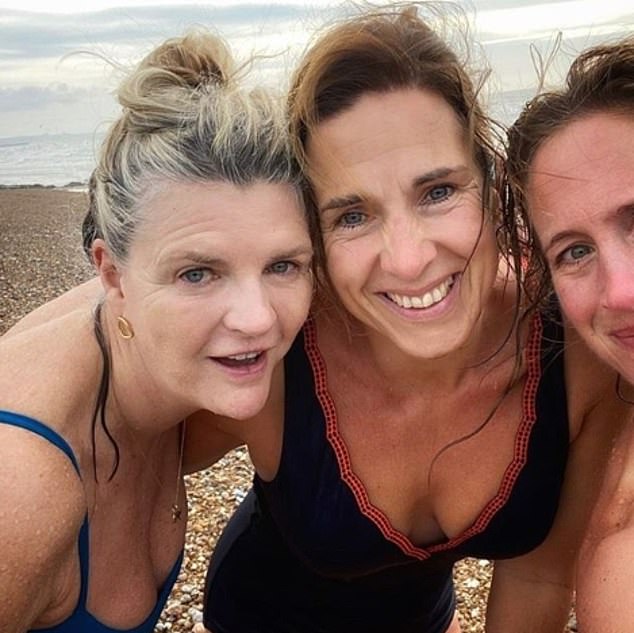 Thrill of the chill: Susannah Constantine (left) is one celeb who has embraced the benefits of wild swimming, with her friends

These people are as far from hardcore as it’s possible to get, yet they go in again and again, relishing the water’s power to softly heal mind and body. My friend Katie Maggs is now a renowned Cornish open water swimmer who credits the cold water with saving her life after she developed myoclonic seizures as a result of a nervous breakdown. Her short film about its miraculous power was nominated for a BAFTA in 2018.

Much of the evidence around the benefits is self-reported but studies are now being conducted into why cold water shock seems to be so curative. Just last week, a world first was announced after researchers at Cambridge University discovered a potential link to slowing down the onset of dementia.

Their research centred on swimmers at my favourite lido in Parliament Hill, North London. They found these hardy regulars, who safely take their body temperatures to hypothermic levels, had a ‘cold shock’ protein in their blood that has been shown to repair some of the damage caused by dementia in mice.

Professor Giovanna Mallucci, who runs the UK Dementia Research Institute’s Centre at Cambridge, says the discovery could lead to new drug treatments which may help hold dementia at bay. The research is at an early stage, but it centres on the hibernation ability that all mammals retain, which is prompted by exposure to cold.

A separate study on swimmers in Devon found it significantly decreased symptoms in those suffering from anxiety and alleviated the mental and physical indicators of the perimenopause and menopause.

So how does it work? The theory is that the shock of cold, particularly on the face, prompts a fight or flight response in the body. The more our bodies learn to cope with this the less inflammation there is. Decreased bodily inflammation protects and strengthens the immune system.

The evidence points to consistent repetition of cold water immersion giving the best health benefits. There is also much science around nature being a mood booster and the connection with meeting people. 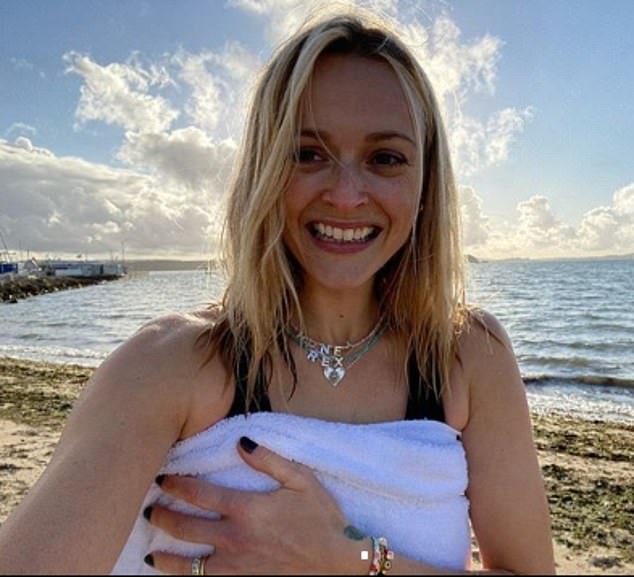 We know loneliness is a killer and that mental health issues often isolate sufferers, but a cold water dip is usually served with a huge community of like-minded water lovers. Everyone is always looking out for you, which doesn’t happen in many walks of life or sport, does it?

In 2018 the BMJ published a report co-authored by Dr Mark Harper, an anaesthetist and cold water swimmer, which examined the shock response and offered what he termed ‘the theory of adaption’. It said the swimmers’ bodies began to adapt to the huge shock of sudden immersion in cold water over time as it activates the parasympathetic nervous system, which, in turn, slows down the heart and speeds up gut and digestive activity. All good things.

But the ‘why’ isn’t important for me. The anecdotal upside is an overwhelming wave of positivity.

You only have to see the smiles of those coming out of the water to concur it’s good for body and soul.

My friends at Shepperton Open Water Lake, where I swim each weekend, have a saying: ‘Whatever the problem — take it to the lake.’ 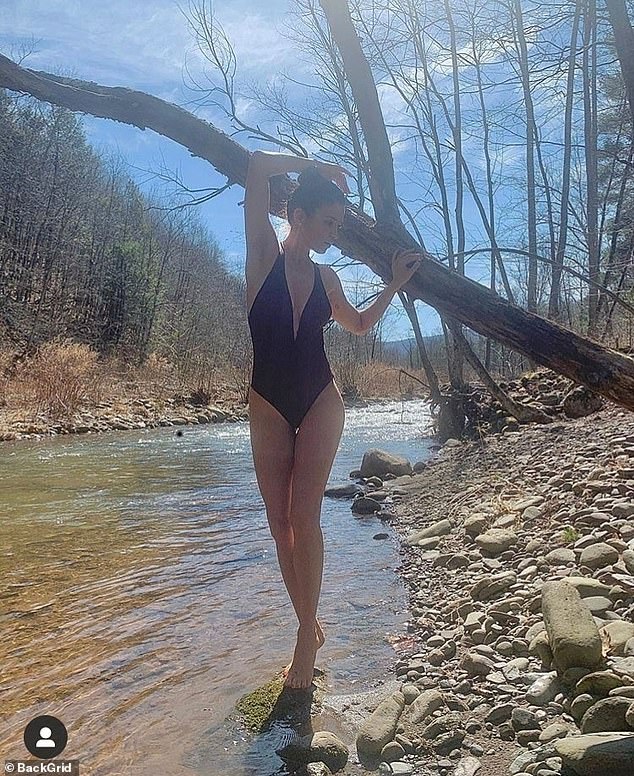 Famous fans: Helena Christensen enjoys a bracing dip in a river as she poses in a bathing suit

I discovered it by accident, aged 47, when I was taking part in a short distance triathlon. I was at a crossroads at work, the children were growing up and I needed something to take my mind off of it all as my mini midlife crisis made me ever more conscious of how much time I had left.

The triathlon demanded a 20- min-ute swim in a wetsuit in May. Despite the grim dread of first entering the water I rather enjoyed it and started to swim, minus a wetsuit, at the lido. I met a group of like-minded women and we formed a team to take part in short swim events.

None of us care about times or distance, just swimming together, nudging each other in on days when a cold dip feels impossible. We rarely wear wetsuits and always finish a race we enter, even if we come last.

In July 2017 six of us swam a non- stop 70k relay across Lake Geneva. Temperatures ranged between 16 and 18 degrees (toasty) and it took us 30 hours. We’d acclimatised through winter to build up tolerance to cold as the night swims in the glacial lake were a challenge. We took to the unheated outdoor lido until it dropped to six degrees. At that point you can stay in for only a matter of minutes. We stuck to five at most.

We learnt the ways of the water with much support from the lido community, because cold-water swimming is a dangerous activity if you get it wrong. When your core temperature drops to hypothermic levels (around 35 degrees) you begin to lose control of parts of your body that aren’t necessary for survival.

You can’t talk, for example, and your co-ordination goes, which could prove lethal. This tends to happen after you’ve left the water as your temperature continues to drop.

It’s impossible to hold a cup or get your warm clothes on. And, of course, you shiver involuntarily. I’ve seen paramedics on more than one occasion laying the warming silver blanket over swimmers who have misjudged their tolerance.

The lifeguards at Parliament Hill will ask you to get out if they think you have been in too long. They’re the heroes of outdoor swimming.

My rule is when you stop feeling chilly and start to believe you’re invincible then it’s time to hot foot it to the changing room or bank of the lake. You get dressed as quickly as possible; woolly hat on first and a warm drink asap. Occasionally I will wear Neoprene gloves and booties to keep the body warmer. I may double up on swim hats or wear a particularly attractive one that covers my ears and goes under my neck. The kids think it is hysterical for this is not a sport to look cool in. But it really is a hobby that anyone can take up if you start slowly building up a few minutes at a time.

Cold showers would help you prepare. Jonathan Cowie, editor of Outdoor Swimmer magazine, advised me that you have to stay in long enough for your core to cool, which differs for everyone.

Once you’ve found your comfort zone and endured the initial shock you begin to learn to control your breath, a skill you can take into many of life’s stressful situations. I find knowing I can endure those few frozen seconds builds a powerful mental confidence. I am so addicted now that if I can’t get in cold water at least once a week a small ball of panic begins to build.

Cold-water swimming is also a great leveller. I tend to faff about then walk into the water slowly but I know an 80-year-old lady who plunges straight in at the deep end before launching into an energetic perfect front crawl.

If I did that I would have a heart attack instantly!

Generations of women use the lido, passing the secret of swim happiness down the family line.

Cold-water swimming does not attract sporty show-offs because it is not about boasting how low, fast or long you can go.

It is about sitting on the side of a lake or a lido, basking in the warm glow of having had a small adventure in your otherwise ordinary day.

An elephant dubbed the 'world's loneliest' landed in Cambodia on Monday, where it is heading for...

If you’re going to ski, here’s how to do it safely in the pandemic