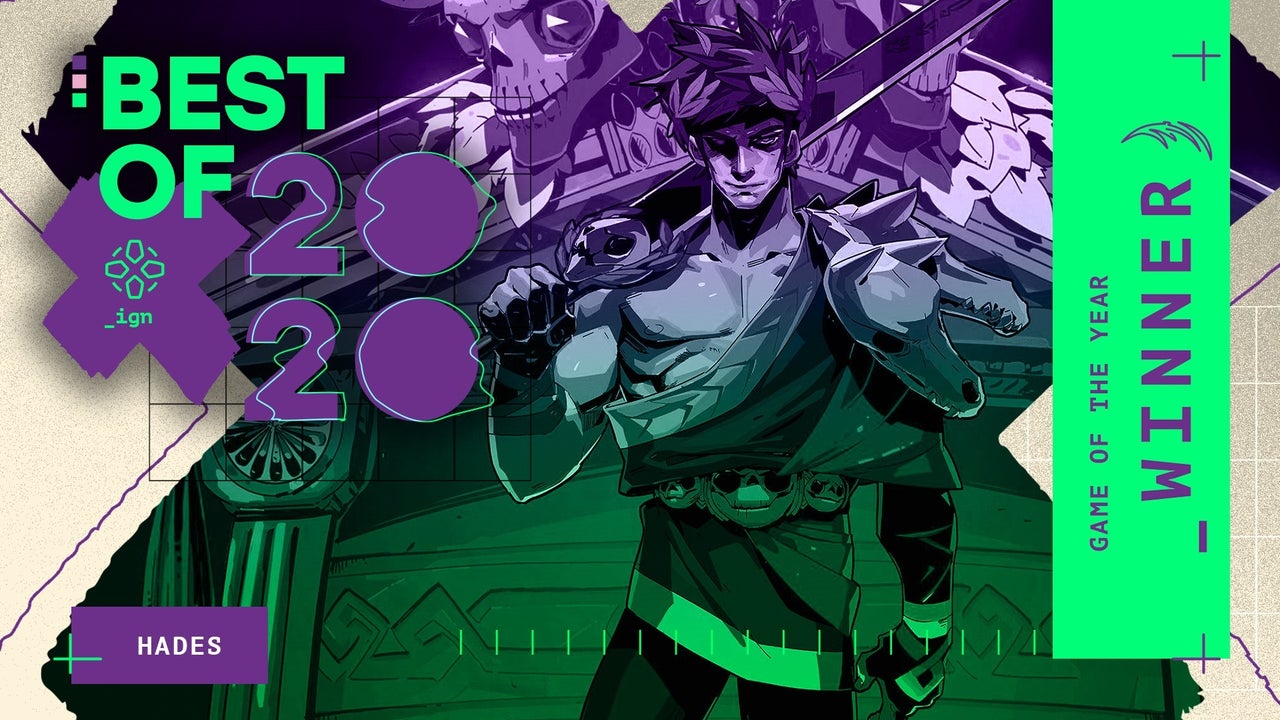 Whether we were gathering cherry blossoms and catching bugs or pillaging medieval England, 2020 kicked off the new decade with some truly exceptional gaming experiences.While the year gave us massive years-in-the-making epics and stunning visions of history, this was our ultimate pick for the best game of 2020:

Hades is a one-of-a-kind rogue-lite that sets the bar for creatively combining wildly different genres and using their strengths to complement each other in unexpected ways. Satisfying, twitch-based combat combined with the Rogue-lite potential of breaking the game through a lucky pull of boons and power-ups leave you feeling like a god. Above all that, though is how Hades ties narrative progression to its gameplay loop. Failed runs, player choice, and built up relationships are authored moments that feel unique to your playthrough in a way that no game before it has even attempted to come close.

A cast of ancient, storied characters recontextualized through a modern lens makes the Greek pantheon feel new. And that coat of paint extends to the literary device of Greek Tragedy. Transforming this tale destined for a tragedy into a fairy tale that promises to stay with you for all time. Hades is everything that video games should strive to be, all rolled into a tightly-woven package for your enjoyment.

Have you played Hades?

Hades was also our pick for the best action game of the year! Check out the Supergiant dev team’s reaction to winning below, or more, check out our full Hades review here.

See Hades at the Nintendo eShop

IGN’s People’s Choice GotY: The Last Of Us Part 2

The Last of Us Part 2 feels like the culmination of Naughty Dog’s storytelling ambitions that first took form with the original Uncharted. Living up to one of the most beloved game stories of all time is no easy task, but Part 2 takes what made the original so nuanced and interesting and doubles down on it in a journey that feels entirely real and unexpected. Through the act of controlling characters who are overtly flawed, you come to understand them, even if it hurts you, the player, in the process. And while this sounds like a huge bummer, The Last of Us Part 2 is ultimately hopeful; not just a story about how violence can beget violence, but a story about overcoming it.

That complex storytelling is also coupled with Naughty Dog’s best third-person action stealth and action combat yet, thanks to some brilliantly intuitive level design and smart AI that makes each new encounter as much a puzzle box as it is a fight to survive. (It also makes this Last of Us multiplayer fan pine for a sequel to that mode.) The Last of Us Part 2 is gruesome, brutal, and full of emotional stakes, and ranks as one of the PS4’s best exclusives ever.

For more, check out our full Last of Us 2 review here!

See The Last of Us Part II at Amazon

Below, you’ll find the list of all our other favorite games of the year.

Game of the Year 2020 Nominees

Animal Crossing New Horizons takes customization to new heights (literally) by allowing you to move earth and water and design your own island (previous games limited you to designing your house interior; you can still do that). What’s more, it allows you to share that experience with friends, with virtual island tours becoming something of a cultural phenomenon of 2020. That’s the real potential this Animal Crossing unlocked: the combination of creating and sharing has been key to its success, and key to its entry into popular culture, perhaps more than any game released this year.Animal Crossing New Horizons is a cute, often clever, totally unique social game, but it can also be a great solitary one as well, with plenty of animal friends to keep you company. Life is good in [YOUR ISLAND NAME] almost one year in. Those that stuck with Animal Crossing New Horizons have not only spent months collecting, decorating, and hosting, but also watching the seasons change along with new updates like DLC holiday celebrations.

For more, check out our full ACNH review!

In a year of excellent open worlds, Assassin’s Creed Valhalla is a big, bold, and ridiculously beautiful Viking-era playground that may trump them all as it impressively unfolds across its sprawling Middle Ages recreation. It finely straddles the line between historical tourism, top-shelf conspiracy theory, and veiled mysticism against the backdrop of a grounded and focused story of family and destiny.

Its fresh takes on the series’ traditional loot and side activities offer a more organic and nuanced experience, while its savage combat reinforces the ugliness of the matter it portrays. It’s rare that a game makes you stop and really process the wonder of what you’re seeing, but Assassin’s Creed Valhalla is loaded with such moments. Despite its many flaws, Valhalla is as memorable and dense as an Assassin’s Creed has ever been on the back of its rugged beauty, smart design, and sheer breadth, offering one of the very best games of the year.

For more, check out our full AC Valhalla review here!

Without a doubt, the most anticipated game of 2020, Cyberpunk 2077’s PC release managed to impress even in the face of an overwhelming wall of hype. We know the last-gen console version is in particularly bad shape (you can see our PS4/XB1 review here) – that’s why we’re specifically only including the PC release in our nominations. It may be far from polished, with visual bugs around pretty much every corner at launch – but the diamond buried in all that rough shines brightly through it regardless.

It’s an RPG with an immeasurable deal of flexibility in dialogue options, mission choice, character builds, and more, and the sprawling, eccentric Night City begs you to uncover all its secrets. While its main storyline may be shorter than CD Projekt Red’s past efforts, it’s still packed with content. Flaws and all, the PC version Cyberpunk 2077 is still one of the most impressive games this year.

For more, check out our full Cyberpunk 2077 PC review here!

Who would have thought that the best part about a remake of Final Fantasy 7 would be its real-time action combat? Despite how improbable that sounds, it’s what wowed me most about a game people had been waiting years for. Its combat is fast and savage, with tons of choice in how you choose to build your characters and nuance in how you take down its wide array of enemies – and yet it somehow still retains the heart of what people remember about the original, if not its literal turn-based systems.

Final Fantasy 7 Remake not only recreated Midgar and its lovable cast of characters in gorgeous fashion, it reinvented their fight in a way that made it shine beyond just pure nostalgia. It’s only a small part of a larger story (a story that can admittedly feel a bit muddled at times), but the part it tells is full of exciting moments, returning and brand new alike.

For more, check out our full FF7 Remake review here!

Much like the in-game wind that guides you to your destinations, Ghost of Tsushima is a gust of fresh air. It is one of the largest steps forward in the open-world action-adventure genre in some time thanks to its excellent combat, clever approach to progression that avoids the pitfall of having to level gate its quests, and its very often emotional side stories that go to great lengths to develop its supporting cast.

With Ghost of Tsushima, Sucker Punch crafted one of the most strikingly beautiful open worlds we’ve seen to date and filled it to the brim with worthwhile encounters, platforming challenges, collectibles, side stories, and much more. And all of this is on top of the free multiplayer mode, Ghost of Tsushima Legends, which adds on a truly excellent cooperative mode for up to four players that features its own progression and challenges, separate from the already excellent main campaign.

For more, check out our full Ghost of Tsushima review here!

See Ghost of Tsushima at Amazon

Valve is known for not messing around when it comes to Half-Life games. The original 1998 game transformed how stories were told in first-person games; the sequel ushered in a physics-based gaming revolution in 2004. Both left marks on the genre so recognizable that you can easily distinguish the games that came before them and the games that came after.

The same, we expect, will be true of Half-Life: Alyx, in which Valve raised the (crow)bar on VR shooters to levels no one had ever seen before. Unprecedented levels of physical interactivity combine with top-tier graphics and storytelling to absolutely drench us in the atmosphere of Valve’s legendary universe. Once you play it and see what’s possible, you’ll never look at other VR games the same way again.

For more, check out our full HL Alyx review here!

Insomniac’s second foray into its Spider-Man universe builds on the strong foundations of the original and tells a more impactful story, improves upon the combat and collectibles, and makes the already beautiful open-world NYC even more gorgeous. Yes, Miles Morales may be a smaller package than its predecessor, but everything here feels integral to the game’s core – Miles himself.

Backed by a wonderful ensemble cast who each earn their time in the spotlight, Miles is a warm, charismatic, and vulnerable protagonist, driven by the love of his family, friends, neighborhood, mentor, and society as a whole. He’s bolstered by the wonderful web-swinging Insomniac perfected in the original, along with new stealth and electric combat powers that make every encounter more varied. This Spider-Man adventure is hopefully just the beginning of Miles’ journey in this universe.

Never before has an “open-world” game been quite as literal as Microsoft Flight simulator. The incredible complexities of its real-world Bing map integration allow you to fly over, take off from and land at any airport in the world while taking in some of the Earth’s most breathtaking wonders.

They’re all here, waiting for your flight. But beyond the astonishment and freedom to visit literally any place on planet Earth, the flight modeling is some of the most realistic ever crafted. It’s truly an incredible technological achievement, one that gives you the ability to fly from anywhere to anywhere in astounding detail.

There are plenty of other awards beyond just the Game of the Year! Check out all our platform, genre, and design winners below!

Be sure to check out all of our other Game of the Year award winners, as well as our picks for the best movies, TV shows, comics, and anime of 2020!