Insulate Britain’s leader insists ‘no ambulances have been stopped’ by their protests despite the eco-mob blocking paramedics on a 999 call only three weeks ago.

Liam Norton defended the actions of the activist group in an interview on Saturday outside the Royal Courts of Justice in London during a protest.

He said their actions are ‘what’s required in order to create change in our system to protect every single person in this country’.

Regarding comments that Insulate Britain protests have stopped people from going to hospital, Norton said these cases were ‘almost nil’.

He added: ‘People could find another route to hospital, there’s no examples of ambulances being stopped’.

His statement is at odds with multiple reports that ambulances have been caught up in tailbacks due to the protests.

He also stated in the interview that the climate agreements made at COP26 ‘tantamount to genocide’ and that the NHS would collapse within a couple of decades. 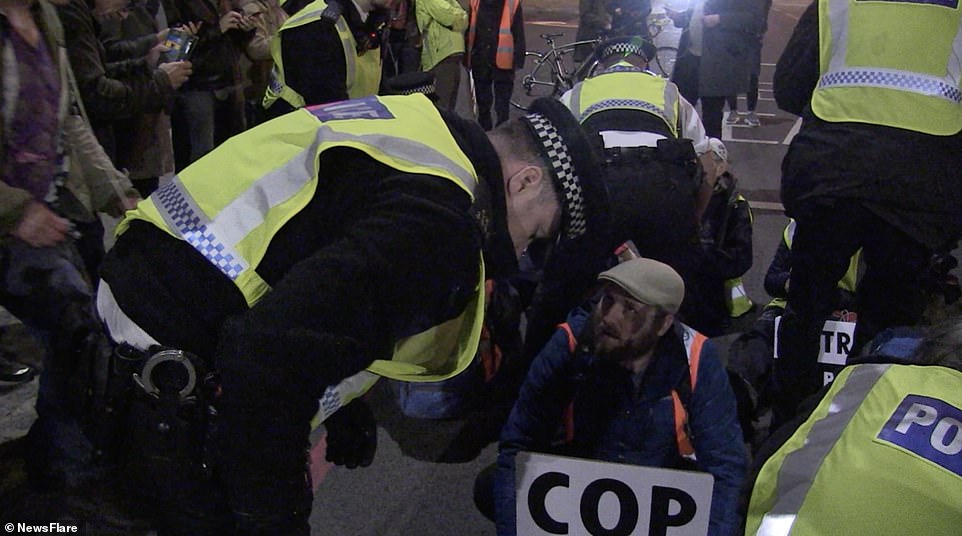 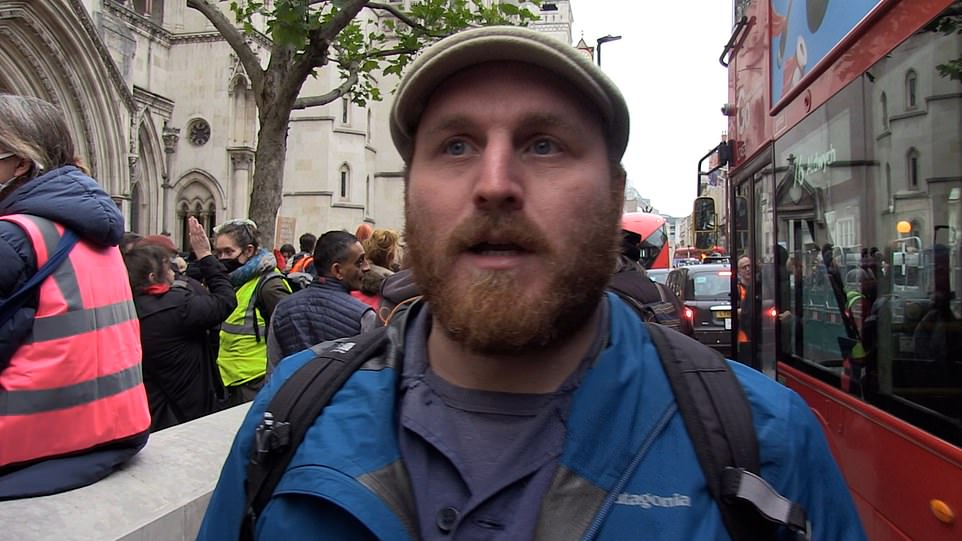 He said the UK government was ‘leaving millions of people to die’ as he was arrested after blocking a junction during a protest in Vauxhall, south London, on Saturday.

Norton said: ‘This is the start of a journey to resist criminality by our government that are leaving millions of people to die, they’re allowing unimaginable horror to take place.’

The leader went viral in September after walking off the set of ITV’s Good Morning Britain’ after an argument with presenter Richard Madeley. 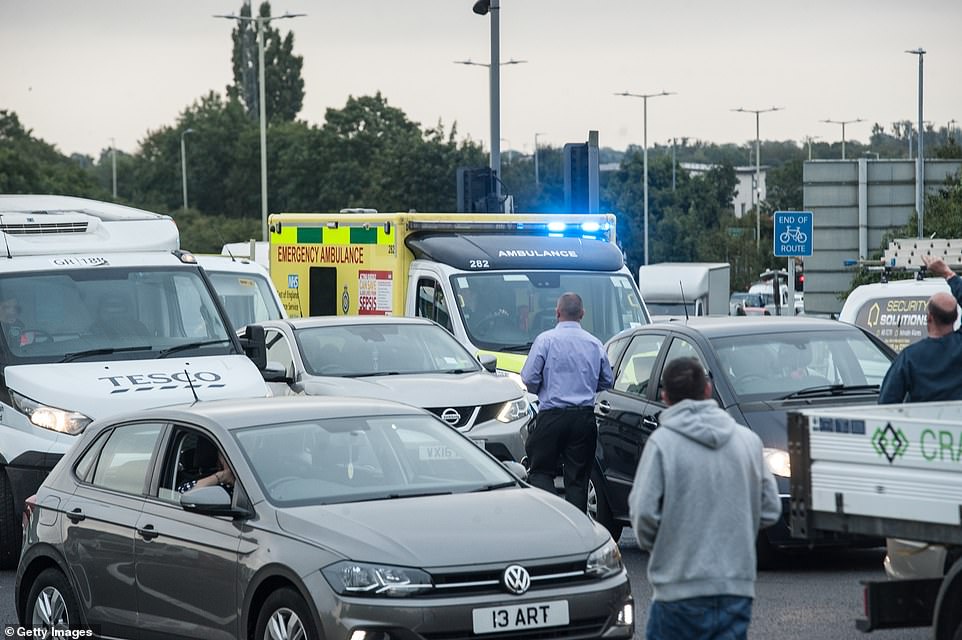 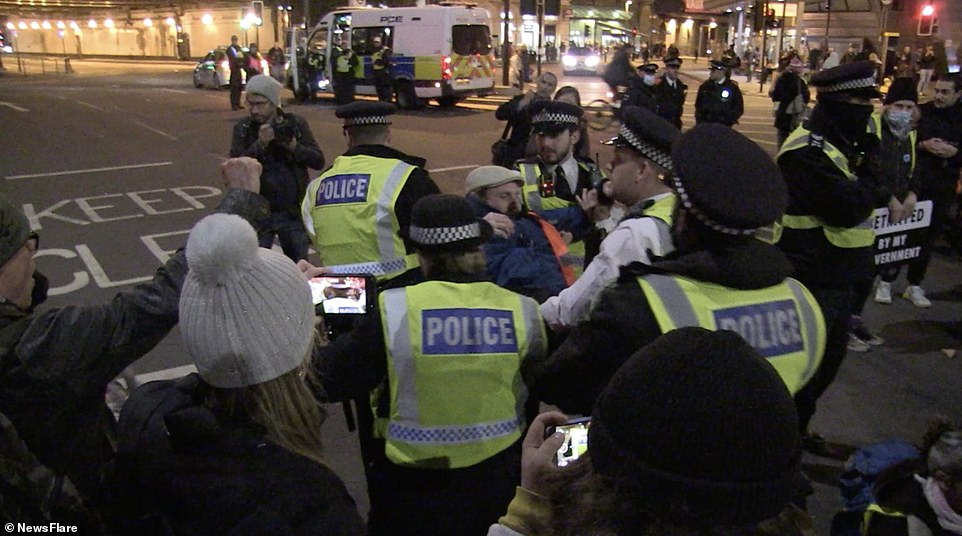 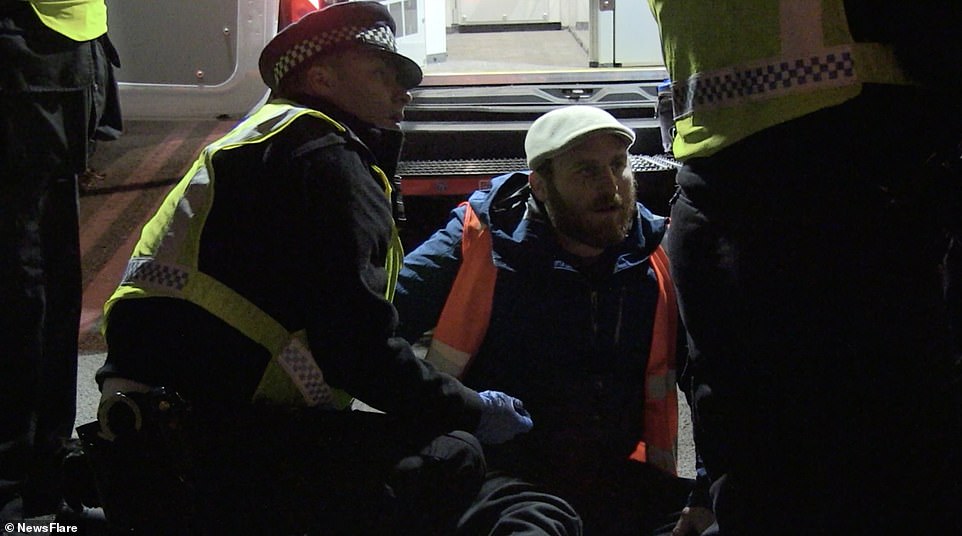 Regarding comments that Insulate Britain protests have stopped people from going to hospital, Norton said these cases were ‘almost nil’ 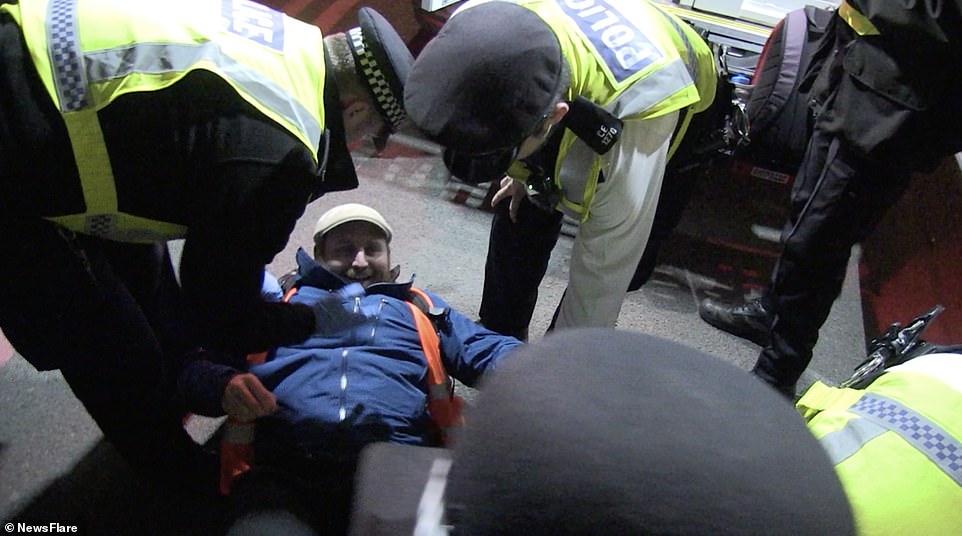 He added: ‘People could find another route to hospital, there’s no examples of ambulances being stopped’ 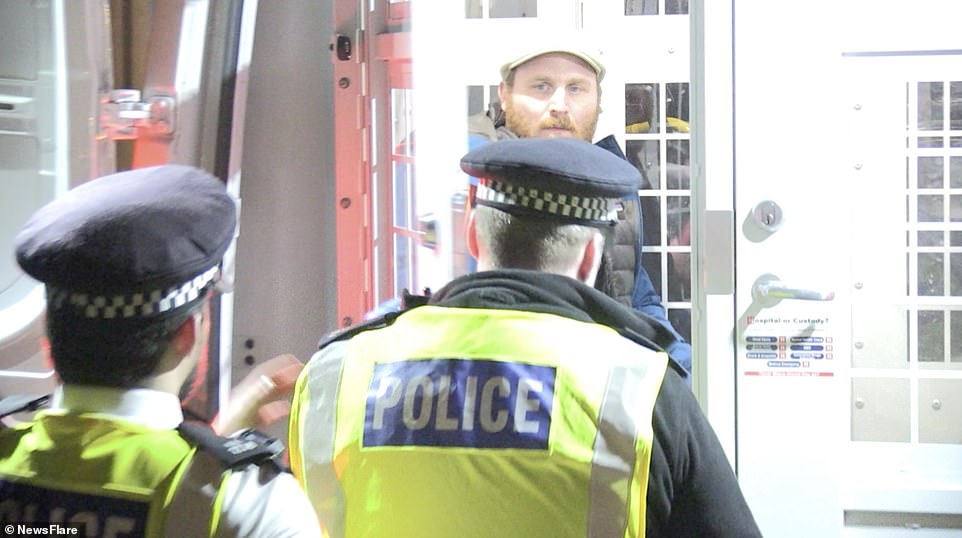 He said the UK government was ‘leaving millions of people to die’ as he was arrested after blocking a junction during a protest in Vauxhall, south London, on Saturday

Hundreds of Insulate Britain activists forced Lambeth Bridge, London to close for five hours on Saturday, with the Metropolitan Police saying traffic was being diverted throughout the day ‘for the safety of all’. 30 protestors were arrested, the force announced.

The eco-zealots marched throughout the city on Saturday afternoon, blocking roads and causing chaos for thousands of commuters in the capital while chanting: ‘What do we want? Climate justice. When do we want it? Now.’

Pictures showed members of the eco-mob sitting on the A3203 on Lambeth Bridge with signs reading: ‘Betrayed by my government’ at around 2pm on Saturday, after warning earlier this week that the group would be returning to direct action at the Royal Courts of Justice in protest at the jailing of their road-blocking comrades.

A handful of protestors were pictured being forcibly dragged away by police officers, but the hated eco-group were able to keep one of London’s major bridges closed for more than four and a half hours, resulting in further travel trouble for thousands of frustrated road-users.

At around 5pm, the Metropolitan Police finally announced that they had barred protestors from Lambeth Bridge under the terms of the Public Order Act, while urging those in attendance to ‘leave the bridge’ on Twitter. At 7.03pm, the force tweeted the bridge had reopened, more than five hours after the first protest.

They added: ‘Lambeth Bridge remains shut as does Vauxhall Bridge southbound and some of Vauxhall Cross. We are working to get the roads re-opened ASAP.’ 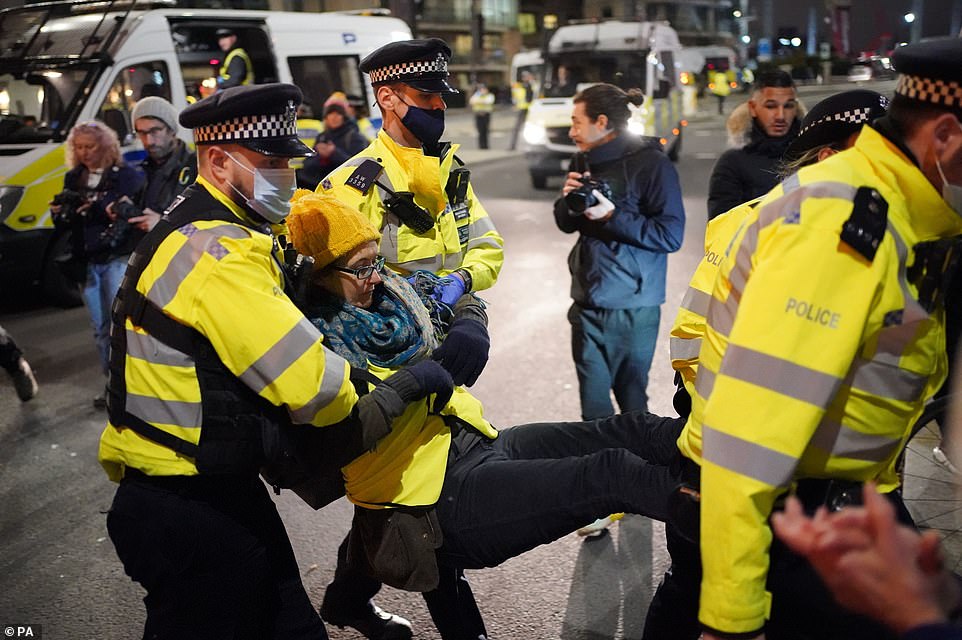 The eco-zealots managed to block one of London’s busiest bridges for five hours, despite warning earlier this week that they would protest on Saturday. Pictured: An Insulate Britain activist is removed by police officers on Vauxhall Bridge, London 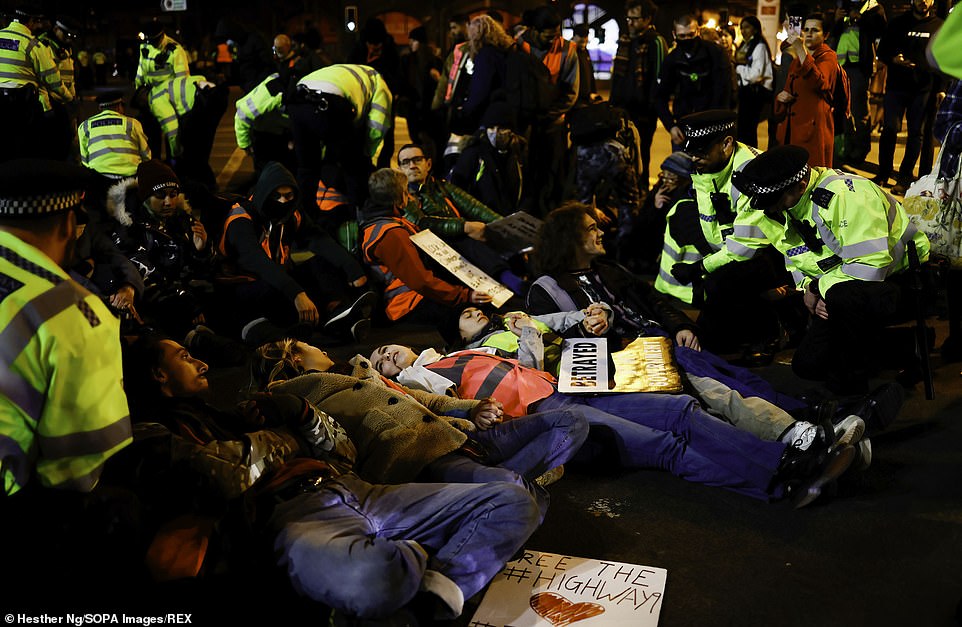 Members of Insulate Britain’s eco mob risked the fury of millions of Brits after they blocked more roads in the capital in protest at the jailing of nine of their members earlier this week. Pictured: Protestors block the road and hold signs at Vauxhall Bridge, central London 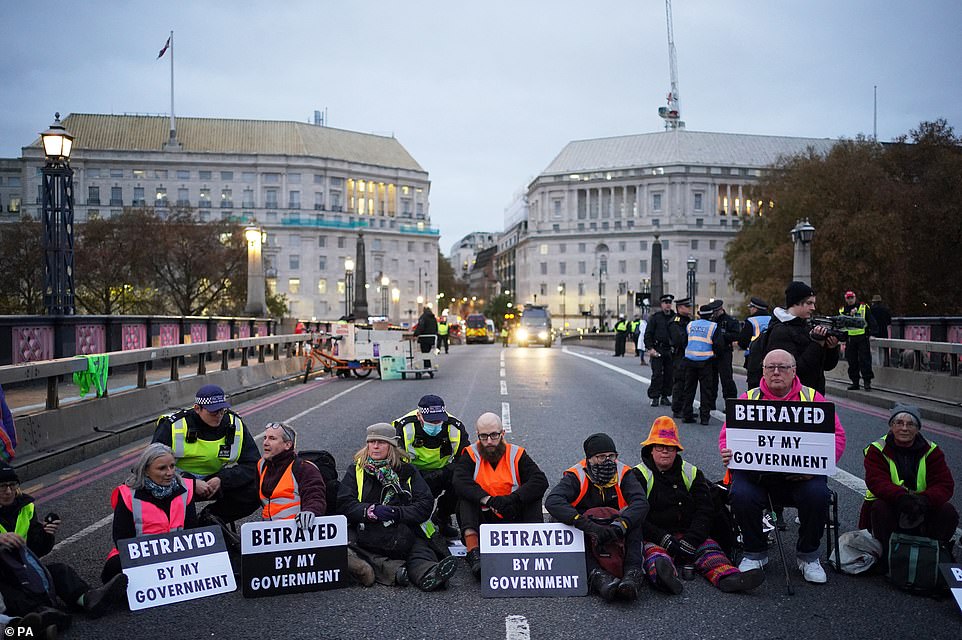 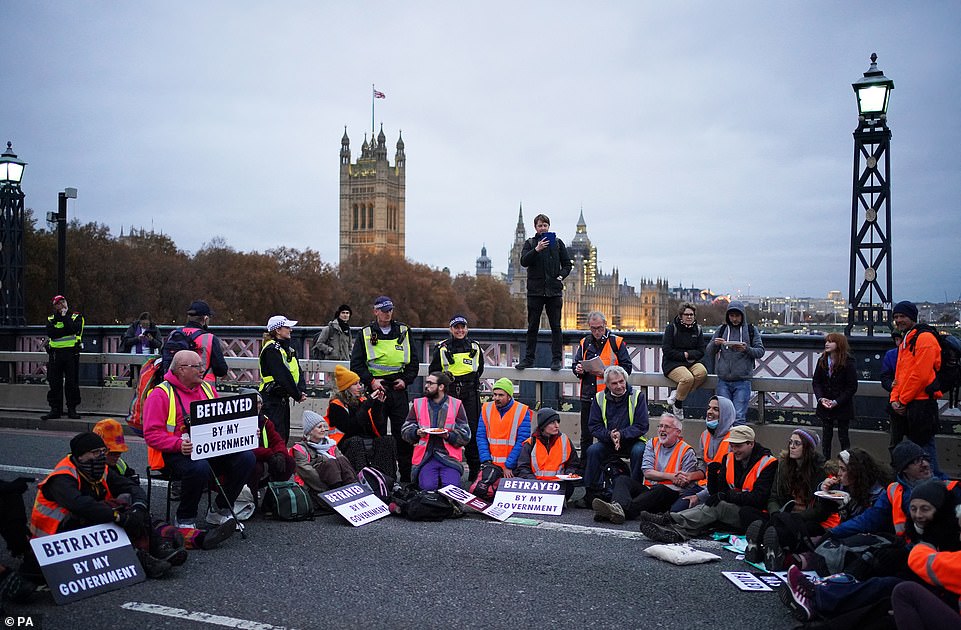 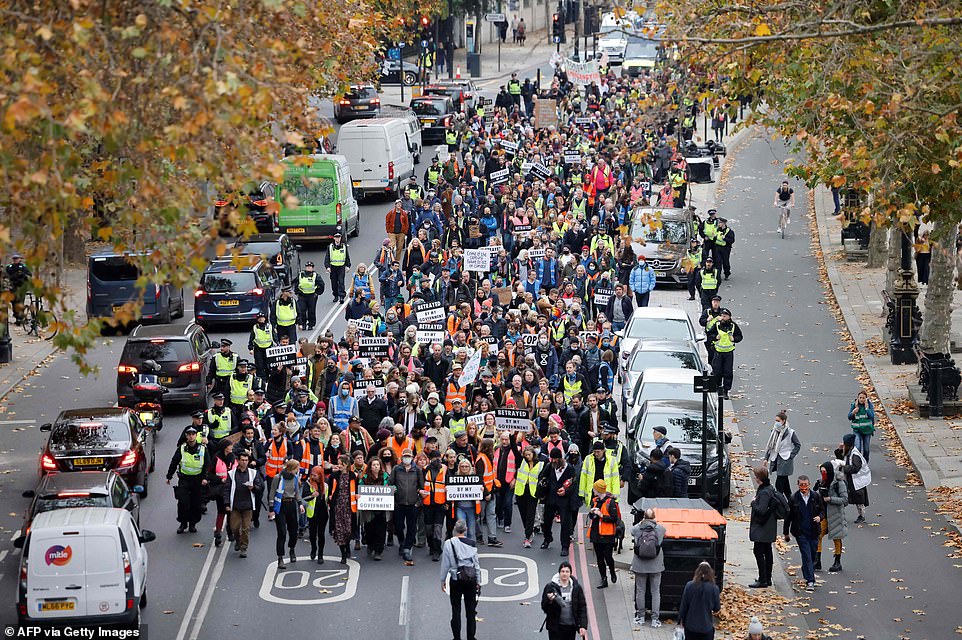 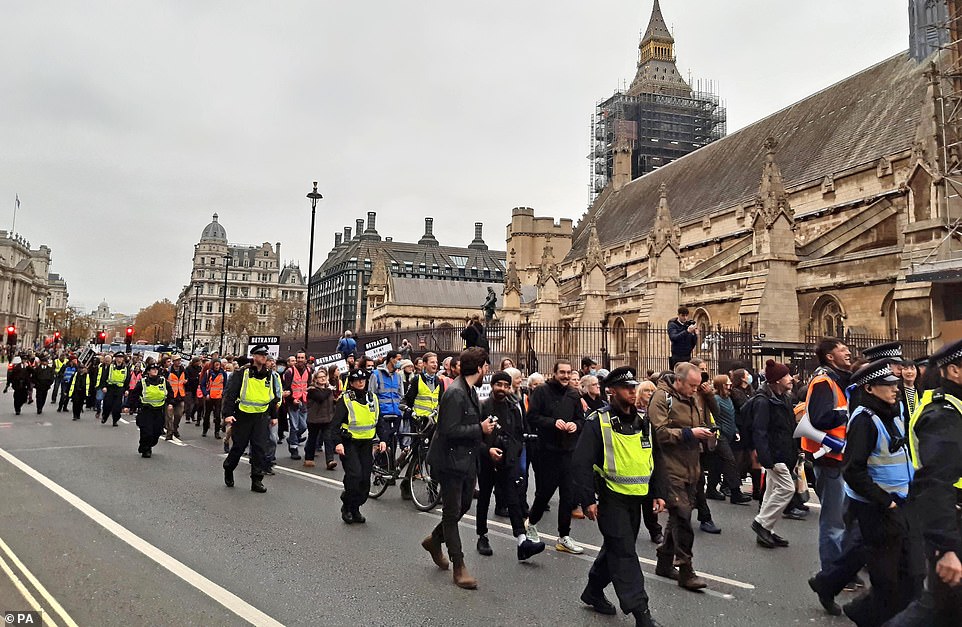 Insulate Britain began a wave of protests in September and has blocked the M25, roads in London including around Parliament, and across Birmingham, Manchester, and the Port of Dover in Kent.

In a warning directed towards the heavy police presence around the event, Gully said: ‘These streets are ours and we will put one foot in front of the other, and dare you to stop us.’

She added: ‘You can jail the resistor but not the resistance.’

The group, watched closely by uniformed officers, then set off for a protest walk around nearby central London streets towards Westminster chanting ‘power to the people’.

Cheers rang out during the walk as a campaigner told the crowd, ‘good people have a duty to disobey bad laws’.

Extinction Rebellion activist Alanna Byrne, who took part in the protest, said: ‘When I saw the Highway Nine give their testimonies in court this week, I knew I had a duty to take a stand today in their place.

‘These people willingly gave up their freedom to push the Government to act on the greatest crisis we’ll ever face.

‘The failure of Cop26 should shock everyone into action. World leaders are protecting the interests of the fossil fuel industry over the general public – they are not coming to save us.

‘All we have left now is to come together on the street and rebel for all we hold dear.

‘The Government thinks that this injunction will scare people into submission and stop taking action. But the opposite is true.

‘This has only ignited a fire in people that will spread faster than they know. As Emma Smart said in the courtroom on Wednesday: ‘I will not be a bystander.’ And neither should you.’

Zoe Cohen said she had travelled from her home in Warrington in the north-west of England to take part in the demonstration out of frustration and anger.

She said: ‘I am angry, distraught and grieving for the huge amount of nature that we have already lost.’

The 51-year-old said that ‘ordinary people should not have to do this and risk prison’.

Ms Cohen added: ‘Any disruption is microscopic to the suffering of millions of people who are dying now across the world due to this crisis.’

Insulate Britain said it was not involved with setting up the event, which was described by those who took part as community-led.

The nine protesters were sentenced at the High Court on Wednesday after they admitted breaching an injunction by taking part in a blockade at junction 25 of the M25 during the morning rush-hour on October 8.

Ben Taylor, 37, was given a longer sentence of six months ‘to deter (him) from committing further breaches’ after his submissions to the court on Tuesday were described by Dame Victoria Sharp as ‘inflammatory’ and a ‘call to arms’. 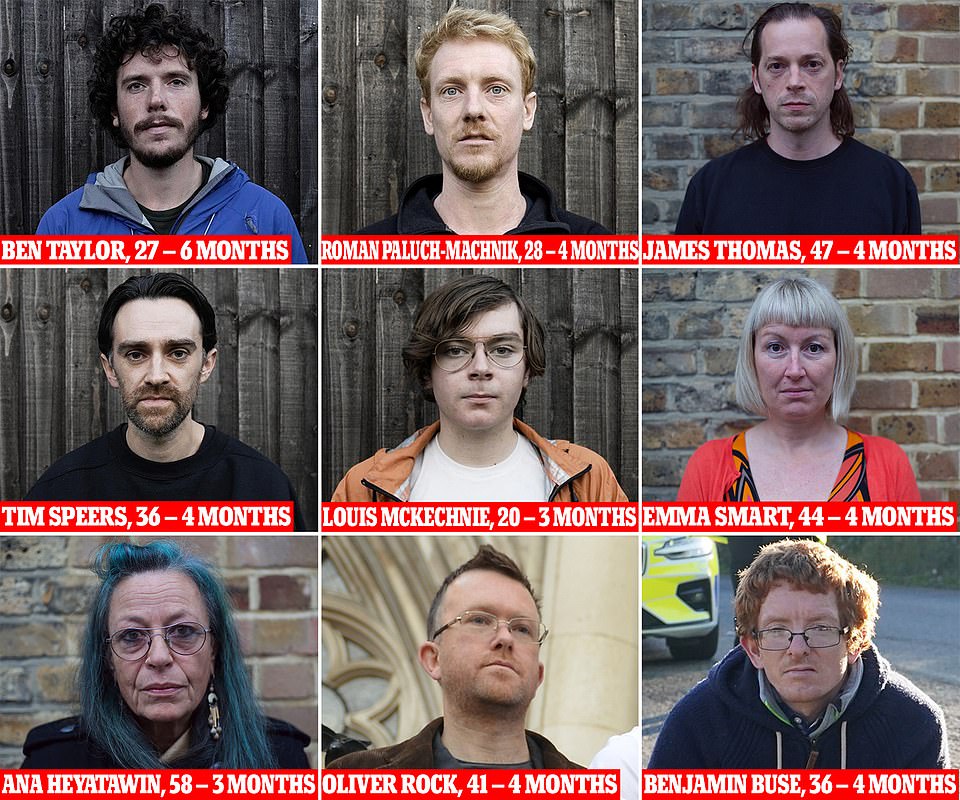 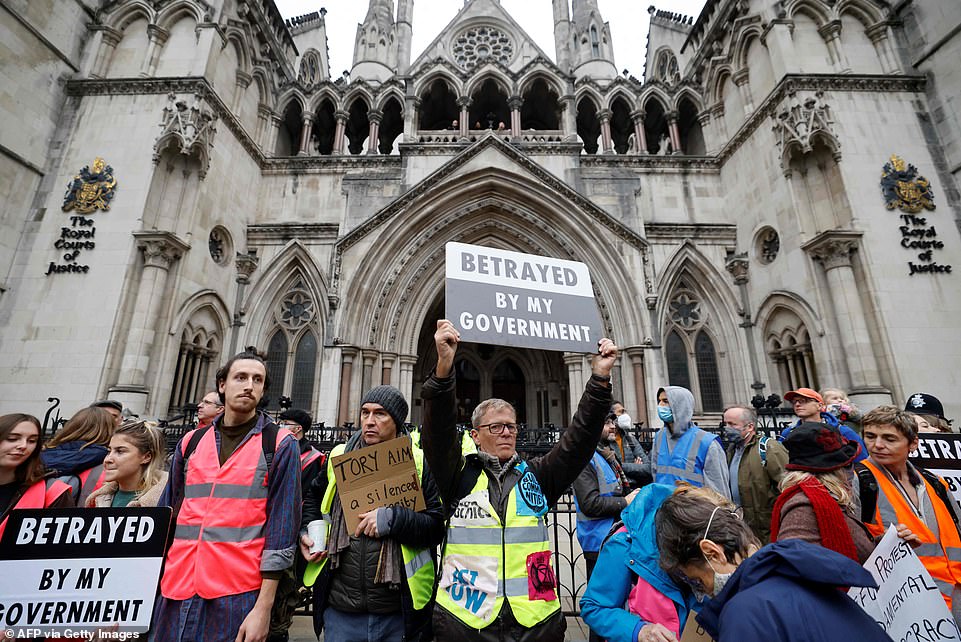 Cars that didn’t cut the mustard: Motors on sale for the shortest time