Celebrities like Jennifer Aniston swear by intermittent fasting as the easy key to meeting their weight loss goals and maintaining enviable figures – but the trendy method of eating only between noon and 8pm doesn’t work, according to newly-published science.

Even Dr Ethan Weiss, co-author of the new study, published in JAMA Network Open was sure eating on that schedule was working for him. He was so sure, he stuck to  the routine for seven years and suggested so-called 16:8 fasting to his patients.

As far as diets go, it was easys, and the evidence that it worked with no other adjustments to what was eaten – just when it was eaten – was astounding…in mice.

But when Dr Weiss and colleagues repeated the same experiment, telling one group of overweight or obese people they could eat whatever they wanted, whenever they  wanted, another that they could do the same, but only between noon and 8pm, the  results were much more underwhelming.

Over the 12 weeks of the experiment, everyone lost weight, whether or not they were fasting. But no one lost much weight, dropping an average of about 2.2lb over 12 weeks. 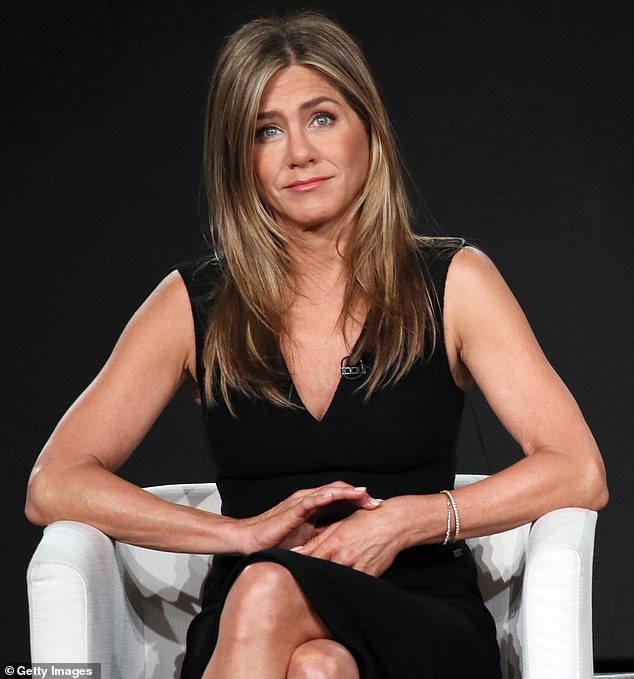 Jennifer Aniston said in a 2019 Radio Times interview that she only eats between noon and 8pm. New research suggests her intermittent fasting diet does not work (file)

‘This is not going to be a magic bullet.’

Intermittent fasting is one of the trendiest ‘diets’ out there, adopted by Aniston as well as Khloe Kardashian, Twitter CEO Jack Dorsey and scores of other celebrities,

In truth, they all follow different variations on the method, which is not so much a  diet as a schedule.

Among the simplest and most popular intermittent fasting plans is the 16:8, which simply requires going for 16 out of 24 hours in a day without  eating, and giving yourself an eight-hour window during which to eat.

That window is typically from about noon to 8pm.

The theory is that dinner is a particularly hard meal to skip, in part because it’s so often as much a social affair as a nutritional one. 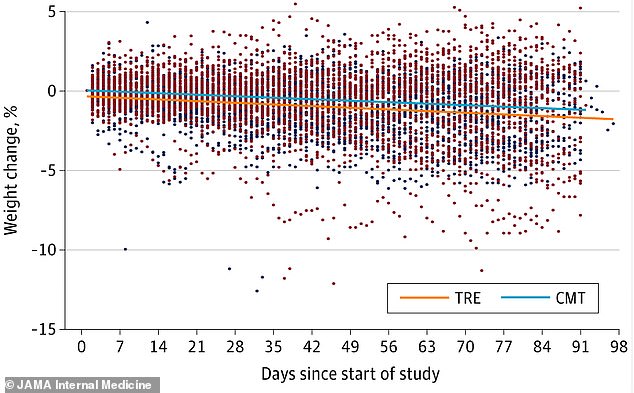 Over the 12  weeks of the study, the participants lost  about 2.2lbs on average – whether they were on the time restricted eating schedule  (orange) or not (blue)

Most followers of the 8:16 plan end up skipping dinner, in an upset to the 50s mantra that breakfast is the most important  meal of the day.

But the 16 hours-off, eight hours-on schedule of eating is really the only rule of the diet.

And that’s part of its appeal.

‘One of the promises of this  intervention is that it’s relatively  simple – it doesn’t require a lot of complicated [steps] or counting calories,’ said Dr Weiss.

WHAT IS THE INTERMITTENT FASTING 16:8 DIET?

The 16:8 diet is a form of intermittent fasting.

Followers of the eating plan fast for 16 hours a day, and eat whatever they want in the remaining eight hours – typically between 10am and 6pm.

This may be more tolerable than the well-known 5:2 diet – where followers restrict their calories to 500–to-600 a day for two days a week and then eat as normal for the remaining five days.

Many prefer to eat between noon and 8pm as this means they only need to fast overnight and skip breakfast, but can still eat lunch and dinner, along with a few snacks.

When you do eat, it is best to opt for healthy options like fruits, vegetables and whole grains.

And drink water and unsweetened beverages.

Drawbacks of the fasting plan may be that people overindulge in the hours they can eat, leading to weight gain.

It can also result in digestive problems over the long-term, as well as hunger, fatigue and weakness.

Years ago, Dr Weiss was impressed by the simplicity and consistency of the research that had come out about mice that were put on intermittent fasts.

They were given the same amount of food, except that one group was only given access to the food for a portion of the day.

Each group of animals ate about the same amount of the same  food, yet those only given eight hours to eat lost weight.

‘The theory was that there must some metabolic advantage, in changes of Circadian  rhythms,  or hormones secreted just by narrowing the time that they eat during the day,’ said Dr Weiss.

‘I believed this and I did it myself.’

Dr Weiss dropped a few pounds. He stopped craving breakfast. It seemed like the diet was working. A couple of years ago, he added a low-carb diet plan to his fasting schedule. Then, the pounds really started to fall off.

‘I had to buy all new clothes,’ he said.

But he and his team set out to prove the hypothesis that intermittent fasting alone could lead to weight loss, by essentially recreating the mouse experiment, but with two groups of 57 and 59 people who were overweight or obese.

They told the second group essentially the same thing, but they must consume all the solid food they would eat each day between noon and 8pm.

Everyone lost a negligible 2.2lbs over the study’s 12-week period. The person who lost the most weight was in the control group, and shed about eight percent of their body mass.

In fact, those who were on the time-restricted eating plan lost more lean body mass  than fat body mass.

‘So the weight you do lose is the wrong kind of weight,’ Dr Weiss said.

But why has it seemed to work for some, as it has seemed to for Jennifer Aniston, and even Dr Weiss himself?

‘This is the classic placebo effect,’ he said.

‘When you think you’re doing something, it tends to work.’

‘We have to improve’: Jurgen Klopp claims Liverpool have not made a statement in win over Arsenal

'We have to improve': Jurgen Klopp claims Liverpool have not made a statement in win over Arsenal