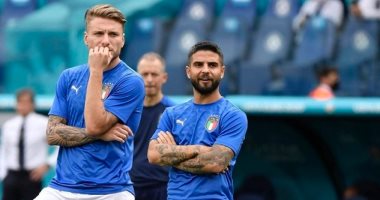 The Italian team will miss the services of Lazio striker Ciro Immobile and Napoli star Lorenz Insigne, during its visit to Lithuania, scheduled for 9:15 pm on Wednesday, in the sixth round of the third group of European qualifiers for the 2022 World Cup in Qatar.

And the Italian national team’s official account on the social networking site “Twitter” announced that the duo Ciro Immobile and Lorenzo Insigne had left the team’s camp, as the first suffered a muscle injury, while the second obtained permission for personal reasons.

The Italian team, led by coach Roberto Mancini, is seeking to regain the tone of victories again, after a goalless draw against Switzerland, in the confrontation that took place on Sunday evening at St. Jacob’s Park, as part of the fifth round of Group C matches. The Italian national team also fell in the last round before the last match, in a draw against its guest, Bulgaria, with a goal each.