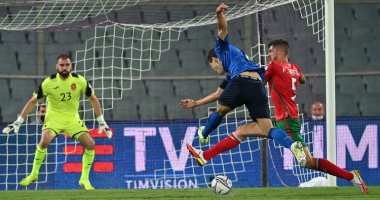 The positive tie was settled with a score of 1-1 in the first half of the meeting between Italy and its Bulgarian counterpart, in the meeting that brings the two teams together, at the “Artemio Franchi” stadium in Florence, in the fourth round of the third group of the European qualifiers for the 2022 World Cup.

Federico Chiesa, Juventus star, scored Italy’s goal against Bulgaria in the 16th minute of the match, with a great individual effort, and ended it with a crawl shot to the left of the Bulgarian goalkeeper.

The Bulgarian team managed to equalize in the 39th minute of the match through player Atanas Lev.

Italy leads the third group standings in the European qualifiers for the World Cup, with 9 points collected from winning 3 matches, while Bulgaria comes in fourth place with one point.

The Italian national team, led by Mancini, enters the European qualifiers for the World Cup, in high spirits, after winning the European Nations Cup “Euro 2020”, on July 11.

The Azzurri did not lose in 34 official matches, only 90 minutes away from the record achieved by Spain and Brazil in history.

The Italy squad was as follows:

7 signs of a digestive problem, including lack of sleep and skin irritation

Taliban told evacuees that the State Department can go 'f*** themselves'