Jeffrey Epstein told Ghislaine Maxwell to offer a reward to anyone who could discredit Virginia Roberts after she accused them of rape, newly unsealed court records from a 2016 deposition show.

In 2015, Roberts sued Epstein and Maxwell claiming they’d defamed her by calling her a liar in her public allegations against them which included that they’d sexually trafficked her to, among other people, Prince Andrew.

After she filed the lawsuit, Epstein and Maxwell tried to squash her claims by discrediting her.

In an email dated January 12 2015, Epstein told Maxwell: ‘You can issue a reward to any of Virginia’s friends, aquaints, (sic) family, that come forward to help prove her allegations are false.

Maxwell expressly denied giving anyone a reward for trying to discredit Roberts, answering ‘absolutely not’ when questioned. 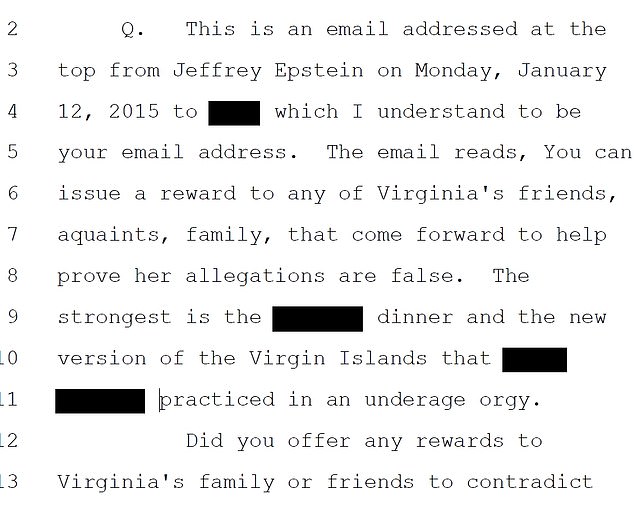 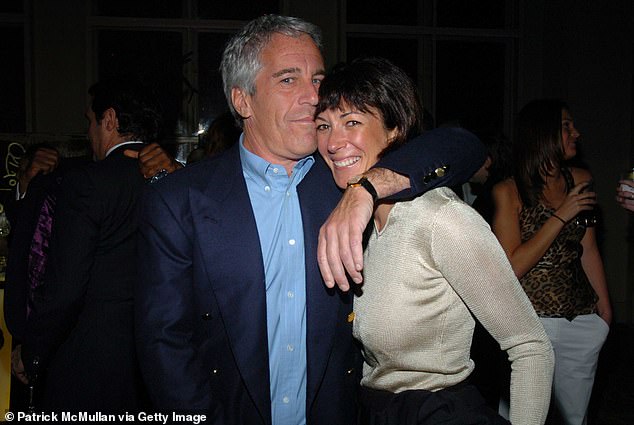 Epstein and Maxwell in 2005. The pair denied all of Roberts’ claims. Epstein died last year

Four years earlier, after Roberts claimed in an interview that she’d slept with Prince Andrew when she was 17 – a claim he has persistently denied ever since – Maxwell and Epstein discussed their media response.

They discussed writing ‘a letter to the editor’ – presumably of The Mail on Sunday which was the first to publish Roberts’ claims – about the ‘age of consent’. 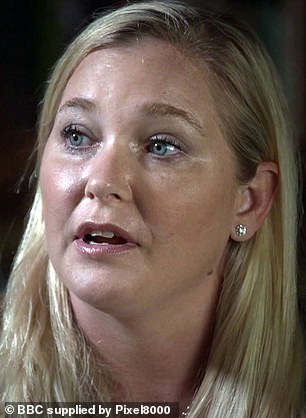 Roberts, shown in 2019, said she was 17 when she was ‘trafficked’ to Prince Andrew – a claim he strongly denies and has for years

‘We should think about the letter to the editor. School can be university. Age of consent in Florida is complex,’ the email said.

It’s unclear if those are Maxwell’s words or if they were written by someone else and she forwarded the email on to Epstein.

The document says: ‘It’s dated Friday March 11, 2011 from Maxwell to Jeffrey with the title, Daily Mail and there is a forward from [redacted] to you and a number of other individuals, that’s on the cover page.’

The email, written by someone else, went on: ‘If you are 16 years old, a sexual relationship with someone between 18 and 24 is legal in Florida. Two persons between 16 and 24, Florida statute 794.05. A person 24 years or of age or older who engages in sexual activity with a person 16 or 17 years of age commits a felony in the second degree.

Maxwell said that she was not ‘concerned’ with the age of consent but that the person who sent her the email, that she then forwarded to Epstein, was trying to be ‘helpful’.

‘Virginia in ’11 was claiming she was 15 and we thought she was 17. I didn’t know what the statutes were in Florida and I think he was just trying to be helpful so I would know,’ she told the lawyers in the deposition.

On June 8, 2011, she and Epstein discussed an article in Vanity Fair. 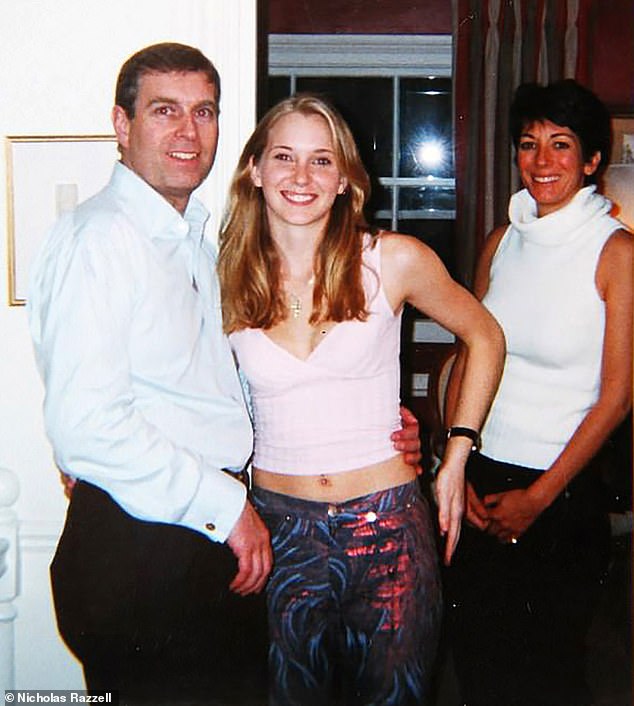 Roberts with Prince Andrew and Ghislaine Maxwell in Maxwell’s London home in 2011. Roberts shared the photo in 2011 as proof of her claims

She asked him: ‘Do you have a problem with anything I said?’

Maxwell told the lawyers in her deposition: ‘That was asking in my parlance that I wanted him to check it for accuracy.’ 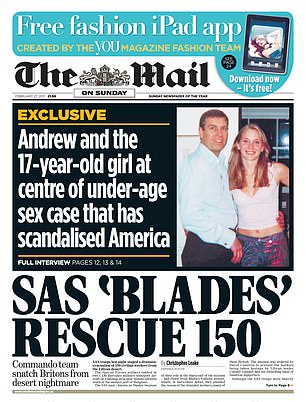 The Mail on Sunday published the first claims about Prince Andrew, Maxwell and Epstein in 2011

Later, she said: ‘I only wanted to be accurate in any factual statements that I made.’

There is only one 2011 Vanity Fair article about Epstein publicly available now and Maxwell is not quoted in the piece.

Maxwell said she had a ‘lawyer’ who was helping her with her statements at the time but that she and Epstein never coordinated.

‘I have a lawyer who was working on this and that was — I asked, I believe as I recollect asked him for information to make sure I was being accurate in the representations for whatever I was discussing,’ she said.

She also drafted a letter that was intended to be sent to newspaper editors in which she accused Roberts of fleeing the US to ‘avoid being arrested for grand theft’, the deposition reveals.

‘I believe she stole money from somewhere where she worked,’ Maxwell said in her deposition.

When asked how she knew that, she replied: ‘I don’t know how I know that.’ 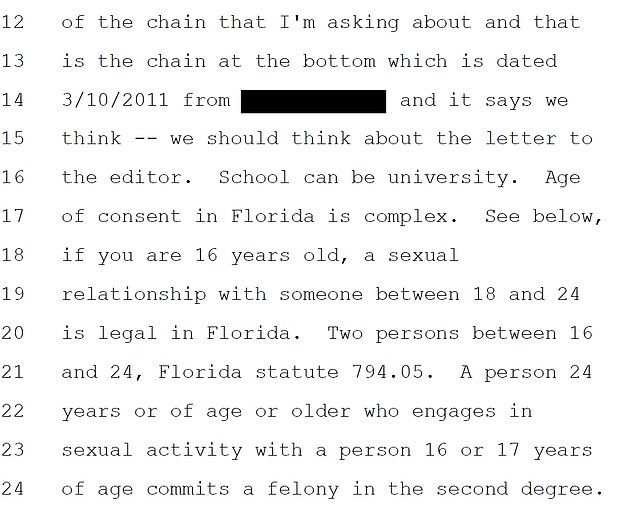 Maxwell and Epstein in 2011 also discussed how to handle the media circus surrounding Roberts claims. Among their considerations was a letter ‘to the editor’ – presumably of The Mail on Sunday. They also discussed Florida’s age of consent, calling it ‘complex’

One of her lawyers later sent her an email with the subject line ‘VR cried rape… prior case dismissed as prosecutors found her not credible.’

The lawyer accompanied it with a note saying: ‘Some helpful leakage…’

Maxwell was then asked if she had ever leaked to the press.

Epstein also asked Maxwell if she wanted another woman to come forward to say she’d been his girlfriend for some of the time they knew each other. That woman’s name is redacted.

Maxwell said it was because ‘the press’ had been ‘characterizing’ her as ‘with Jeffrey’ when she hadn’t been.

She explained it by saying: ‘I’m sure I would loved anybody to come out and say they were with Jeffrey rather than me. ‘

More than 400 pages became public on Thursday for the first time. Maxwell is currently in jail in New York awaiting a sex trafficking trial.

She tried to block the release of the files repeatedly.

Allie Adams was proud of exercising all through her pregnancy and — despite a long and...