More British-based jockeys and trainers could travel to Paris for this weekend’s prestigious Arc meeting after the BHA revealed they hope to agree new Covid-19 travel protocols with Public Health England.

The need for a prolonged period of self-isolation on their return would be removed and replaced by a stricter series of tests. An announcement is expected on Tuesday.

The changes could mean champion jockey Oisin Murphy is able to ride Japanese hope Deirdre in the Arc and Jim Crowley maintaining his partnership with sprinter Battaash in the Prix de L’Abbaye. 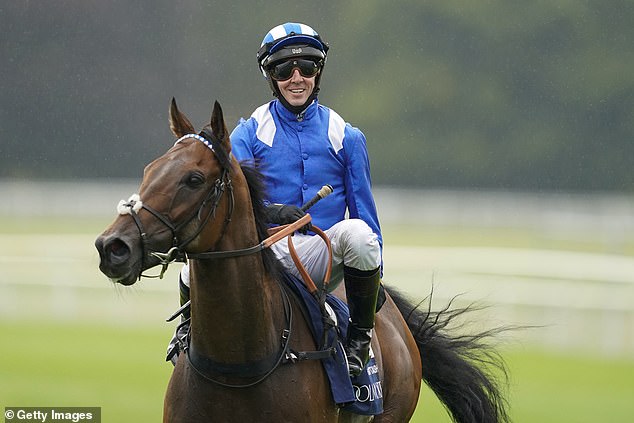 Trainer Charlie Hills said last week that Dane O’Neill was on standby for the Battaash ride.

But trainer John Gosden said last night any change would not alter his intention to watch the race from his Newmarket base, rather than travel to France to saddle Enable in her bid to win a third Arc. Under current protocols, jockeys must self-isolate for a week and provide two negative Covid-19 tests before they can return to action. That would mean missing the two-day Future Champions meeting at Newmarket next week.

Self-isolation would prevent trainers from attending Book One at Tattersalls sales, which features the cream of the yearling crop and which starts a week today. A BHA spokesman said: ‘We are looking at the protocols with a view to making a submission to Public Health England that they might be adjusted.

‘This may include a full exemption from self-isolation for the purposes of training and competition if a strict testing regime and rigorous travel and separation protocols are adhered to.’

Meanwhile, the prospect of significant rain in the French capital this week has seen Enable regain her place as Arc favourite.

She is a 15-8 shot with Ladbrokes, while concerns that conditions are turning against Aidan O’Brien’s 1,000 Guineas and Oaks winner Love has seen her pushed out to 9-4 from 6-4. German Derby winner In Swoop, a proven performer on soft ground, has been cut to 12-1 from 20-1.