Cindy McCain, the widow of the late Republican Senator John McCain who crossed party lines to endorse President-elect Joe Biden, is reported to be in line to be named the next US ambassador to the United Kingdom.

Cindy McCain, 66, is said to be the frontrunner for the job as a reward for helping deliver the traditionally Republican state of Arizona and its 11 electoral college votes to Biden.

The UK ambassadorship is ‘hers if she wants it,’ a source close to Biden told The Times of London.

‘She delivered Arizona. They know that.’ 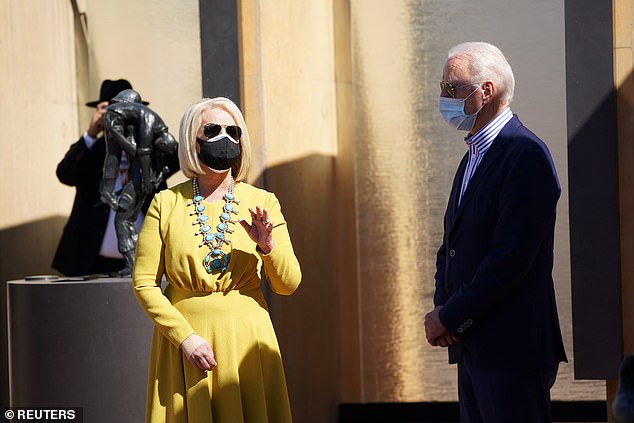 Cindy McCain (left), 66, the widow of the late Senator John McCain, is reported to be the frontrunner for the post of US ambassador to the United Kingdom under incoming President-elect Joe Biden. Biden is seen right with Cindy McCain in Phoenix, Arizona, on October 8 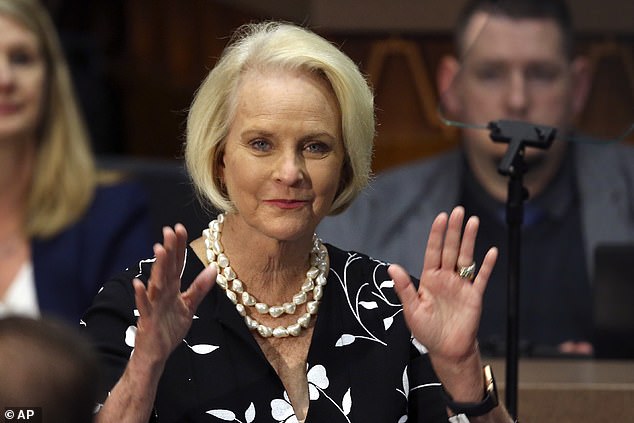 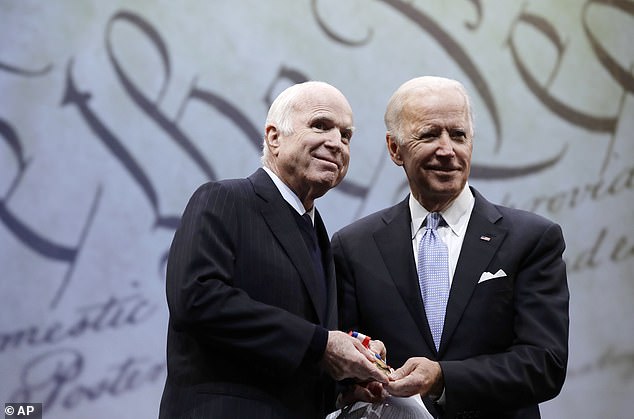 Biden and the McCain family have close ties that go back decades. Then-Senator John McCain is seen left alongside the former vice president in Philadelphia in October 2017

Political observers think the president’s personal vendetta against John McCain may have alienated enough Republicans to the point where they cast their ballots for Biden.

The last time a Democrat won Arizona was in 1992, when Bill Clinton managed to get 46 per cent of the vote. That year, he was running against Republican Senator Bob Dole and a strong third-party candidate, Texas billionaire Ross Perot.

It is unclear if Cindy McCain, who is said to be an Anglophile, even wants the job.

Since her husband’s passing, she has focused on charitable and philanthropic endeavors.

Cindy McCain also serves as chair of the board of trustees of the McCain Institute for International Leadership at Arizona State University.

DailyMail.com has sought comment from both Cindy McCain as well as the Biden-Harris transition team.

The ambassadorship to London is considered one of the most sought-after positions in the United States Foreign Service, though it is often given to political allies who help the president win election. 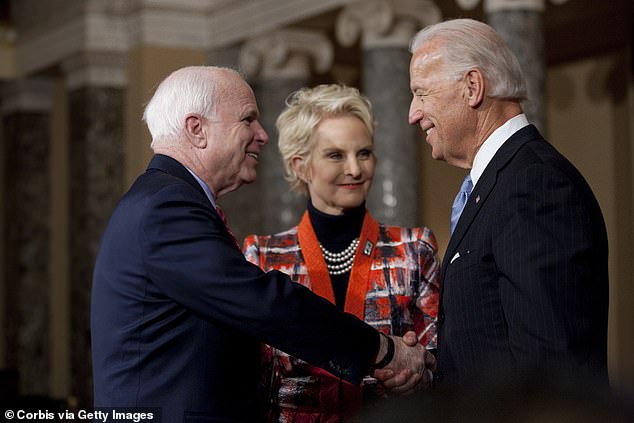 From left: Then-Senator John McCain, Cindy McCain, and then-Vice President Joe Biden are seen on Capitol Hill in this 2011 photo

America’s current minister to the Court of St. James is Robert Wood Johnson IV, a Trump appointee and longtime Republican Party donor who is also the heir to the Johnson & Johnson pharmaceutical fortune.

Cindy McCain’s possible entry into the incoming Biden administration would be a fitting culmination of a years-long feud between her family and President Trump.

The outgoing Republican president drew the ire of the late Senator John McCain by mocking his status as a former prisoner of war who fell into North Vietnamese captivity during the Vietnam conflict.

John McCain was a pilot in the United States Navy when his plane was shot down over Hanoi in 1967. After the North Vietnamese captors learned his father was a senior military officer, they offered him early release, but he refused.

Trump infamously said that John McCain was not ‘a war hero because he was captured’ and that he preferred ‘people that weren’t captured.’

John McCain further angered Trump when he cast the deciding vote that sunk his own party’s efforts to repeal Obamacare in July 2017.

The senator from Arizona, who was diagnosed with a malignant brain tumor, died in August 2018. He was 81 years old.

The McCain family explicitly requested that the president not attend the late senator’s funeral.

John McCain is also said to have asked his former political rivals – former Presidents Barack Obama and George W. Bush – to deliver the eulogies at his funeral.

It was Obama and Bush who both denied McCain a chance to become president – Obama in 2008 and Bush in 2000, when he defeated the senator who had mounted an underdog campaign for the GOP nomination. 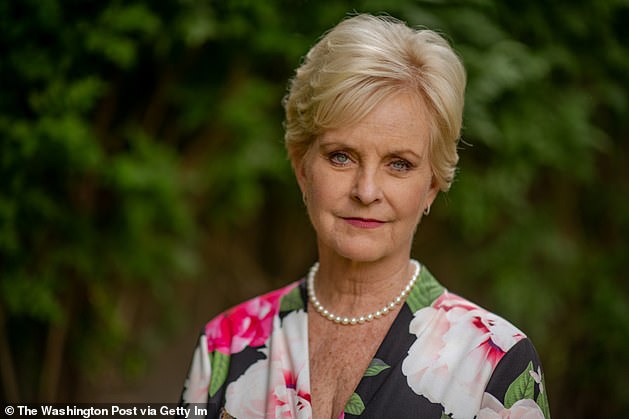 Cindy McCain spoke in a video that aired at the Democratic National Convention, talking about Joe Biden’s friendship with her late husband John McCain 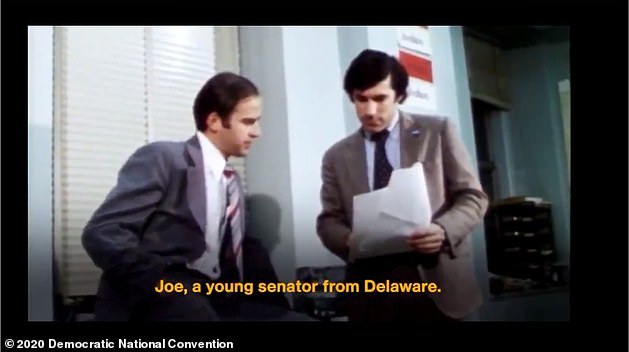 Biden, a longtime friend of McCain’s, was the vice president on the Obama ticket.

Just days after Biden was declared the projected winner of the presidential election by news media outlets, Cindy McCain was given an advisory board role for his transition team.

In an interview with Good Morning America after Biden’s victory, Cindy celebrated the election results and told Republicans: ‘It’s time not just for Americans to get together and work together, but most importantly, it’s time that we Republicans put country first, not party.’

She also requested Trump concede to Biden in a ‘gracious manner’ like her late husband did upon his 2008 election defeat.

Trump has refused to concede, and has insisted, without evidence, that Democrats have tried to steal the election with rampant voter fraud.

Cindy McCain is the second Republican to join the transition team, following in the footsteps of Bob McDonald, who also served as the Secretary of Veteran Affairs for several years under Obama.

McCain is a businesswoman and philanthropist in her own right and will advise the transition team on issues facing women and children.

The advisory board has already met once and will meet again some time in the next few weeks.

McCain’s inclusion on the transition team marks the continuation of a fruitful alliance between her and Biden.

She was one of the most outspoken Republicans to endorse Biden in his race against Trump.

‘My husband John lived by a code: country first. We are Republicans, yes, but Americans foremost. There’s only one candidate in this race who stands up for our values as a nation, and that is @JoeBiden,’ McCain stated in her Twitter endorsement in September.

She also participated in the Democratic National Convention in August, where she lauded the positive relationship between her late husband and Biden.