Well, that’s scuppered my plans for Christmas. I knew there would be a limit to the number of people I could invite, so I came up with the ripping wheeze of inviting the virus instead of the relatives.

All of it. No problem with the seating plan. Some scientists have calculated that the amount of Covid-19 virus in the world is so small you could fit it all into a large spoon.

But now I can’t do it because the Prime Minister told the nation this week that the virus ‘doesn’t know it’s Christmas’. Who’d have thought it? 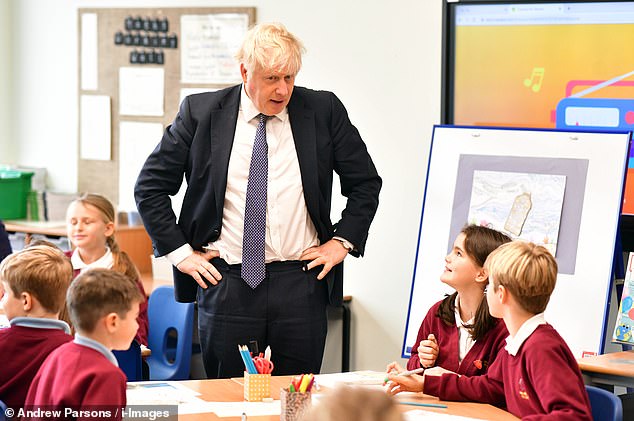 From day one of the pandemic the Government and Boris Johnson has failed to treat us as responsible adults. Instead we have been infantilised.

I know I’m being silly but there’s a serious question here. Isn’t it time Boris Johnson stopped treating us like children?

It’s not hard to see why he does it. His harsher critics would say it’s pretty much all he’s good at — hence the scorn he’s been attracting with his latest restrictions.

It’s certainly true that he made the most of it in his previous incarnation as a journalist. He has also studied Winston Churchill, of whom U.S. President John F. Kennedy once said: ‘He mobilised the English language and sent it into battle.’

More from John Humphrys on Saturday…

In the darkest days of the war, Churchill told the British people that all he could offer them was ‘blood, toil, tears and sweat’. No boosterism there. Just the harsh, brutal truth.

The charge against Johnson is that he’s all boosterism and no battle. He makes a lot of empty promises and treats us like idiots. Or like children who have to be jollied along.

What he should be doing is treating us like responsible adults and simply giving it to us straight.

When the graph showed infections rising steeply in the spring, he vowed to ‘flatten the sombrero’. After that, he would ‘send the coronavirus packing’.

In May, he promised a ‘world-beating’ track-and-trace system would be up and running by June.

Ever wondered what became of that? Or his assurance that a second lockdown was a ‘nuclear deterrent’ that would never be needed? 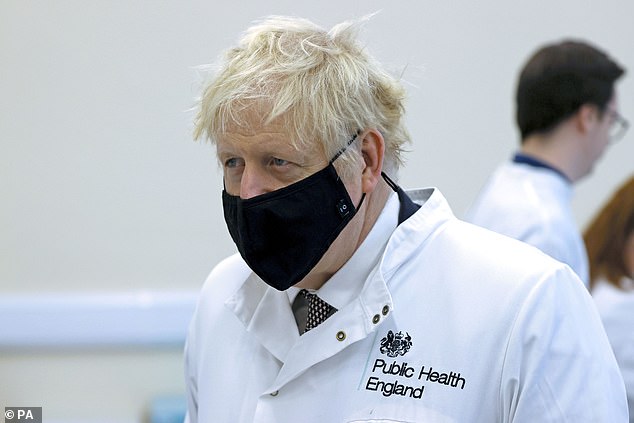 In May, Boris Johnson, pictured, promised a ‘world-beating track-and-trace system’

Now he’s telling us we must avoid ‘taking our foot off the beast’.

Boosterism would be just fine if all it resulted in were a knowing smile and a ‘there goes good old Boris again’. But chickens have a habit of coming home to roost.

From day one of the pandemic the Government has failed to treat us as responsible adults. Instead we have been infantilised.

In the words of the eminent academic Professor Sir David Spiegelhalter of Cambridge University, the Government has been developing a track record of using ‘spurious’ data to frighten us into acquiescing to the restrictive policies it was imposing rather than genuinely informing us.

You might say that doesn’t matter so long as the end result is that we do what we are told. But it does. Fear is what parents sometimes use when they’re trying to get children to do something they don’t want to do. 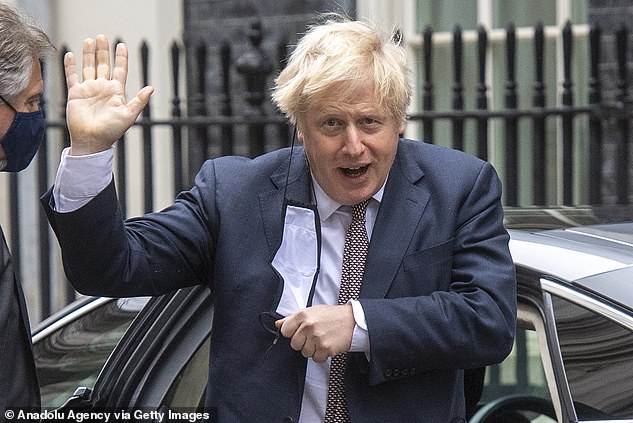 The charge against Johnson is that he’s all boosterism and no battle. He makes a lot of empty promises and treats us like idiots. Or like children who have to be jollied along

It’s justifiable on the basis that children have not yet learned what the prudent action might be in the face of danger — and no one is denying that Covid-19 is dangerous. So if it takes a few dodgy statistics to scare us into doing the right thing, why not?

Quite simply because if we are treated by those in power like children, we behave like children. We become dependent. We stop seeing ourselves as responsible adults who make our own decisions and must live with the consequences. We stop questioning.

I’ve had to duck through a hole in a fence around my local astro-turf on these dark mornings because the gates have been locked ‘for your own safety’. Really?

Who exactly am I harming by running around an empty astro-turf in the dark? And why shouldn’t some youngsters play football there later in the day?

The harm lies in meekly accepting whatever we are told by those in power, even when we are being fed nonsense.

Remember when our leaders were quoting the ‘experts’ who warned of the possibility that 500,000 might die from Covid-19? You probably do.

Remember the apology offered by Johnson and his ministers for having misled us and scared us half to death? You probably don’t. For the very good reason that it never happened.

Perhaps we should cut them more slack. After all, we don’t know everything we need to about the virus. True, but we do know a lot.

In the words of Sir David there is ‘good data available’. And yet, as he says, at some point the need to ‘instill a certain emotional reaction in people’ seems to take over at ‘really quite a high level of decision-making’.

He was choosing his words carefully.

Another word for ‘certain emotional reaction’ is fear. The greatest fear is always fear of the unknown. So let’s have less of the Boris boosterism and let our leaders treat us like adults.

Hope, faith and charity around my kitchen table

Rishi Sunak’s halo slipped a little this week when he announced a cut in our foreign aid budget. Hardly surprising. It’s a hugely controversial subject.

I got involved in the controversy myself when I wrote an essay for this paper 15 years ago after a trip to sub-Saharan Africa. I had seen — not for the first time — heart-rending poverty. Yet I was making the case that we needed to take another look at this country’s policy on aid.

Many might say we don’t need ‘another look’. Just increase our aid and do it now. Children are dying. And that’s a mighty powerful argument.

When you have seen real suffering, as I have and as my old friend Michael Buerk so memorably did in 1984, no one with a shred of humanity could deny that something must be done. But the reaction from readers of this newspaper to what I wrote was extraordinary.

I had made the familiar case that far too much international aid disappears before it reaches those who need it. Much of it ends up in the Swiss bank accounts of corrupt leaders. Some of it goes to countries such as China with vastly bigger economies than our own.

As for the reputable international charities, great sums are spent on staff salaries, bureaucracy and administration. 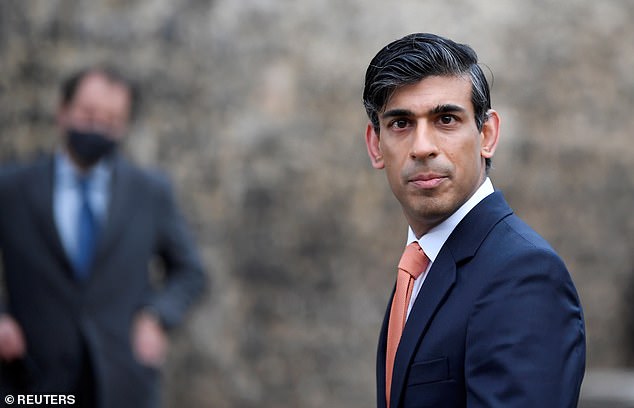 Rishi Sunak’s halo slipped a little this week when he announced a cut in our foreign aid budget. Hardly surprising. It’s a hugely controversial subject

My case was that the most effective way to help the poor was to find a way of giving aid to them directly.

But how? You can’t just fill a fleet of lorries with cash and trundle from village to village hurling out bundles of notes. But what you can do is identify small-scale projects that make a real difference on the ground, where it matters, and fund them. A village where there’s no school. A clinic that has no electricity and no trained midwife. A hospital that needs a surgeon trained in cataract removal. A farming co-operative that needs a decent water supply.

A little factory producing basic wheelchairs for children born so disabled they cannot go to school and their mothers must carry them on their backs everywhere.

So much need. So little cash.

That was on a Saturday. By Monday, a handful of letters arrived from readers. Within days it was a flood. Every one said they loved the idea of charitable donations going directly to the people who could do something good with them, and every other envelope contained cash.

There was one problem. The charity did not exist. So I set it up. I called it the Kitchen Table Charities Trust (KTCT) and by this weekend we will have helped fund 400 different projects.

I have no doubt that the best way to end poverty is through education. Teach a child to read and write and you give that child hope. So that’s where most of the money goes.

I called it the Kitchen Table because we have no offices and those who make it all happen meet once a year around my kitchen table. Their reward is a bowl of my home-made leek and potato soup.

If Rishi wants to join us he’d be welcome. Especially if he brings his cheque book.