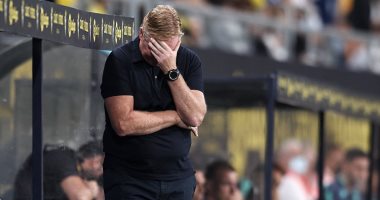 Barcelona coach Ronald Koeman faces the risk of missing the bench in the next two matches in the Spanish League, after he was expelled during the match against Cadiz, which ended in a goalless draw, and was held at the “Ramon de Carranza” stadium, at the end of the sixth round of La Liga. .

Carlos del Cerro, the referee of the Barcelona-Cadiz match, had issued the red card in the face of Koeman in the sixth minute of the match, because of his objection.

According to the Spanish radio “Cadena Coupe”, the coach of the Catalan team is threatened with a two-match ban, and therefore he will miss the leadership of Barca during the matches between Levante and Atletico Madrid. Koeman faces the specter of dismissal from Barcelona training, in light of the decline in the team’s results in the recent period.

The first half of the meeting came at a poor level on the part of the two teams, which did not witness any chance on the goal from the two sides, and the control of the ball was from Barcelona, ​​​​without a danger to the Kadesh goal.

The result remained the same in the second half, which saw the expulsion of the Catalan midfielder, Dutchman Frenkie de Jong in the 65th minute, after receiving a second yellow card.

Barcelona raised its score to the ninth point in seventh place, while Kadesh’s balance rose to the sixth point in the fourteenth place, and Real Madrid leads with 16 points, after its big victory over Real Mallorca 6-1 yesterday, Wednesday.

Barcelona stumbled against Granada in the last round of La Liga, where they tied 1-1 amid fierce criticism from the Blaugrana fans, objecting to the technical level of the Catalan team, and the continuation of Dutch coach Ronald Koeman.

The Catalan team was absent from tonight’s match, Jordi Alba, Pedri, Braithwaite, Ansu Fati, Dembele, and Aguero, due to injury.

An Environment of Fear Is Building, Says US Charge d'Affaires in El Salvador | Video