Last minute of the war in Ukraine, live | The EU will approve 500 million more to help Ukraine with heavy weapons | International 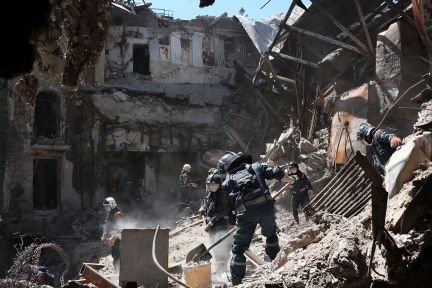 On the 79th day of the war initiated by Russia against Ukraine, these are the key data at 8:00 a.m. this Friday, May 13:

Russia reduces the shipment of gas to Europe through Ukraine. Russia’s Gazprom – controlled by Moscow, which has a monopoly on gas pipelines and Russian gas sent to Europe – has announced that it will reduce supplies to Europe this Friday through the Sudzha station in Ukraine. The shipment of gas will go from 65.7 million cubic meters to 60.8 million.

The President of the European Council warns that “world security is threatened”. The President of the European Council, Charles Michel, has assured this Friday that world security is threatened both by Russia and by the latest missile tests carried out by North Korea. “Russia, a nuclear-armed power, a permanent member of the UN Security Council, is attacking the sovereign nation of Ukraine while making shameful and unacceptable references to the use of nuclear weapons,” said Michel after visiting the Peace Museum in Ukraine. Hiroshima.

Zelensky assures that Russia has destroyed 570 medical centers since the beginning of the invasion. Ukrainian President Volodymyr Zelensky said Thursday that the Russian army has destroyed 570 medical centers since the start of the war on February 24. Among them, 101 hospitals. “It’s barbaric,” the president declared in a video message. Zelensky has also pointed out that Kremlin troops have fired missiles at schools in the Chernihiv region.

Ukraine claims to have set fire to a Russian ship in the Black Sea. The military authorities of Odessa have affirmed this Thursday that their forces have damaged a logistics ship of the Russian Navy, the Vsevolod DobrodAnd they set it on fire. In a publication on the internet, the spokesman for the military region, Sergei Bratchuk, maintains that the ship had been attacked near the island of Serpents, south of Odessa and in the vicinity of the Romanian maritime border, where in recent days Russian and Ukrainian forces have exchanged attacks.

kyiv has spent 8 billion euros on the war. Ukraine has spent 245.1 billion hryvnias (8 billion euros) on the war with Russia since the February 24 invasion, Finance Minister Sergei Marchenko announced on Thursday. The figure, which had not been revealed before, lays bare the economic storm facing the country as its soldiers try to contain the Russian offensive.

In the picture, of APa building destroyed by Russian strikes in Mariupol, in southeastern Ukraine, on Thursday.

PlayOffs NBA 2022: The death of the ‘Process’: not even ‘Batman’ Embiid could save them

PlayOffs NBA 2022: The death of the 'Process': not even 'Batman' Embiid could save them