Last minute of the war in Ukraine, live | Von der Leyen and Borrell travel to kyiv to meet with Zelensky | International 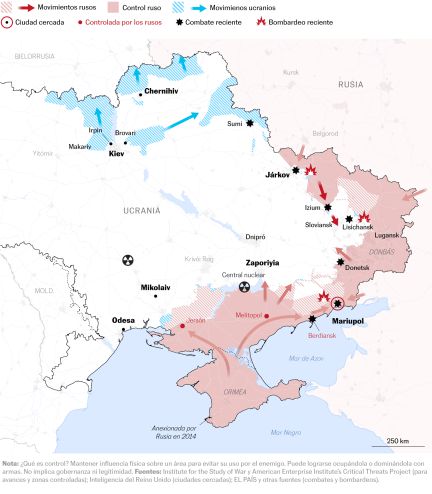 Western Ukraine is virtually free of Russian troops, as is the Sumi area in the northeast, which the Ukrainians claim to have under their control. The war has moved entirely to the south and especially to the east of the country: the Russians are concentrating their forces here, according to the Institute for the Study of War (ISW), with the aim of launching a major offensive in the regions of Donetsk and Luhansk, in Donbas. It is an area where the Ukrainian authorities have been insisting for days that residents leave their homes in the face of imminent attacks.

The most important fighting, for the moment, is taking place around Izium, in the southeast of the Kharkov region, which the Russians seem to have controlled since April 1. Without seizing the axis between Izium and Sloviansk, stresses the ISW, it will be difficult to guarantee control of the Donetsk and Luhansk regions. This area would serve to surround the Ukrainian troops that remain in the east of the country.

What is not clear, according to British intelligence, is how and for how long the Kremlin will be able to reorganize its forces. As the ISW also agrees, much logistical and strategic support will be required before they can be deployed again to support the invasion of the eastern part of the country. Further north on this same front, the Russians have apparently bombed civilian infrastructure on the outskirts of Kharkov and are trying to block the remaining Ukrainian forces here from supporting military operations in Izium.

In the south, Vladimir Putin’s troops are expected to group more forces in Donbas in the coming days, always with a view to reinforcing their offensive in the southeast. Meanwhile, they continue to gain ground in Mariupol, a city that in fact they claim to already have under control: the Ukrainians, however, seem to be still resisting in the southwest of the town, where the large local port is located.

See here the updated maps of the conflict

Life expectancy in the US continues to decline, according to a new study

NBA: The Lakers begin their cleanup after their failure with a first dismissal: Anthony Davis does not believe they will transfer him

On Tuesday, Trump-endorsed Senate candidate and celebrity Mehmet Oz will take on a slew of Republican competitors In Pennsylvania. If he wins, it's another notch in the belt...

NBA: The Lakers begin their cleanup after their failure with a first dismissal: Anthony Davis does not believe they will transfer him