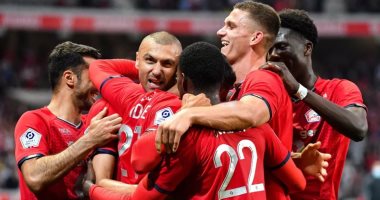 Lille, the defending champion, regained its lost balance since the start of the season in the “Ligue A” with a difficult victory over Stade Reims with two goals to one today, Wednesday, in the framework of the seventh round of matches in the French first division football.

At the Pierre Mauroy stadium, Lille scored the two winning goals in the first half with the signing of young Canadian Jonathan David and Benjamin Andre in the 31st and 43rd minutes, respectively.

While Alexis Phillips scored the goal of reducing the difference for the visitors from a penalty kick in the 74th minute.

With this result, the defending champion regains the taste of victories, adding his second victory, after two consecutive losses, to raise his score to 8 points, temporarily occupying 13th place.

While Reims suffered his second loss this season, his tally remained at 7 points, in the 15th place temporarily.

Likewise, Monaco regained the tone of victories by defeating its guest Saint-Etienne (3-1) at the (Louis II) stadium.

After two successive stumbles with a loss and a draw, the emirate team returned to the path of victories, its second victory in the season, raising its score to 8 points in 12th place.

As for Saint-Etienne, it lost its fourth consecutive loss, and failed to achieve any victory since the beginning of the season, to freeze its balance at 3 points (collected from 3 draws only) in the 19th and penultimate place temporarily.

The 3-3, positive tie was overshadowed by the exciting match in which Bordeaux hosted Montpellier at the Stade de la Mausson.

In this way, the two teams shared the point of the meeting, bringing the balance of Montpellier to 9 points, temporarily occupying seventh place, knowing that it is the team’s second draw in a row, the third this season.

For his part, Nantes continued his series of awakening with a second victory in a row, this time with a score of 3-1 over his guest, Brest.

Nantes now has 10 points, collected from 3 victories, a draw and 3 losses, to occupy the sixth place temporarily, while Brest’s balance is frozen at 4 points, in which it is in the eighteenth place, knowing that it has not achieved any victory so far in the season.

Newcomer Clermont fell hard off base with a clean six off base at the hands of Stade Rennes.

Rennes stopped his series of losses during the past three rounds, to achieve his second victory this season, raising his score to 8 points in tenth place.

While Clermont suffered its second loss this season, its score stopped at 9 points in ninth place.