Earlier on Tuesday, the court was told the County Louth woman, 39, ‘enveloped herself in the black flag’ of the so-called Islamic State, as she pleaded not guilty to charges of membership of the illegal organisation.

She is also accused of providing funds to benefit the group. She denies the charges.

Smith left the Irish military in 2011 after she converted to Islam, before travelling to a IS-controlled region in Syria where she married Sajid Aslam, the court heard.

The prosecution says her husband, a UK national, carried out ‘border patrol’ work for ISIS, and that he ‘had done a snipers course on her advice.’

Sean Gillane SC, for the prosecution, said that the accused’s conduct during the period between 2015 and 2019 when she travelled to Syria could ‘prove membership’ of the terror organisation.

He said the court would hear evidence that Smith had taken part in ‘hijrah’, or migration to territories controlled by the Islamic State. 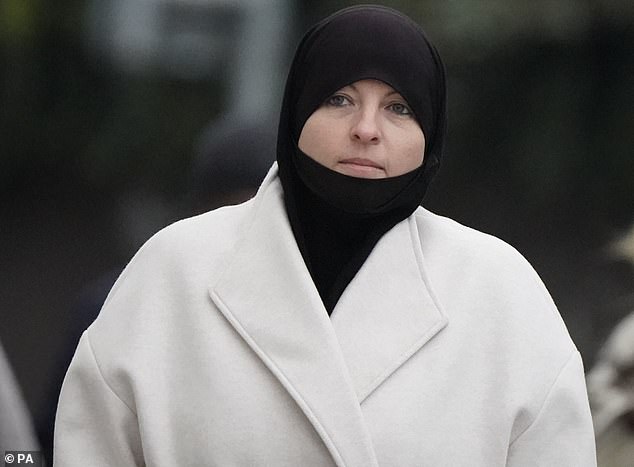 Lisa Smith, 39, is pictured outside of the Special Criminal Court in Dublin on Tuesday as she faces multiple terror-related charges

‘Hijrah in this context is a central act of allegiance to this proto-State, without which the organisation cannot survive. It is the very lifeblood of the Islamic State,’ Mr Gillane told the court.

‘IS needed fighters but also those who could give sustenance and vitality to the group.’

He said that participation in that act of hijrah was to ‘self-identify as a member’ of the organisation.

Mr Gillane added: ‘There is no duality or split between a good Islamic State and a bad one, into which one might fall through happenstance or misfortune.’

He said the evidence would show that Smith willingly remained in Syria, married there and that her movements mirrored that of the terror group when they lost territories in the region.

He also spoke about her ‘joy’ at being in Syria, that she had ‘wanted jihad’, that she had a desire to live under Sharia law and had a ‘willingness to die as a martyr’. 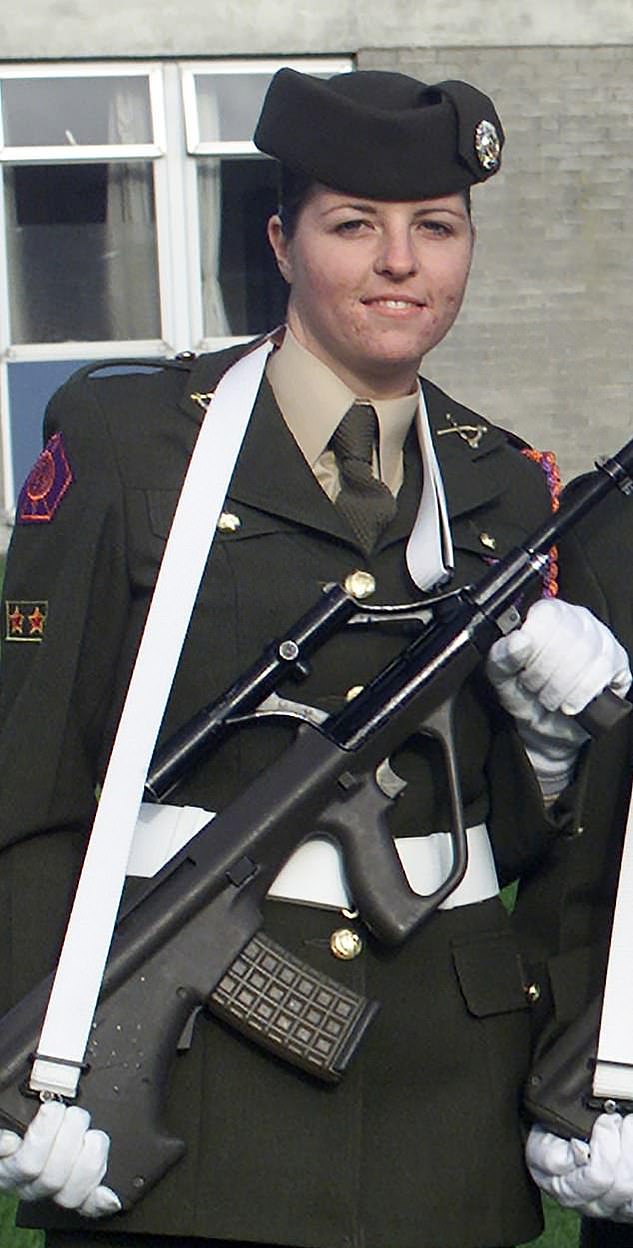 Smith, a former Air Corps soldier who worked on the Government jet, has been accused of being an Islamic State member and financing terrorism

The prosecutor said there was a ‘reciprocity’ to Ms Smith’s allegiance to IS, in that she had received ‘protection’ while in the region.

‘Ms Smith specifically addressed, assessed and answered the call to migrate to territory controlled by IS,’ Mr Gillane said.

‘Every inch of that territory was won by a targeted campaign of violence.’

Mr Gillane said the evidence would show that Smith was part of a Telegram group in June 2015 that discussed a video by the Islamic State showing the drowning of five men in a cage.

He said the members discussed why they had been drowned, with Smith responding: ‘OK, I understand why they were drowned. I didn’t know half of the story.’

The court heard that the accused had begun her trip to Syria in October 2015, and that she had lied to family members about her destination.

Smith bought a one-way ticket from Dublin to Istanbul, which was paid for in cash, the court heard.

From there, she crossed the border into Syria and IS-controlled territory.

When she arrived, she was instructed to change the security settings on her phone, and to join another group on the private messaging service Telegram, the court was told. 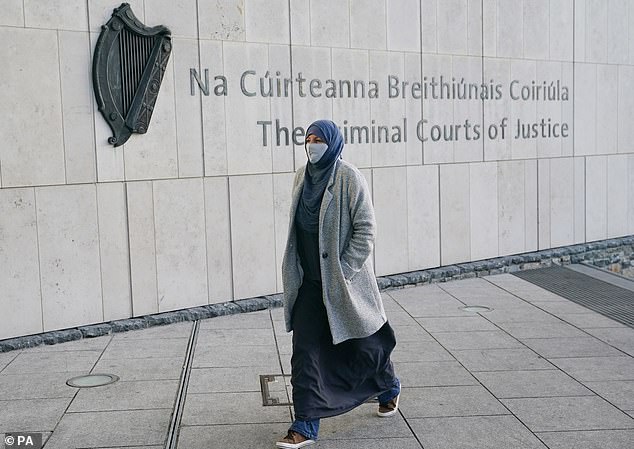 The court heard that Smith (pictured) began her one-way trip from Dublin to Istanbul to Syria in October 2015, and that she had lied to family members about her destination

Around this time, Smith ‘made clear to her family her desire to stay’, the court heard.

On Tuesday the court heard from the first witness, Una McCartney, from Dundalk, a friend of Smith’s for between 15 and 20 years.

She told the court that she and Smith had had plenty of discussions about religion around the time of her conversion to Islam around 2007.

Ms McCartney described them as ‘normal discussions’ regarding different beliefs in Catholicism and Islam.

She said Smith had discussed moving to a Muslim country because she wanted to be ‘surrounded by people who were the same faith as her’, but said she did not recall Smith stating any intention to travel to Syria.

Under cross-examination by Michael O’Higgins SC for the defence, Ms McCartney said Smith has a troubled background. 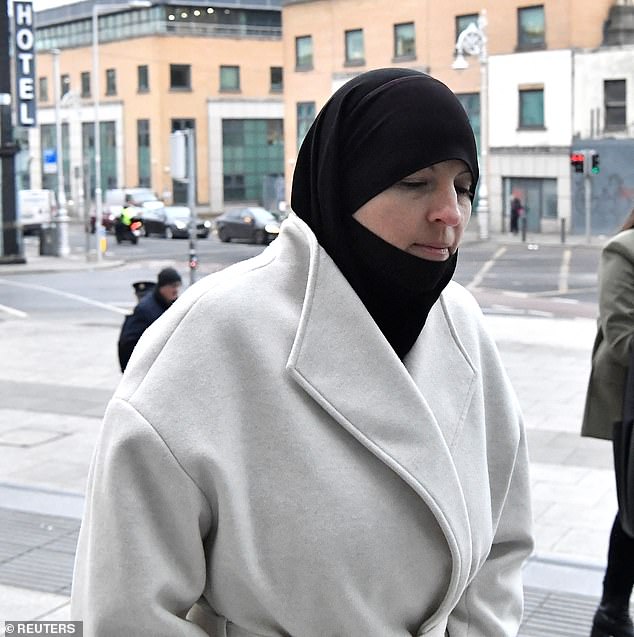 On Tuesday the court heard from the first witness, Una McCartney, from Dundalk, a friend of Smith’s for between 15 and 20 years. She told the court that she and Smith had had plenty of discussions about religion around the time of her conversion to Islam around 2007

‘I don’t think her home life growing up was too great. Her dad was an alcoholic, I think he probably was a bit violent,’ she told the court.

‘We all enjoyed drinking, partying, myself included. We were probably a bit wild.’

The witness told the court that she believed Smith’s interest in Islam would ‘fizzle out’ over time.

Ms McCartney agreed with Mr O’Higgins that the accused had been ‘vulnerable’ at the time.

‘My impression was she needed help or counselling. She had burned bridges with some of her friends,’ the witness said. 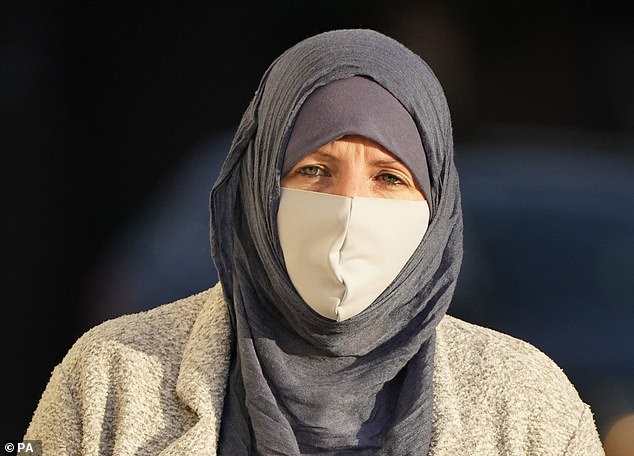 The case received widespread attention in 2019 when it emerged that Smith (above), a former Air Corps soldier who had worked on the Government jet, had been detained in Syria over alleged links to IS

Ms McCartney said the accused may have turned to Islam to find some solace.

She recalled her Garda interview in which she described Smith as ‘very naive and easily taken in by somebody promising her something’.

The case received widespread attention in 2019 when it emerged that Smith, a former Air Corps soldier who had worked on the Government jet, had been detained in Syria over alleged links to IS.

Smith was arrested at Dublin Airport in 2019 on suspicion of terrorist offences after returning from Turkey in November with her young daughter.

She had travelled to Syria a number of years ago after she converted to Islam.

Smith is charged under Section Six of the Criminal Justice (Terrorist Offences) Act 2005 which makes it an offence to join a foreign unlawful organisation.

It is alleged that between October 28 2015 and December 1 2019 at a location outside the State, she was a member of a terrorist group styling itself as the Islamic State.

She has also been accused of financing terrorism by sending 800 euro in assistance by Western Union money transfer to a named individual in 2015.

Smith has denied the charges.

‘It Could Have Been Bad’: Capitol Police Officer Eugene Goodman Breaks Silence On Jan. 6 Attack