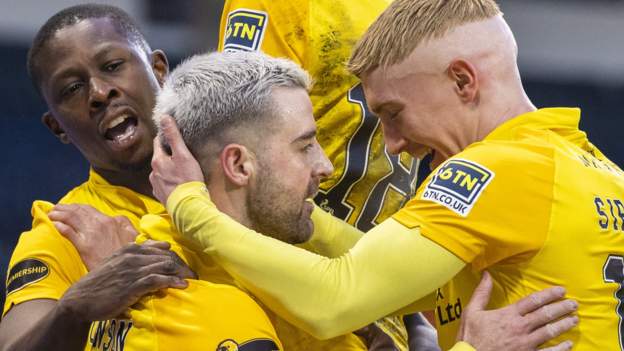 Livingston survived a late bombardment to edge past St Mirren at Hampden and set up a Scottish League Cup final against St Johnstone.

But Livingston clung on to secure a return to Hampden on 28 February.

Martindale’s midas touch shows no signs of fading, with the head coach’s ninth win the most precious of his embryonic tenure.

Livingston’s only previous silverware came in this competition in 2004 and they hadn’t featured in a semi-final for 15 years. But recent form favoured Martindale’s men in this all-Premiership tie and they wasted no time in asserting themselves.

Jon Gurthrie and Josh Mullin both registered shots on target in a frantic start before static St Mirren defending was exposed as the breakthrough arrived.

Robinson was both creator and scorer, initially flicking on a deep free-kick inside the box to Efe Ambrose. When the defender nodded against the crossbar, Robinson’s attentiveness in following up was rewarded with a simple headed finish.

Eamonn Brophy dragged wide from distance as St Mirren tried to muster a response. But the striker was an isolated presence as Jim Goodwin’s men struggled for a first-half foothold while showing no hint of the performance that had claimed Rangers’ scalp in the previous round.

Even the big calls weren’t going St Mirren’s way. They should have been given a penalty when Devlin clattered Shaughnessy on the calf in an attempted clearance, but referee David Munro ignored the appeals. He did likewise after the break when substitute Job Obika tumbled under minimal contact from Julien Serrano.

Devlin should have doubled Livingston’s lead shortly after half-time, slicing a Mullin delivery over the bar. The let-off finally jolted St Mirren to life as Conor McCarthy’s header from a corner was cleared off the goalline by Craig Sibbald, before a dipping Aaron Connolly effort had to be helped over bar by goalkeeper Max Stryjek.

Brophy also sent a header too high as Livingston, having been so comfortable, were pinned back in the closing stages.

Perhaps the best chance for an equaliser fell to Obika from a Kyle McAllister cross, but the striker got him timing all wrong and his attempted header bounced off his shoulder and trickled to Stryjek.

Still Goodwin’s men kept coming, and still Livingston refused to buckle. Shaughnessy sent a header agonisingly wide from a corner before Obika’s drive deflected into the side-netting as St Mirren’s hopes of a first final since lifting the trophy in 2013 evaporated in the freezing Hampden air.

Man of the match – Scott Robinson

This was the acid test of Martindale’s capabilities – and his side did him proud. Livingston have played better during their current sparkling run, but this was a gusty, committed performance from a team pushed to the limit.

With Martindale’s Scottish FA ‘fit and proper person’ hearing looming on Tuesday, where he will learn if he can continue in the role after a previous stint in jail, the rehabilitated Livingston leader is fast becoming a real credit to the Scottish game.

St Mirren, meanwhile, can bow out with heads held high. Their jarring regret will be the meek first-half showing that allowed Livingston to wrest control.

They can’t afford to wallow in disappointment, though, with a fist top-half finish in the Premiership since 1985 now the target in the remainder of the season.

What we know about EVgo's IPO plans

US election: Meet five new faces making political history in the US

Ubisoft Moving Away From Reliance on AAA Releases