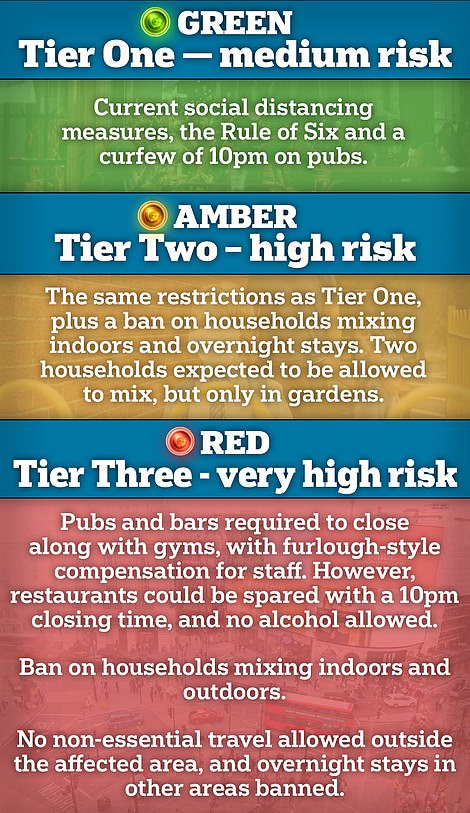 London is set to be thrust into a ‘Tier Two’ lockdown with the city’s 9million residents banned from seeing their friends and family indoors within days — as Boris Johnson prepares to stop households mixing, while still keeping pubs, restaurants and gyms open.

The capital is expected to be hurled into the high-risk category of the tougher ‘traffic-light’ restrictions drawn up by Number 10 to try and stem the spread of Covid-19, if the outbreak continues to spiral. Official statistics show London’s infection rate — the number of weekly cases per 100,000 people — has doubled in a fortnight.

The restrictions will prohibit households from mixing indoors, although up to six from different homes will still be allowed to meet up outside. Health chiefs are also understood to be discussing whether or not to limit travel to ‘only essential’ trips.

The level two tier also sees pubs, restaurants and gyms still permitted to open up their doors. They will still have to obey the current 10pm curfew rules, however.

London mayor Sadiq Khan last week warned tougher lockdown measures in the capital are ‘inevitable’. He warned it was important to curtail the virus’s spread in the city before the pandemic gets to levels ‘we saw in March and April’.

It comes as medical chiefs today sounded a grim warning about the resurgent threat from coronavirus. Hours before the Prime Minister is due to set out a new ‘traffic light’ system of curbs for England, top government advisers were sent out to ‘roll the pitch’ with a stark assessment of the danger.

Deputy chief medical officer Jonathan Van-Tam and NHS medical director Stephen Powis told a briefing in Downing Street that the number of patients in hospital was now higher than before the blanket lockdown was imposed in March – and could be above the previous peak within four weeks.

They delivered a stark warning that the surge in cases was a ‘nationwide phenomenon’, rather than just in the North, and was spreading from younger people to the more vulnerable old generation. 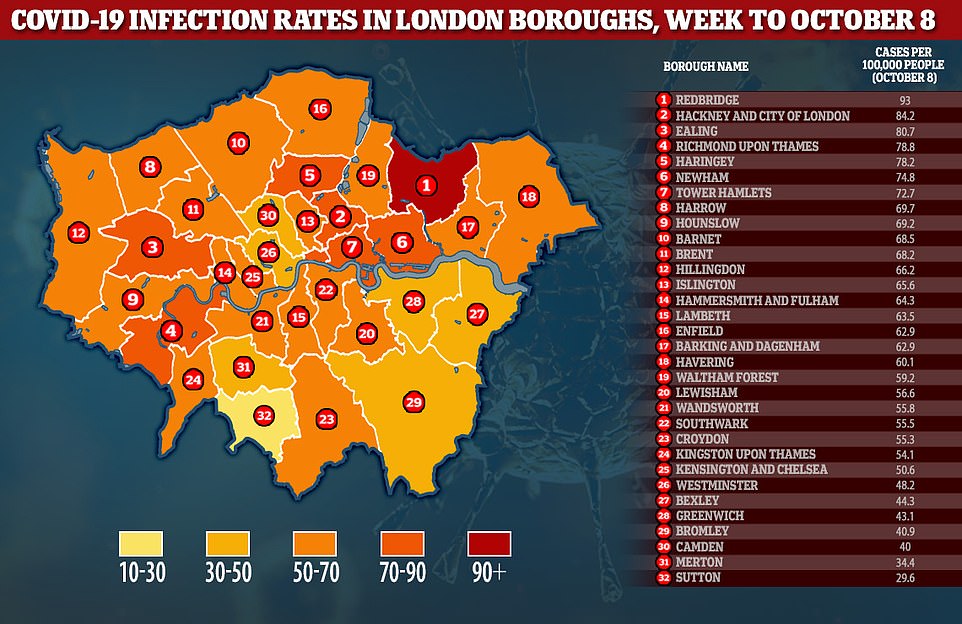 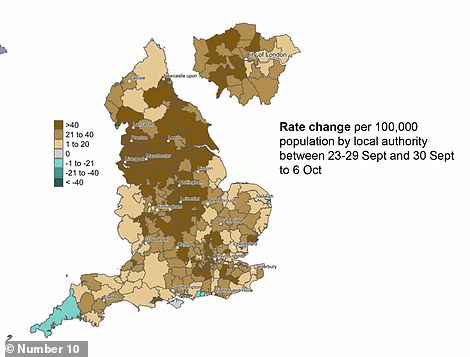 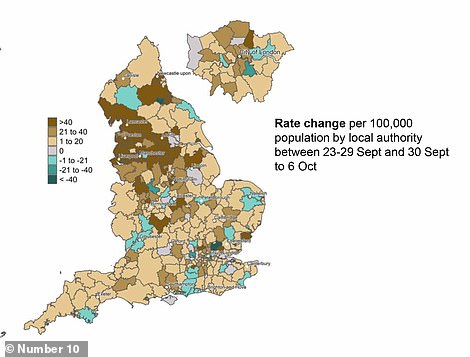 Two graphs wheeled out by Professor Jonathan Van-Tam today showed how quickly outbreaks are growing across England, with dark orange showing the infection rate has risen by at least 40 cases per 100,000 in a week, while dark green shows the opposite. The graph on the left shows the speed of growth for all age groups, while the one on the right is solely for over-60s 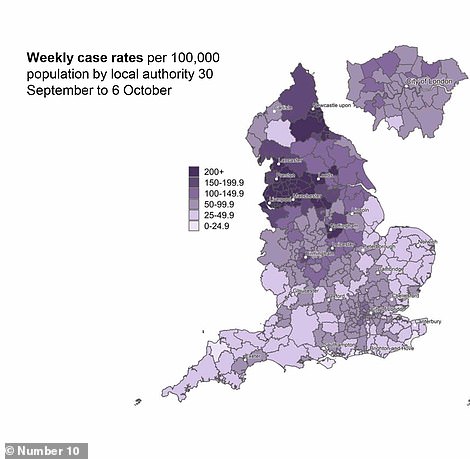 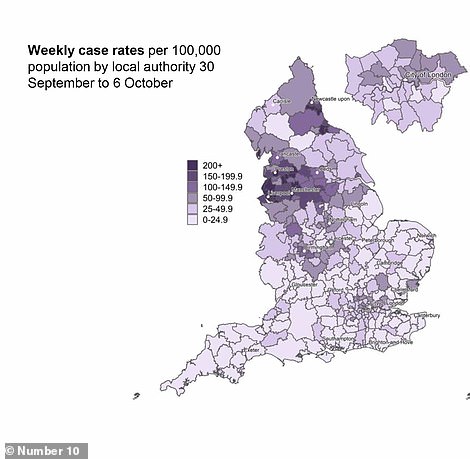 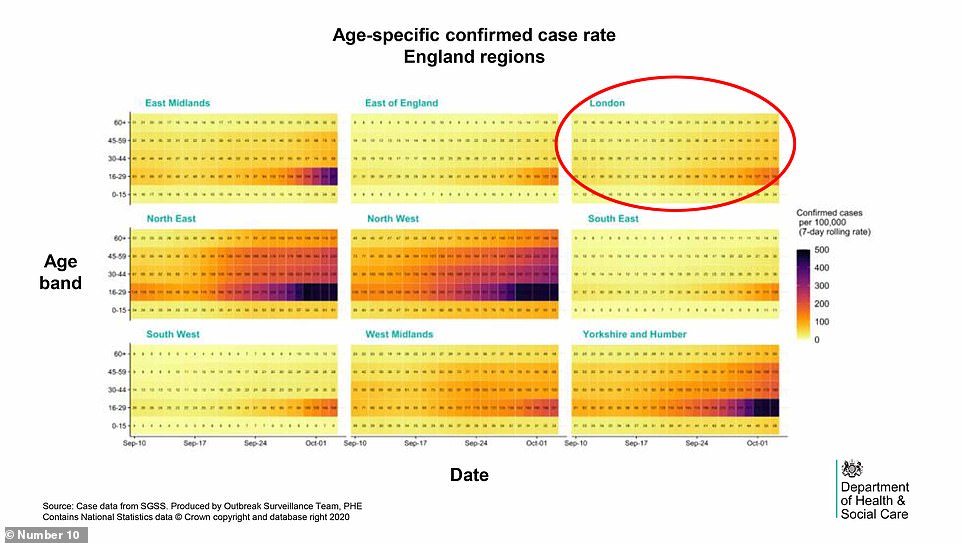 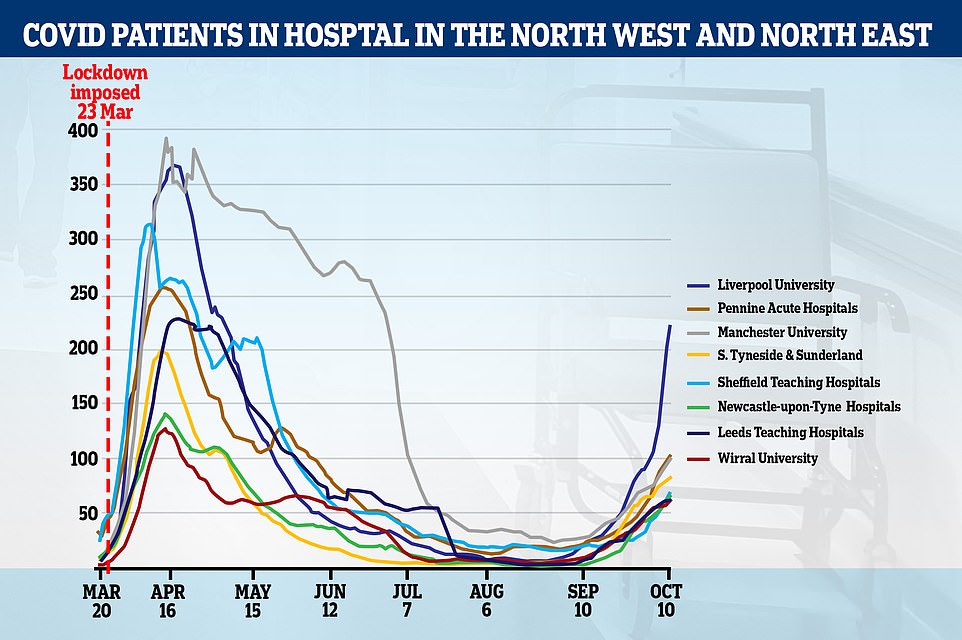 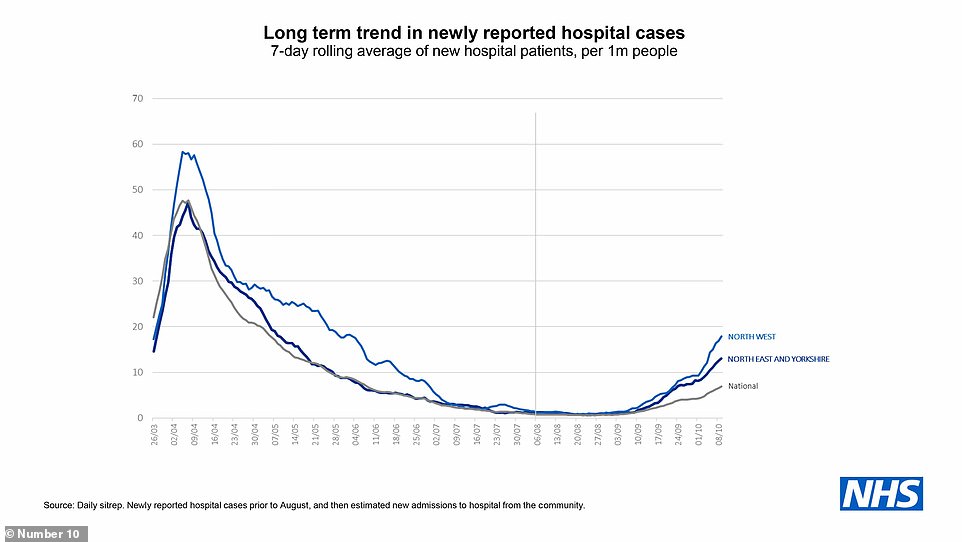 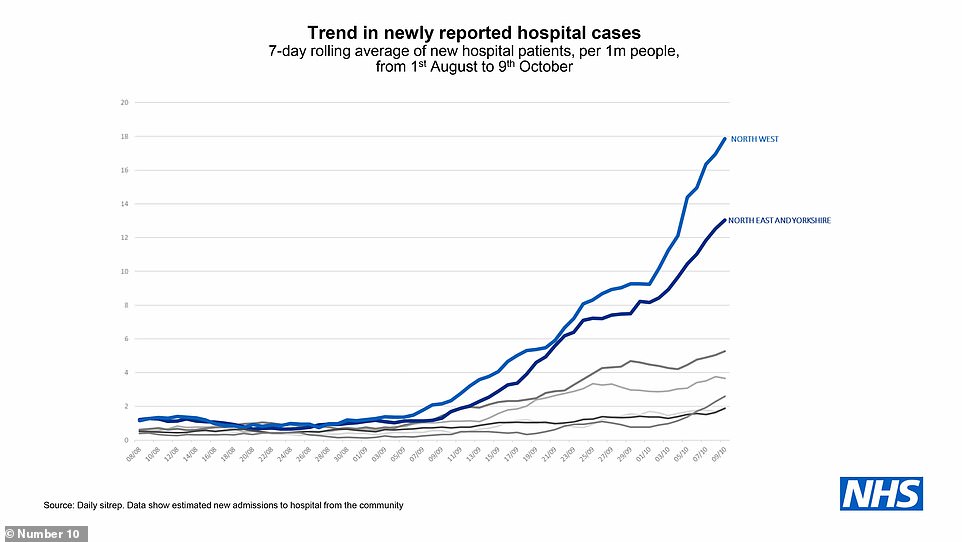 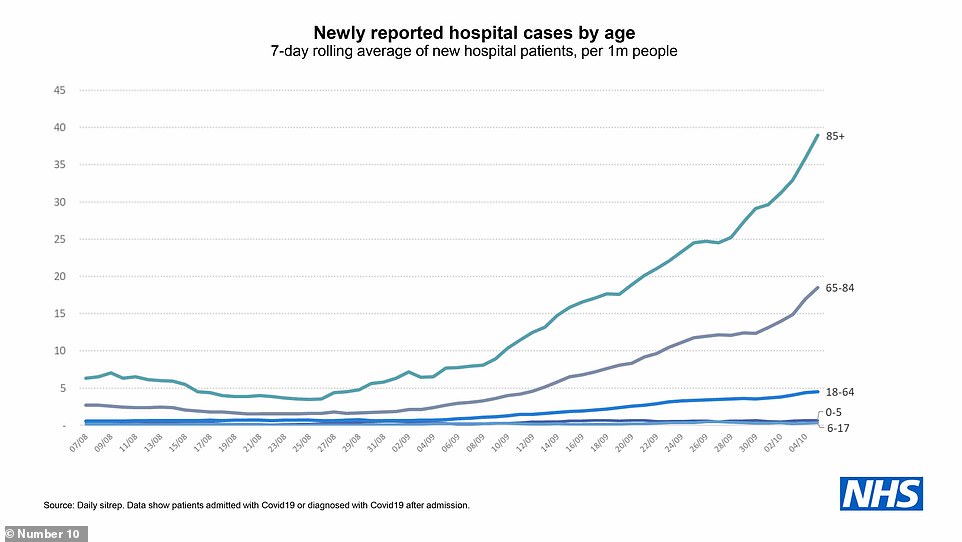 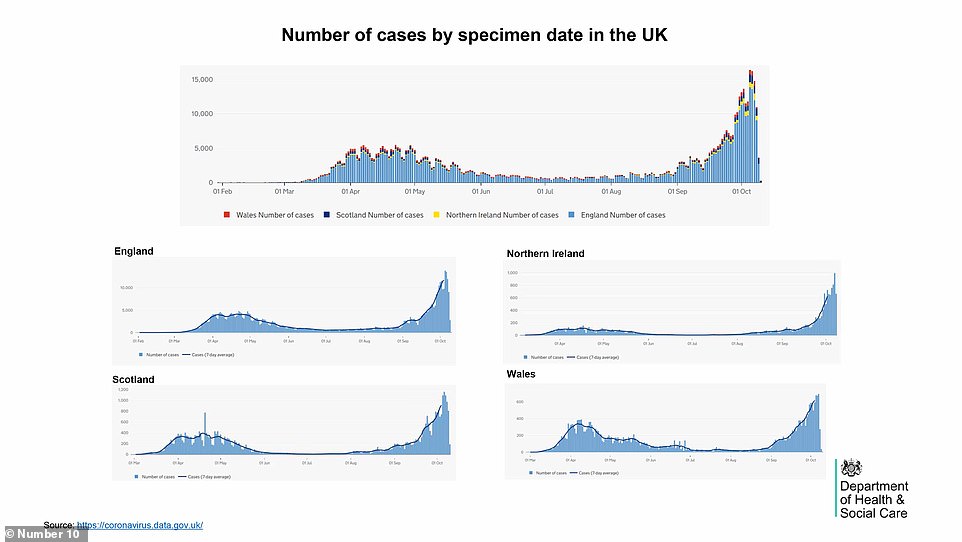 Medical chiefs sounded a grim warning today about the resurgent threat from coronavirus as Boris Johnson prepares to plunge millions of people into even deeper lockdown.

Hours before the PM is due to set out a new ‘traffic light’ system of curbs for England, top government advisers were sent out to ‘roll the pitch’ with a stark assessment of the danger.

Deputy chief medical officer Jonathan Van-Tam and NHS medical director Stephen Powis told a briefing in Downing Street that the number of patients in hospital was now higher than before the blanket lockdown was imposed in March – and could be above the previous peak within four weeks.

Professor Van-Tam also delivered a stark message that the surge in cases was a ‘nationwide phenomenon’ rather than just in the North, and was spreading from younger people to the more vulnerable old generation.

Prof Powys said the hope that the elderly could be isolated from the increase in infections was proving to be ‘wishful thinking’.

Mr Johnson is facing fury as he finally unveils the government’s ‘traffic light’ coronavirus lockdown today – with ministers warning it could last till Christmas.

The PM is defying the wrath of local leaders and Tory MPs to plough ahead with the new system as he desperately struggles to get a grip on surging cases.

Mr Johnson was holding a Cobra emergency meeting this morning to finalise the plan, after a weekend of frantic talks with politicians and scientists. He will then confirm the crackdown in a statement to the Commons, before facing questions at a No10 press conference tonight.

It is understood that Liverpool will feature in ‘Tier Three’, subject to the most draconian restrictions, including shutting pubs and banning households from mixing from 5pm on Wednesday.

Professor Karol Sikora, one of the country’s top oncologists, slammed the way the authorities were allowing the news to trickle out before official announcements, questioning the science for the rules.

He said: ‘I can fully understand the frustration and fury.

‘We’ve got a whole new lockdown system apparently and yet no official word or details from Government.

‘How must pub owners feel in those areas? Reading about their futures on Twitter without the full details. Not good enough.

‘Can we go on like this for months, maybe longer? Arguments about the fundamental strategy aside – this is utter chaos.

‘We all want policies to based on science and data, communicated transparently. That isn’t happening. Trust is easy to lose and very difficult to get back.’

The strictest form of the restrictions – Tier Three – will see pubs, gyms and casinos forced to close and all but essential travel to and from coronavirus hotspots.

Later today Mr Johnson will spell out his three-tier strategy with areas in England labelled as medium, high or very high risk.

Merseyside is expected to be among the areas subjected to Tier 3 restrictions – but there is still disagreement about a financial support package for the area should harsh measures be imposed.

A statement from seven local leaders, including Metro mayor Steve Rotheram and Liverpool Mayor Joe Anderson, said: ‘We made it clear we do not feel that the Furlough scheme announced recently is adequate and that businesses in the region especially those in the hospitality sector and those serving it will be damaged and many will suffer long term damage or close for good.

‘Government made it very, very clear they would not shift and improve the scheme.’

Under the furlough scheme, the government paid 80 per cent of workers’ wages until August, with the scheme winding down until it is closed at the end of the month.

A separate Job Support Scheme, which launches on November 1 and lasts for six months, will involve the Government paying two thirds of each employee’s salary – up to a maximum of £2,100 a month – if their employer is legally required to close their premises because of restrictions.

Mr Rotheram told Channel 4 News: ‘We have a huge number, a disproportionate number, working in the visitor economy who are on less than £9 an hour. 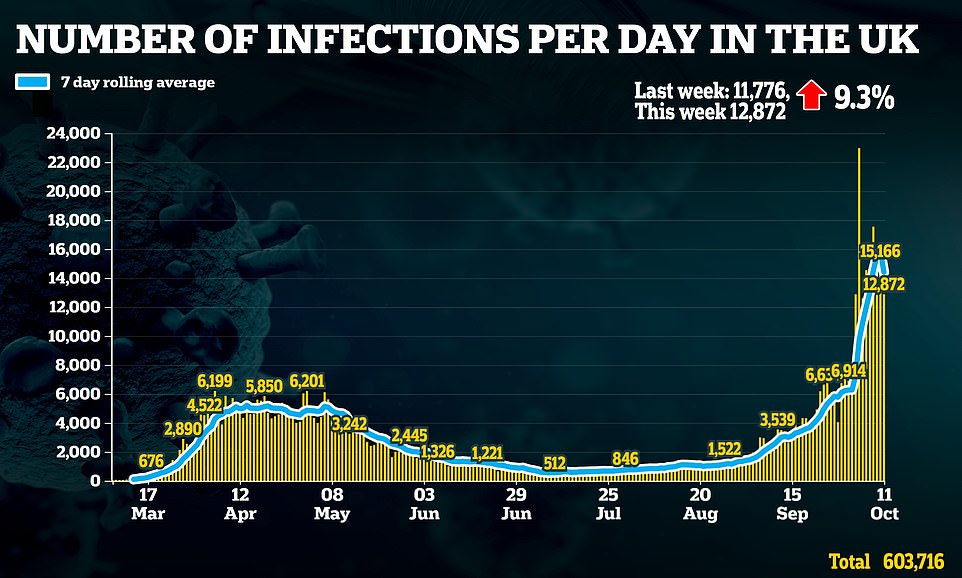 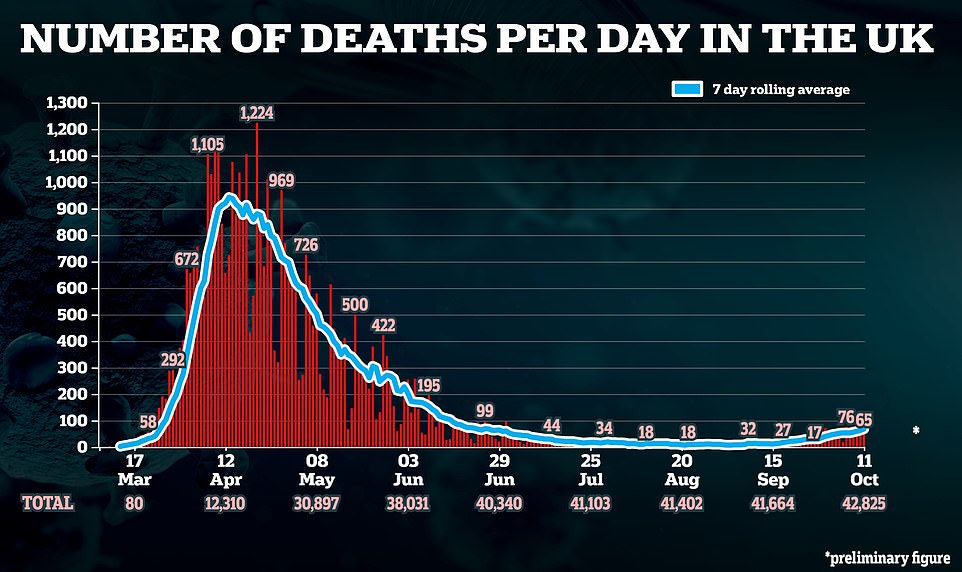 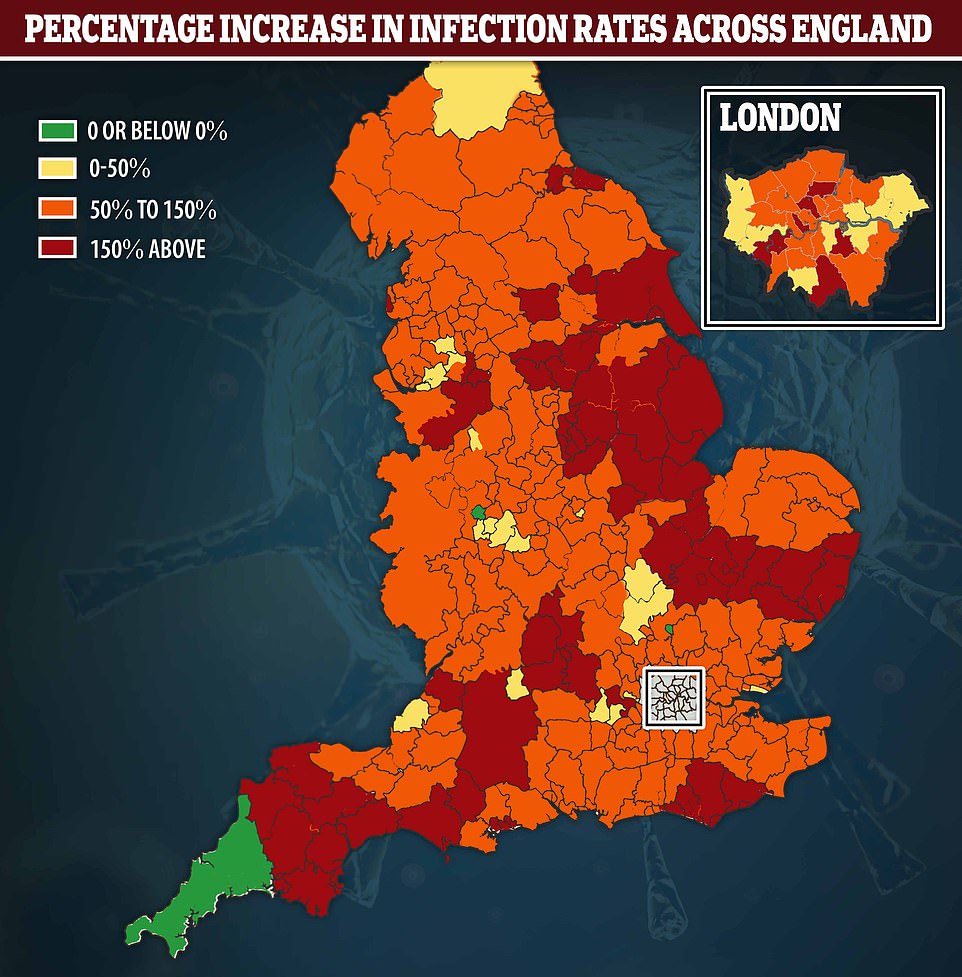 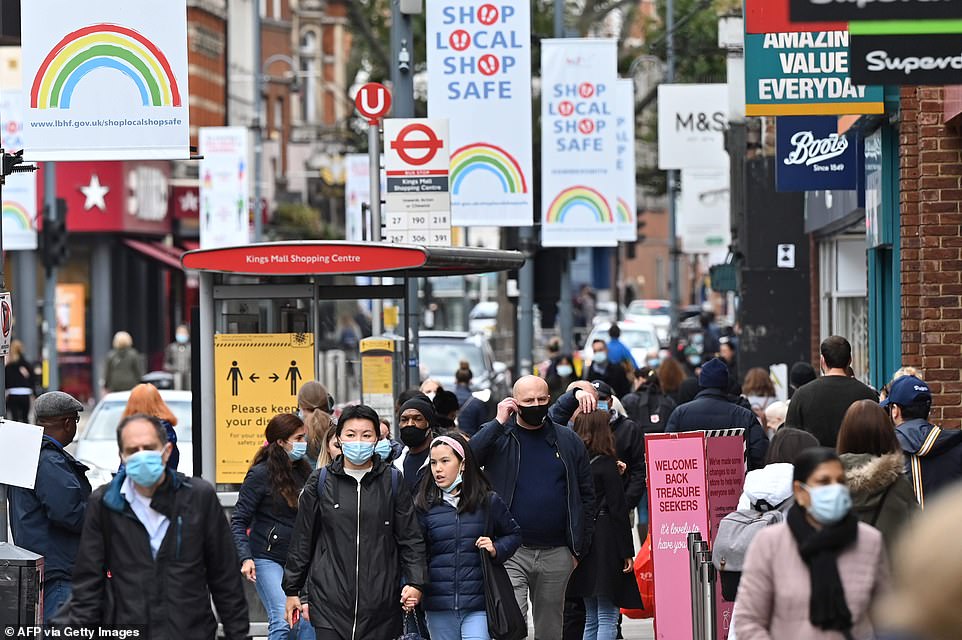 London this weekend saw the streets busy with shoppers, many of whom were in masks

WHAT ARE THE COVID-19 INFECTION RATES IN THE CAPITAL?

‘If he (Chancellor Rishi Sunak) thinks that this is something that we will accept, well it’s not.’

According to the statement, the Government has said pubs and bars, betting shops, casinos, adult gaming centres and gyms will close, while The Sun reported overnight stays in the worst-impacted areas would also be prevented and all-but-essential travel bans put in place.

The paper said Liverpool, Leeds and Newcastle may also be subject to the toughest of lockdown measures which will be implemented four weeks at a time.

In the seven days to October 8, the areas reported nearly 4,000 new cases.

The north-west had 180 hospital admissions for Covid-19 on Friday and, as of Sunday had a total of 1,218 patients in hospital.

Mr Lord said leaders had not seen ‘any tangible scientific evidence to merit a full closure’ of hospitality in the area and said lawyers had been engaged for a Judicial Review into the emergency restrictions due to be imposed on the sectors.

Mr Johnson, who held a telephone conference with Cabinet colleagues on Sunday, will chair a COBR emergency committee meeting on Monday ‘to determine the final interventions’ which he will then announce to Parliament.

MPs will be asked to debate and vote on the measures later this week.

A Downing Street spokesperson said: ‘Our primary focus has always been to protect lives and livelihoods while controlling the spread of the virus and these measures will help achieve that aim.

‘We must do everything we can to protect the NHS and make sure it can continue to deliver the essential services that so many people rely on.

‘This is a critical juncture and it is absolutely vital that everyone follows the clear guidance we have set out to help contain the virus.’

Number 10 stressed the extent of discussions with local leaders over the weekend following criticism from some Northern authorities and mayors that not enough consultation had taken place since the Covid crisis began.

The local authorities have also expressed concern about the impact of harsher restrictions on their own finances, with the statement saying they are existing ‘hand to mouth’.

It said: ‘(We) are currently unable to plan for the medium or long-term.

‘A clearer funding settlement must be achieved that enables us to forward plan, continue to deliver essential public services, avoid large scale redundancies for Local Authority key workers and set a budget for next year with confidence.

‘Therefore, we are seeking assurance from Treasury that, in coming to that national position, no local authorities placed on Tier 3 measures will be put in a position where they are unable to balance their budget this year or cannot set a legal budget next year.

‘In this respect we have agreed that a further discussion with Treasury will take place on this matter.’

A herd of cows led sheriff's deputies on a chase through a city in southeastern Los...

Immigration: Biden administration says more ‘remain in Mexico’ migrants can enter the US