London Irish centre Curtis Rona scored the only try of a 22-9 Gallagher Premiership victory over Leicester and it proved just enough to give his side a happy homecoming.

After 20 years based at the Madejski Stadium in Reading, Irish returned to their heartland in the south west of London and a committed performance at the new Brentford Community Stadium enabled them to win a dour game.

Paddy Jackson converted Rona’s try and added five penalties for a match tally of 17 points while disappointing Leicester could only manage three penalties, two from Argentinian Joaquin Diaz Bonilla and one from Zack Henry. 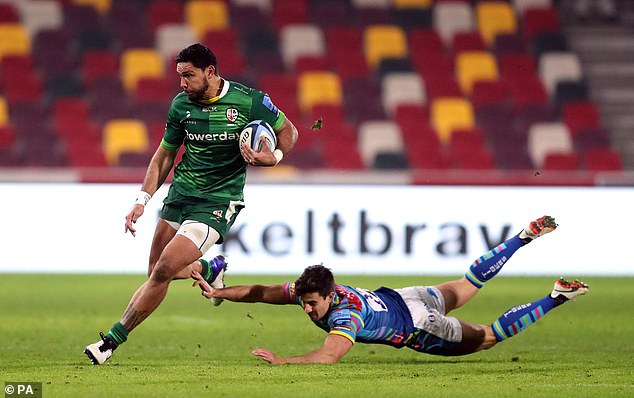 Curtis Rona scored the first try at the new ground, the only one of the game on Sunday

Irish suffered a pre-match blow when veteran flanker Sean O’Brien was forced to withdraw with a calf injury and was replaced by Jack Cooke.

They soon received another setback when Henry kicked Tigers into an eighth-minute lead but this was soon nullified by one from Jackson.

Jackson then missed a penalty from longer range before Leicester wing Kobus Van Wyk was booked for deliberately knocking the ball into touch when under pressure from Ollie Hassell-Collins.

The hosts took advantage of their numerical superiority with Jackson kicking a second penalty to give his side a 6-3 lead at the end of an uneventful first quarter.

Van Wyk returned in time to see Irish score their first try when centre Billy Meakes made the running to provide his partner Rona with an easy run-in. Jackson converted before missing a penalty but his side still held a deserved 13-3 interval lead. 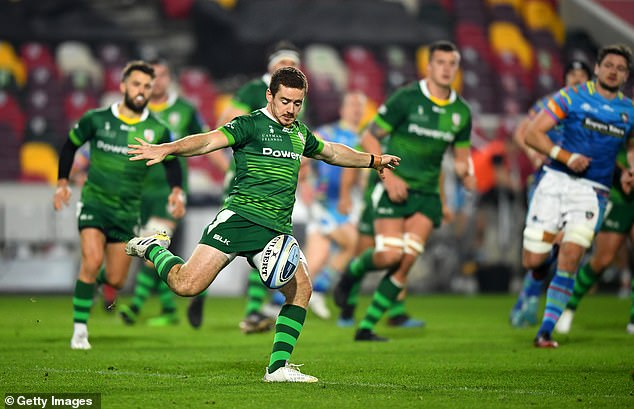 Irish lost scrum-half Ben Meehan at half-time with a leg injury and he was replaced by Nick Phipps, with Leicester withdrawing outside-half Henry.

After 46 minutes, Tigers finally came up with their first period of pressure. South African number eight Jasper Wiese, easily their best player, led the onslaught with a number of powerful bursts and they gained their reward when replacement Diaz Bonilla kicked two penalties in quick succession.

Buoyed by these scores, the visitors’ pack became increasingly dominant; they won a number of scrum penalties but their backs made continual careless errors and lacked the accuracy to break down a stubborn Irish defence.

With 14 minutes remaining and against the run of play, Jackson kicked a crucial 45-metre penalty to give his side some breathing space before the outside-half succeeded with two more to deprive Leicester of a bonus point.

'Our attack is lacking in cohesion': Eddie Jones has acknowledged England's glaring shortcomings

Electrician, 62, took his own life after eye surgery that 'left him with blurred vision'