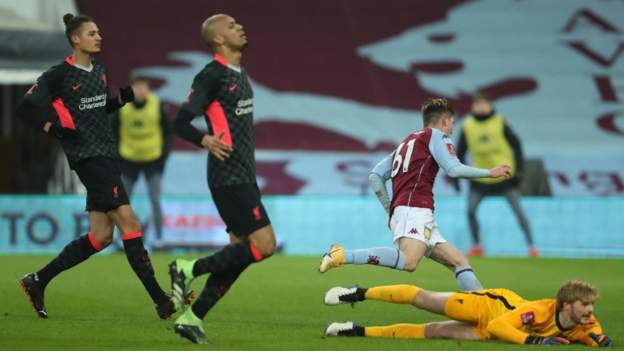 For a short while after scoring a dream goal against Liverpool, Aston Villa teenager Louie Barry allowed himself to think that one of the ultimate FA Cup shocks might be on.

While Villa might be a Premier League side in name, a Covid-19 outbreak at the club in the week leading up to their third-round tie against the Premier League champions meant the hosts’ entire first-team squad and manager were unavailable for the game.

Even some of the under-23s could not play as they had been training with the senior side.

So when a Villa team containing seven members of the under-23 squad and four from the under-18s – a total of zero first-team appearances between them – went behind to Sadio Mane’s fourth-minute header, there was a fear things could get messy.

But step forward Barry, a 17-year-old debutant who was recently on the books of Barcelona, to score a superb goal, racing from deep in his own half, withstanding the attentions of defender Rhys Williams and slotting past Caoimhin Kelleher like a seasoned pro.

Liverpool ended up 4-1 winners – second-half goals from Georginio Wijnaldum, Mane and Mohamed Salah ensuring the top-flight leaders’ progress – but Barry will be the enduring memory of Friday night.

“My family will have been screaming at the TV,” said the youngster, who grew up in the Midlands and was overcome with emotion while being mobbed by his team-mates.

“I was working very hard. When I celebrated everything came out of me. It was relief.

“I’ve never been so proud of a team – from start to finish we gave it our all.”

Barry’s match ended with him swapping shirts with Liverpool defender Fabinho, before quickly realising he wanted to keep his debut kit.

Fortunately, the Brazilian gave it back – and allowed the teenager to keep his Reds top.

In demand even before his big moment

Barry said this was his proudest moment for Villa, a club he joined from Barcelona’s academy for £880,000 last January.

Barry was nurtured by rivals West Bromwich Albion from the age of six but turned down the offer of a professional contract with the Baggies. He moved to Barcelona and spent six months there before signing for Villa.

West Brom were scheduled to receive £235,000 in compensation, but they have not been paid despite the club reporting the matter to Fifa.

If Barry had gone to Villa straight from them, the fee would have been decided by a tribunal if there had been no agreement.

‘It was a monumental effort’

Mark Delaney, Villa’s under-23 coach, took charge of Friday’s match and said Barry’s assured finish against the Reds came as no surprise to him.

“We did say that if Louie does get a chance, he’s a goalscorer and he took it ever so well,” said Villa’s former full-back.

“We see it every day, but to do it on this stage against a quality team, he just showed a really good composure and that bodes well.”

Delaney, Barry and the rest of the matchday squad only knew they would be facing Liverpool on Friday after the club’s training ground was closed following the coronavirus outbreak.

Delaney said his side produced a “monumental” effort.

He added: “We knew Liverpool would have a lot of ball and there was the potential of conceding early goals. We reacted very well and stuck together. We didn’t give them too much territory.

“We thought maybe one or two bits of quality and we might get something and we did. Three or four passes and a lovely through ball.”

Liverpool manager Jurgen Klopp said he did not know how to prepare against Villa after finding out about their predicament on Thursday.

“It was a tricky one,” said the German. “I have never had this kind of challenge in my life, when you have no idea who you are playing. All our preparations for the game went in the bin and we had to start again.”

After watching his side eventually convert their dominance into victory, Klopp said he was not surprised by the performance of Villa’s youngsters.

“Academy players are good players,” he added. “We played here with our kids [Carabao Cup in 2019] and they gave Villa a proper game as well.

“If you don’t play well you have problems, but in the second half we played like we should have done from the beginning.”

Lost a job? How to pay taxes on unemployment benefits

IFFHS: Messi has been the best playmaker in the footballing world of the last decade