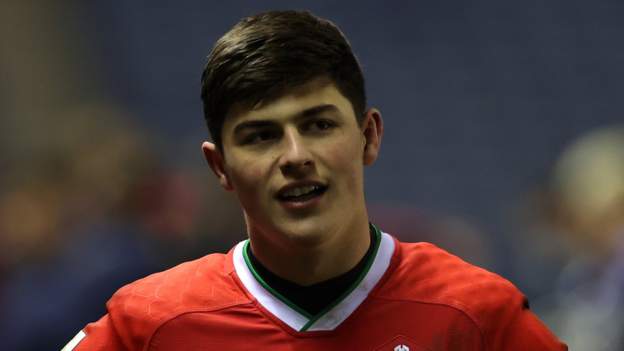 England coach Eddie Jones admits he was always going to struggle to convince Wales wing Louis Rees-Zammit to play for his side.

The Gloucester wing, 20, could have qualified for England through a five-year residency but the Cardiff-born player was set on Wales, who can clinch the Triple Crown next Saturday.

“I heard he was very Welsh and wanted to play for Wales but said that if he was interested, we would be.”

Aged 16, Rees-Zammit left Wales for Hartpury College in Gloucestershire. He made an instant impression after making his Gloucester debut aged 18, which brought him to the attention of Jones.

“He had to do five years’ qualification in terms of residency and a young guy like him is not going to sit around for five years,” added Jones.

“I wished him good luck and I’m pleased he’s doing well – I just hope he does not do too well against us.”

Rees-Zammit’s clinical finishing has been underlined by a haul of four tries in six Wales appearances, including two in the recent victory over Scotland, and Jones knew from an early stage the winger was a talent worth courting.

Now Rees-Zammit faces the prospect of a duel against Gloucester team-mate Jonny May next week at the Principality Stadium.

Jones hopes some inside knowledge from May will help England.

“Like any young player, there are areas of his game he is deficient in and we have to be good enough to find those areas,” said Jones.

“I am sure Jonny will share his thoughts on him and we will talk to him.

“Louis is progressing nicely and Jonny has been at the top of his game for three or four years, he was close to being the best left wing at the World Cup.

“Jonny constantly scores tries out of nowhere. It will be a great match-up.”