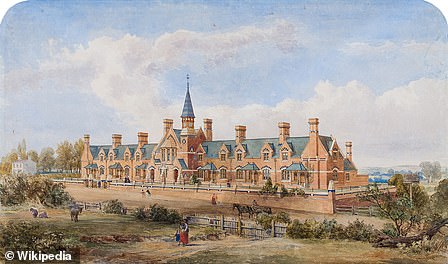 At its peak, Colney Hatch was occupied by 2,500 mental patients. Pictured: a watercolour by an unknown artist, circa 1855

The original hospital was built as the Second Middlesex County Asylum and was in operation from 1851 to 1993. It was opened on July 17, 1851 by Prince Albert, with William Charles Hood being its first medical superintendent.

After the County of London was created in 1889 it continued to serve much of Middlesex and London. During much of this time its smaller prototype, Hanwell Asylum, also operated.

At its peak, Colney Hatch was occupied by 2,500 mental patients. For much of the 20th century, its name was synonymous among Londoners with any mental institution.

Extensions built in 1857 expanded its capacity to 2,000 inmates – but by this point there were concerns over serious construction defects, with the walls and rafters visibly separating in one room. Reinforcement works to fix the roof and insufficient foundations took place in 1858.

By 1880, by which point more extensions had been added, the conditions for inmates were poor. In 1896, a temporary building made from wood and corrugated iron was erected to house 320 chronic and infirm female patients in five dormitories – despite warnings from the Commissioners in Lunacy that this would pose a serious fire risk. 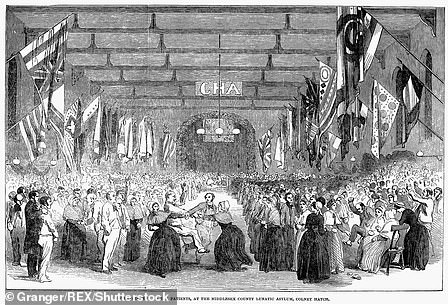 Pictured: a drawing dating back to 1853 of entertainment provided for the patients at the ‘Middlesex Country Lunatic Asylum’, Colney Hatch

Perhaps unsurprisingly, it was destroyed by a fire in January 1903, filling 52 women. In its place, seven new permanent brick villas were built. In 1912 a disused carpenters’ shop and stores by the railway siding were converted into additional accommodation for male patients and further extensions were made to staff accommodation in 1927, by which time staff included nine full-time doctors, 494 nurses and 171 probationers.

The asylum was renamed the Colney Hatch Mental Hospital in 1930, following the Mental Treatment Act, and in 1937 a female nurses’ home was built. That same year the hospital was renamed yet again, this time as Friern Mental Hospital.

During WWII, 12 wards were requisitioned for use by the Emergency Medical Service (EMS) to be run by St Bartholomew’s Hospital in the City of London. They were used to accommodate 900 civilian war casualties and the displaced mental patients were redistributed around other wards and to Bexley Hospital in Kent.

The hospital was criticised for its number of elderly patients considered ‘not in need of psychiatric’ care during a Committee of Enquiry in 1966, which highlighted the issue of alternative accommodation for pensioners and a lack of social workers.

By 1973 the number of patients had reduced to 1,500, and by 1979 the hospital only had 1,023 beds. In 1989 it was decided that the hospital should close and its patients reintegrated into the community where possible.

It closed in 1993, at which point the building and grounds were sold to Luke and Brian Comer’s Comer Homes in 1995. The building was converted into luxury flats and became known as Princess Park Manor.