Man City 0-2 Man Utd: It’s not a lack of ability that has cost Manchester United the title – Shearer analysis

Manchester United have been a strange team this season and it is their inconsistency that has cost them their chance of winning the title – not a lack of ability.

If they had played like they did in Sunday’s 2-0 win at Etihad Stadium more often, Ole Gunnar Solskjaer’s side would be a lot closer to Manchester City at the top of the Premier League table. 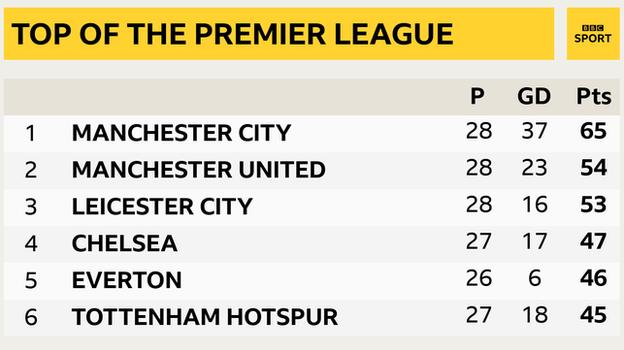 But while they produced a brilliant team performance to end City’s 21-game winning run, United have been poor against lesser teams like Sheffield United, West Brom and Crystal Palace recently.

United are now unbeaten in their past 22 away league games, which is a great achievement. They are obviously very difficult to beat, but their problem is that they have not always offered enough going forward to win those matches.

I watched them draw 0-0 with Palace at Selhurst Park on Wednesday and they almost sleepwalked through the 90 minutes.

It’s been the same story in a few games since they went top of the table in January. They’ve looked flat at times, and short of energy and ideas.

It’s hard to know what to expect from them and that’s why they will not be winning the Premier League this season, even though we saw against City just how good they can be.

‘United had the belief and desire to go there and win’

United thoroughly deserved their win over City on Sunday, and every man played his part.

It was a great result, and was down to far more than them just grabbing goals on the counter-attack which is how they have taken points off Pep Guardiola’s City on occasions in the past.

They still did that very well of course – defensively they were so well organised, and they were superb on the break all afternoon.

On top of that, though, they had the belief they could win the game and the desire to carry that out. We have been used to seeing them adopt a cautious approach against the other ‘big six’ clubs since they were scarred by their 6-1 defeat by Tottenham at the start of the season, but this time it was different.

Right from the off, United showed their intent by going on the attack, which led to them getting their penalty – and scoring it – in the opening seconds.

I was expecting a response from the runaway leaders, but United snuffed it out without ever looking like they were in danger. They were so well organised, there was no way through for City for most of the game.

At times when City did threaten, it was great to see Marcus Rashford sprinting back to rob Riyad Mahrez of possession on the edge of the United area – that’s how much the win meant to him.

Rashford was not the only United player who gave everything. You can go right through their team, and they all worked extremely hard, individually or in numbers when they had to.

The early goal suited them because it gave them something to protect, but let’s not forget how good United were going forward too.

They were always thinking on the front foot, as we saw with the part their goalkeeper Dean Henderson played in their second goal, to keep the ball alive and then send Luke Shaw galloping forward.

Creating chances was not an issue for United this time, and they had much better opportunities than City did. They could, and maybe should, have ended up with more than two goals.

How City have set the standards this season

City had an off day by their high standards, but it was just a blip.

Their long winning run had to come to an end at some point, and Pep will be annoyed that it happened against their neighbours and rivals, but this is not the start of a collapse, far from it.

They are still 11 points clear at the top with 10 games remaining and they will go on and win the Premier League.

When I talk about how United have lacked the consistency they need to take the title, I look at City as the team who have set the standards there this year. No-one else has managed it, apart from them.

After a patchy start, Guardiola’s side have been absolutely relentless in the past three months. That’s the level United have to aim for, because that’s what it takes.