Tottenham’s defeat in Sunday’s Carabao Cup final means their wait for a first trophy since 2008 goes on, but that result feels like the least of their problems right now.

Spurs have got to attract a new manager in the summer after sacking Jose Mourinho last week and, for anyone contemplating taking the job, there are so many things that appear uncertain.

Harry Kane’s future is one of them, but there are a lot of other things that need to be figured out at the football club in order to appease the fans, who are hopefully going to be back at their stadium in large numbers at the start of next season.

We saw the first part of that move to get the supporters back onside when the owners got rid of Mourinho, now the next part is convincing them that the people running the club can be trusted after their decision to try to enter the proposed European Super League (ESL).

I think chairman Daniel Levy and owners ENIC were already on thin ice with the fans anyway after the season Spurs have had, but things seem worse than ever now.

The supporters made their feelings clear with their protests against the board over the ESL bid before Wednesday’s game with Southampton.

There is more disruption to come, because the players will speak to the press a lot during the European Championship. It is all going to come out about what was going on under Jose, who is happy and who wants to move on. All of that will play out over the summer.

When it does, there are some big decisions to be made – and the owners have to get them right to restore some stability to the club after what has been a disastrous few months.

‘Spurs’ season has been frustrating and confusing to watch’

Whichever way I look at it, Spurs have had a terrible campaign, and Sunday’s 1-0 defeat by Manchester City means they won’t have some silverware to provide any consolation.

Tottenham were top of the Premier League in mid-December and, with the quality they have got in that squad, they should not have capitulated the way they have done since.

Everything from the amount of points they have lost from winning positions to their defensive mentality, and the way they have brought Gareth Bale in and not played him, has been frustrating and confusing to watch.

Things have fallen apart in Europe too. Arsenal have also had a shocking league campaign but the Gunners are into the Europa League semi-finals and have a great chance of making the Champions League through winning that.

Spurs have missed a golden opportunity to be in that position themselves, because this year’s Europa League is the weakest I have seen for a long time, and it was there to be won by a team with the players they have got.

So in every aspect, it has been an absolutely awful season, unless they can somehow salvage a top-four finish from here – and I don’t see that happening.

The way things have been going, I’m just surprised they have still even got a chance of making it. That’s probably the only positive you can take from their situation now. 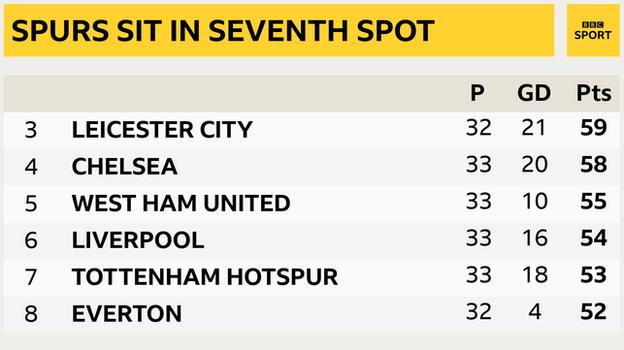 ‘Ryan is a fighter but Spurs will come up short’

Ryan Mason has been chucked in right at the deep end as interim manager and there is not much he can do in the next five games, apart from getting the players happy and trying to get them playing as close as possible to the style of football he wants in such a short space of time.

I know Ryan very well from my time at the club and he has been a fighter his whole life, firstly to prove he was good enough as a young player when he was not being given a chance, and then to recover from the serious head injury that ended his career at 26.

He won’t give up on Spurs’ season but, whatever happens there, this is all great experience to be managing at this level before he has even turned 30.

If the chance does come to take the job permanently, he will take it, of course, but I am expecting the club to go in a different direction. I thought that before the Carabao Cup final, whether he won it or not.

Knowing Ryan, what he will do is get the players all pulling in the same direction again, to try to get in that top four, and it won’t be his fault when they come up short.

They are not at Chelsea’s standard and they are not at Leicester’s level either, so I don’t see how they break into the top four. The only thing that might save them is that Chelsea have got a really tough run-in, and that is about it.

‘This is the worst time to sell your star player’

Kane’s future is already a talking point, and that speculation will obviously increase if Tottenham are not in the Champions League next season.

Spurs are not the only team who might contemplate selling a big star who could help fund a rebuild – Liverpool are in the same boat, and it seems like people are quite comfortable with that.

The problem is, every club is going to be short of funds this summer because of the Covid pandemic. So, if you are trying to raise some cash, the market has gone down drastically.

Basically this is the worst time to sell your star player, because you are not going to get anything like the numbers you would have done two years ago.

Kane’s contract runs until 2024, so Spurs don’t have to sell him now and I don’t think they will do. They do need to keep him happy though, and one way of doing that is by starting to play on the front foot with more energy and a better tempo.

The same goes for the rest of that squad. My hope now is that, whoever the next manager is, he is someone who will get Tottenham playing in a way their players enjoy, and their fans want to watch. That would be a good start.