Manchester City manager Pep Guardiola has got a lot to sort out. His side had an awful afternoon against Leicester City on Sunday and that was as poor as I’ve seen them play in a long time.

It was more than just the fact they conceded some bad goals – what was really worrying was how lost they looked, from front to back.

When things have gone wrong for City under Pep in the past, it has been easy to criticise their defence for being unable to deal with counter-attacks or for making individual mistakes.

We saw both of those things happen again against Leicester, but I think the whole team has to take responsibility for this defeat – not just their defenders.

The players in front of them did not put enough pressure on the ball and got played around too easily. They weren’t staying with runners or getting up to the ball.

That, as well as the fact they seemed unable to create any chances when they came forward, was the worst thing about the performance, and most unlike what we are used to seeing from them.

Why were City so short of ideas? 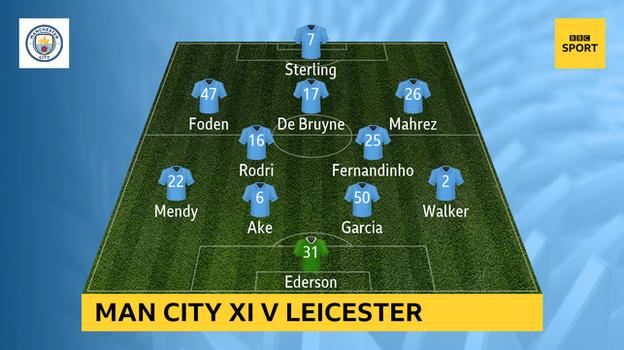 City were without injured forwards Sergio Aguero and Gabriel Jesus, who could both be out for several weeks.

Being without a recognised striker on Sunday was obviously going to be a problem, but it was the knock-on effect of dealing with that which had a bigger impact on their performance.

Pep usually goes with a single pivot as part of a 4-3-3 but, with the players he had available, he went with two holding midfielders in Fernandinho and Rodri and moved Kevin de Bruyne to more of a number 10 position, behind Raheem Sterling who was playing as a central striker.

Sterling is far more dangerous when he cuts in from the left and De Bruyne is usually at his best when he can go down the right – a central right rather than wide right – and put in his trademark crosses.

We did see the Belgian do that a little bit in the second half, but before the break it was all central and he couldn’t really influence the game like he usually does.

Also, Phil Foden stayed out wide on the left rather than in the middle, where he sees more of the ball and is more effective.

So, arguably, City had three, four or even five players out of position – or at least not playing in their best position – and, on top of that, their full-backs never offered anything attacking-wise down the flanks.

No wonder they were so short of ideas.

‘City failed to protect their back four too’

City’s struggles in attack were made worse by their mistakes at the back. The three penalties they conceded were all very similar too.

Each time, they let the Leicester player get on the wrong side of them inside the area, then made a clumsy challenge.

It is just basic defending, but the gaps between each member of the back four were too big and there was a lack of communication.

That was only half the problem, though, because protection wasn’t there in front of them either. For all the great football we are used to seeing City play under Pep, they have always been one of the best pressing teams.

Usually, they don’t give you a second on the ball, even when you are deep in your own half. On Sunday, though, they let Leicester get through them far too easily.

That was especially noticeable when Fernandinho went off early in the second half. I can understand why Pep decided to bring on a recognised striker in teenager Liam Delap, but it left his team far too open.

City had dominated possession in the first half but there were times in the second period when they were all over the place, even when they weren’t outnumbered on Leicester counter-attacks.

Leicester gameplan was spot on

As bad as Manchester City were, Leicester deserve lots of credit because their gameplan worked perfectly.

Jamie Vardy did not just get his hat-trick, he dropped back and stopped Rodri getting on the ball to build attacks and left City’s two centre-halves to have the ball.

Leicester’s two central midfielders, Youri Tielemans and Nampalys Mendy, were fantastic – aggressive and tenacious in the tackle, but also showing great quality on the ball when they looked to start a counter-attack. 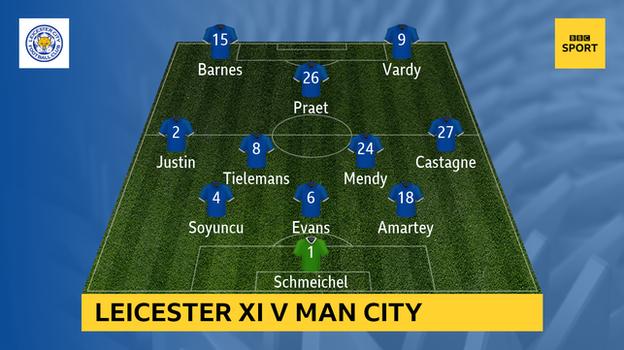 At the back, Jonny Evans and Calgary Soyuncu are a top-class centre-back pairing – as good as anyone else in the Premier League.

If you compare them to what Pep has got, they would start for his team, no doubt about it.

They played in a three with Daniel Amartey at Etihad Stadium, but Evans coming back after his suspension played a massive part in the Foxes’ success. He was everything Manchester City were missing – a leader, a talker and good on the ball too.

It looks like Pep sees Benfica centre-half Ruben Dias as the answer to his side’s problems there, with him and Aymeric Laporte becoming City’s first-choice centre-back pairing.

Whoever it is they bring in, though, City will need to improve in front of them too.

It doesn’t matter who your defenders are – if you keep letting attacking players like Vardy and Harvey Barnes get at your defence, they are going to cause you problems.