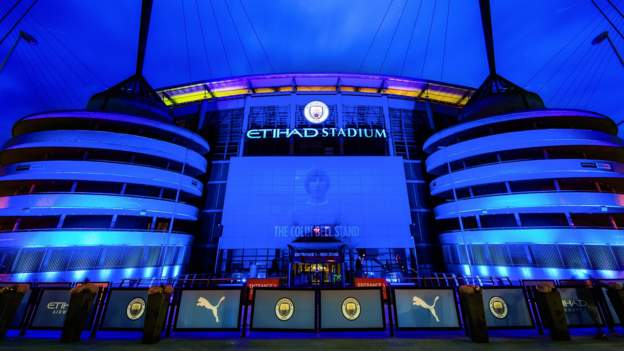 Manchester City are to install 5,620 rail seats this summer to “enhance supporter safety” at Etihad Stadium.

The seats, which can be folded away to create a ‘safe standing’ area with barriers, will be installed in the lower tier of the South Stand.

Standing at grounds in the top two tiers of English football is banned, but City say this work means they will be ready should the rules change.

The seats will be installed in time for the start of the 2021-22 season.

“While we will continue to remind supporters they should remain seated during matches, the installation of a rail seating area means Etihad Stadium will be ready should the government bring forward legislation to introduce safe standing in the Premier League,” said City’s managing director of operations, Danny Wilson.

Tottenham’s new stadium has “safe seating” which has been “future-proofed” for the potential introduction of standing. Wolves have recently installed barrier seating at Molineux as part of a trial, with Manchester United scheduled to install barrier seating at Old Trafford this summer.

Standing in English football’s top two divisions was outlawed following recommendations made in the Taylor Report into the 1989 Hillsborough disaster, in which 96 Liverpool fans lost their lives.

In recent seasons, campaigners have called for standing to be allowed in grounds once again. Barrier seating has been developed to provide seats which can also be converted to standing areas.

In 2018, new guidance from the Sports Ground Safety Authority, the body in charge of ground safety, allowed the use of rail seats.