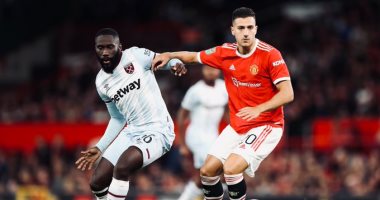 Manchester United ended the first half of their match against West Ham 1-0, in the confrontation that the two teams are currently meeting at Old Trafford, in the League Cup Round of 32 competitions.

West Ham’s only goal came in the 9th minute through Manuel Lanzini.

Portuguese star Cristiano Ronaldo is absent from today’s match, as Solskjaer preferred to rest him, and a number of stars are absent, most notably Bruno Fernandes, Paul Pogba, Harry Maguire, Raphael Varane and others.

And the meeting is renewed again between Manchester United and West Ham, after they played a strong match last Sunday, in the fifth round of the English Premier League, and ended with the Red Devils winning 2-1 in a killer time.

Which gives Manchester United’s match against West Ham more enthusiasm and rivalry, as the former tries to continue its control and achieve victory in order to qualify for the round of 16, while the Hammers seek to achieve surprise and avenge Sunday’s defeat, in the Premier League.