United have had their eye on the 24-year-old for some time, having previously invited him to Old Trafford for a tour of the club in 2015 before he moved from Valenciennes to Red Bull Salzburg aged 16 for £2million.

Having signed a new contract until 2023 with his current club RB Leipzig, Upamecano’s relatively small release clause will activate next summer – allowing Solskjaer to reignite his long-standing interest in the defender.

According to The Times, Upamecano’s release clause will become active during next years summer transfer window for £7million less than his previous – allowing a host of top-flight club’s time to prepare a transfer swoop.

Solskjaer will be looking to get ahead of the pack as he requires defensive stability within his Manchester United side.

Upamecano is a dynamic, confident defender who excels when playing in the counter-attacking style that Solskjaer deploys.

The Red Devils manager will have an opportunity to watch Upamecano in action as his players take on Leipzig in Wednesday’s Champions League fixture.

Having previously denied claims that he was trying to sign Upamecano, Solskjaer claimed he refused to respond to speculation out of respect for Leipzig – but insists he will be watching the defender ‘close up’ on Wednesday.

Solskjaer said: ‘I’ve always tried to respect that they are players for other teams and don’t want to comment on every player that we are linked to, but since he’s playing against us tomorrow I know he’s a very good player so we can see him close up.’

Upamecano has featured 120 times for Leipzig since he joined from Red Bull Salzburg in January 2017.

Upamecano’s impressive form for Leipzig has seen him gain the attention of Europe’s elite. 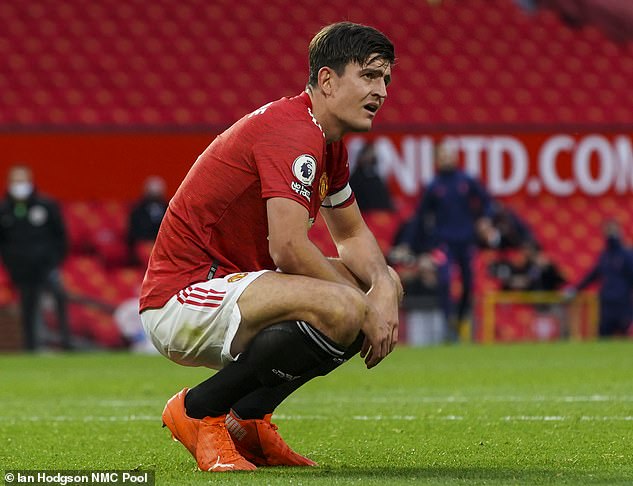 However, it is still Manchester United who are leading the charge for football’s most coveted young defenders.

United currently have six senior centre-backs in the first-team squad but have failed to show any defensive stability.

Harry Maguire, who joined for a world-record fee for a defender – £80m – in 2019, has had a torrid time recently at the heart of the United defence, whilst players such as £31m Victor Lindelof and £27m Luke Shaw are flattering to deceive, having both made costly errors in recent Premier League defeats.

Should Solskjaer sign Upamecano, he will hope his defensive troubles will finally be over.