Mancini: There is no problem with the Italian attack and we have bad luck 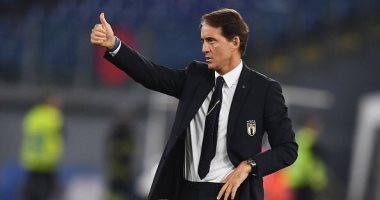 “I don’t worry too much about the latest performances,” Mancini said in a pre-match press conference. “Psychologically, the boys should feel comfortable, they won the European Championship and they have to play calmly.”

He added: “Unfortunately, the ball doesn’t get in sometimes, and we in Italy go looking for the culprit in everything, but we have to isolate ourselves a little bit from this and do certain things a little bit better and the team has to keep doing what it is doing, the goals will arrive.” .

He continued: “If we win tomorrow, we will get the points back. Having said that, we may also need the goal difference if we draw the points. We have three games. If we win all of them, we qualify. Tomorrow’s match will not be easy. They are a physical aspect and they will stand behind.” That, it will be up to us to open it up and manage it in the best possible way.”

Italy is at the top of the standings of Group C in the World Cup qualifiers with 11 points from 5 matches, ahead of Switzerland, which comes in the group runners-up with 7 points, while Lithuania is at the bottom of the standings without any points after losing in the four confrontations it has fought so far..

The Italian team, led by coach Roberto Mancini, is seeking to regain the tone of victories again, after a goalless draw against Switzerland, in the confrontation that took place on Sunday evening at St. Jacob’s Park, as part of the fifth round of Group C matches..