A married couple who have been together for more than ten years have revealed how welcoming another woman into their relationship has actually improved their romance, while detailing what life is like living as a throuple while raising five kids together.

Veterinary technician Stephanie Alicea, 31, and barber Hector Alicea, 30, from Tampa Bay, Florida, met as teenagers in 2008 and got married just two years later. Wanting to settle down into family life, the couple went on to have two children: Zoey, 12, and Gabby, five.

However, at the start of 2020, after ten years of marriage, the couple decided that they had too much love to share just within their family of four, so they made the mutual decision to look for a third person to bring more joy and love into their already flourishing relationship. 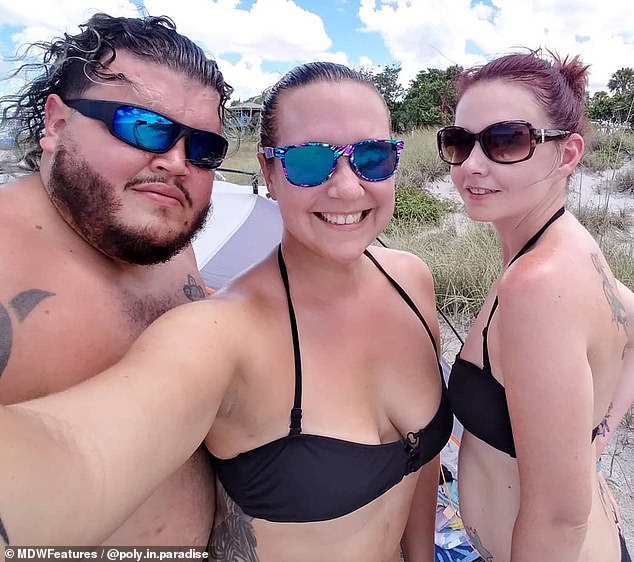 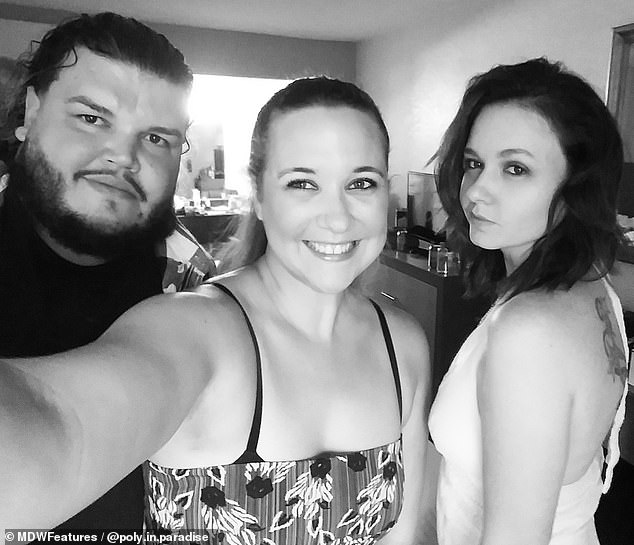 New normal: Both Hector, 30, and Stephanie, 31, say that living with Carissa, 30, has made them happier than ever before, despite admitting they struggle with jealousy issues 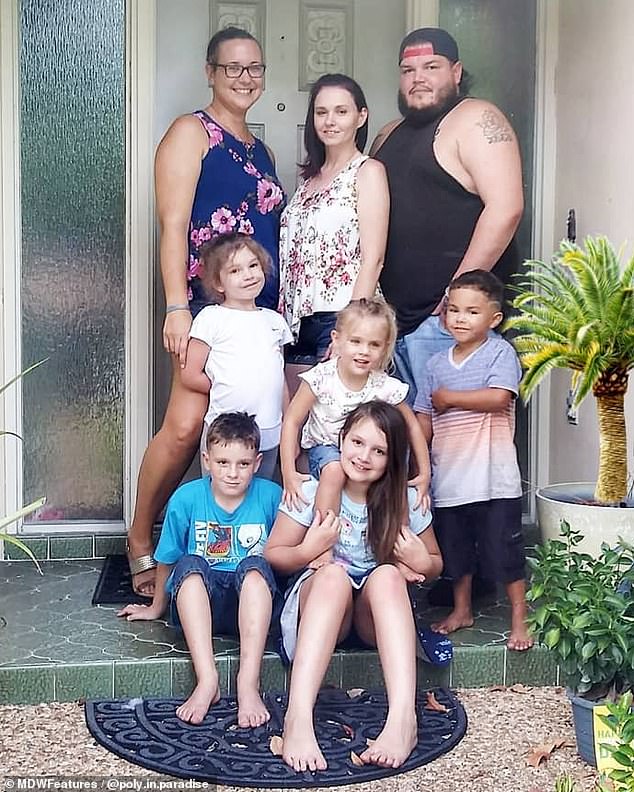 Brood: The throuple decided to live together after just a few months of meeting, and they are now raising Hector and Stephanie’s two kids, and Carissa three children, together 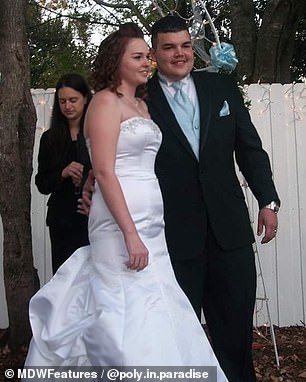 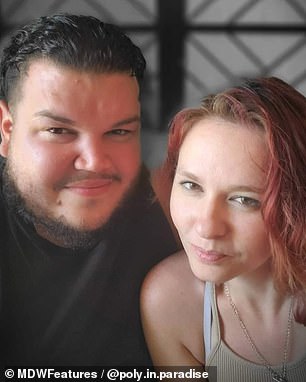 Evolution: Hector and Stephanie (pictured left on their wedding day) made the decision to invite Carissa (right with Hector) into their relationship after meeting her on Facebook

For them, polyamory is about being able to share love and intimacy with a third person in a very real way; they believed that constricting their love to just themselves was acting selfishly. They began searching Facebook Dating for a suitable partner.

The duo came across the profile of receptionist Carissa Barclay, 30, from Florida who stated on her profile that she was very much open to joining a triad relationship so they decided to reach out to her.

After a two hour initial meetup in Starbucks, the trio knew that the chemistry was there for something beautiful to flourish.

Within a short few months, the trio had fallen deeply in love and Carissa and her three children – Gavin, nine, Sawyer, six, and Hayden, three – from her previous marriage moved in with Stephanie and Hector. The triad have been inseparable since.

However, the new set up hasn’t been without its unique challenges. For Carissa, joining a ten year marriage has been the hardest part of adapting to her new lifestyle as Stephanie and Hector have a long shared history.

As a result, jealousy naturally has arisen although the trio say that their excellent communication has not led to this becoming an overwhelming issue.

The trio have also had a mixed response from their families with Hector’s mom unhappy with her son’s untraditional relationship. Stephanie has even had to cut ties with some of her extended family who disagree with the triad’s polyamory.

While the trio’s children have largely adapted well to the change, Stephanie and Hector admit that their eldest child, Zoey, has found it harder to adjust with three new siblings and a new parent in the house. 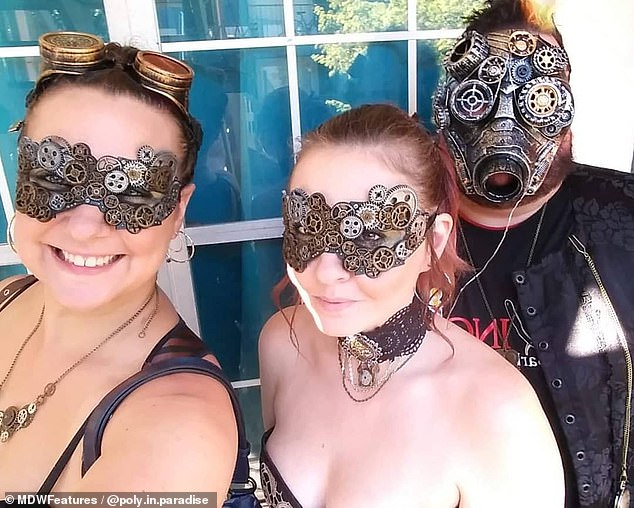 Tight bond: Within just months of meeting Carissa (center), Hector and Stephanie had invited her to move into their family home with her three children 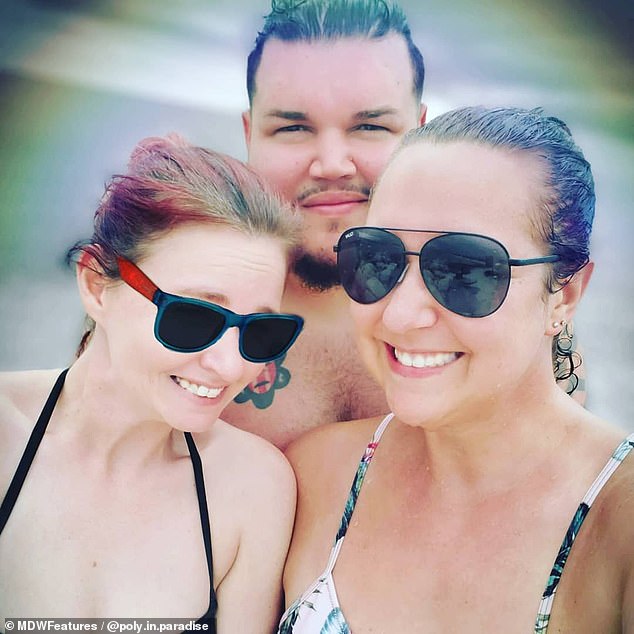 Work: While the trio insist they are blissfully happy, they admit that the set-up has not been without its difficulties, and Carissa says she does struggle with jealousy sometimes 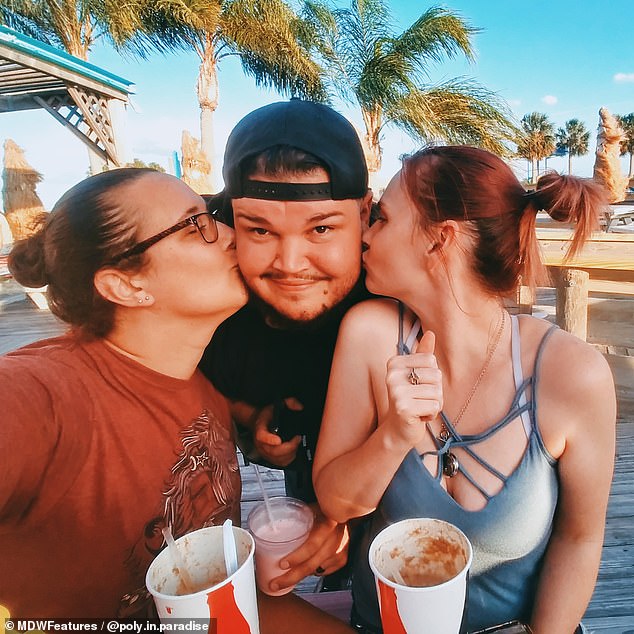 Difficult: The trio have also had a mixed response from their families, and both Hector and Stephanie have faced outrage from their relatives 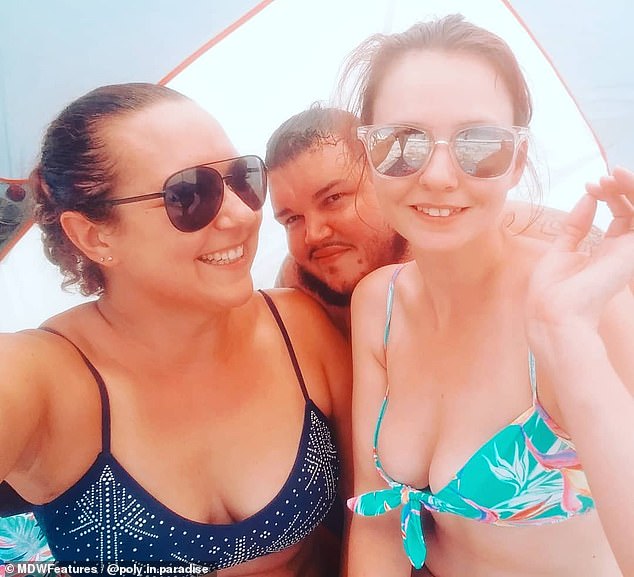 Controversy: When they are out in public, the trio say they receive stares from strangers, and they have also been targeted by trolls online

Sharing space with four new people – in particular the addition of three younger siblings – has been a shock to the system for the preteen.

When out, the couple often get bemused stares from strangers whilst online, they have received some negativity from trolls who have responded to pictures of Stephanie and Carissa kissing with vomiting emojis.

‘We met online after we matched on Facebook Dating,’ Carissa said.

‘We met for coffee at Starbucks for two hours but it felt like minutes. The conversation just flowed and the chemistry was definitely there.

‘Polyamory to us is having the capacity to love more than one person in an intimate and very real way.

‘We are all equal partners, equal lovers, and have fidelity within the triad.

‘Stephanie has had to let go of a couple family members. It’s sad but it’s their choice.

‘My parents are coming to terms with it and my brother really couldn’t care less.

‘My friends are definitely happy for me. They know I’ve had some pretty toxic relationships and they are thrilled to see me treated so well.

‘When we’re all out together, people look at us with confusion and curiosity mixed with a little amusement – sometimes approval, sometimes displeasure, but mostly just a lack of understanding.

‘We have had a few vomit emojis on our posts of me and Steph kissing which has been disappointing but most people have been supportive so I hope that continues.’

One of the triad’s challenges has been co-ordinating their households together. 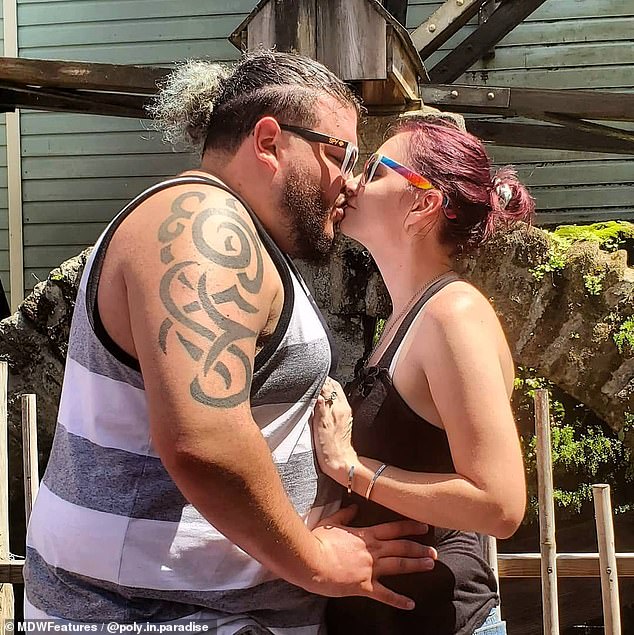 Passionate: Hector, Stephanie, and Carissa all enjoy a romantic relationship with one another 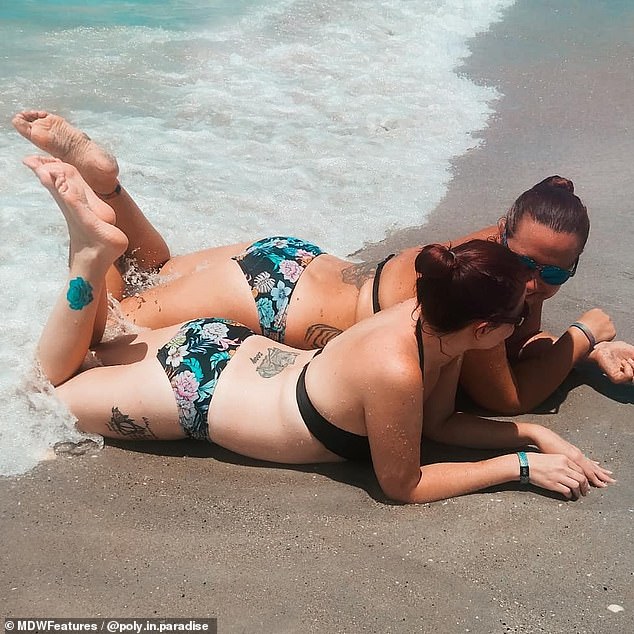 Attack: Stephanie and Carissa have been targeted by online trolls, who left comments with vomiting emojis on pictures of them kissing

‘Steph and I have two girls together that we brought to the relationship and Carissa has three kids from a previous marriage,’ Hector said.

‘They like having more brothers and sisters – there is always someone to play with. They do get annoyed with each other occasionally, but what siblings don’t? 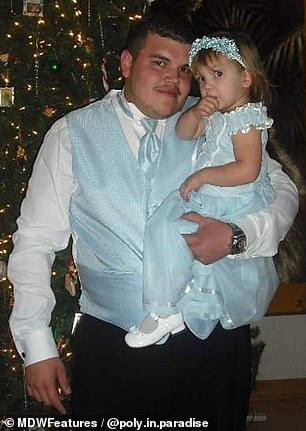 Struggle: Hector and Stephanie admit that their eldest child Zoey (pictured with her dad) has struggled to come to terms with the new living arrangements

‘The hardest part has been our oldest adjusting to having three parents. Preteens and adjusting don’t exactly go hand in hand.

‘I think we are all pretty good about talking about our feelings when they arise including jealousy.

‘We aren’t immune to it, we just work through it. Great communication is vital in a throuple relationship.’

Although the trio have luckily avoided too much negativity online, they do think that there is definitely a misconception that those in a triad relationship are automatically promiscuous – something that couldn’t be further from the truth for them.

‘We want people to understand that our relationship is not like the depictions of polyamory in the media,’ Hector said.

‘We are a closed triad meaning we are not seeking additional partners and not having relationships outside of the triad.

‘This isn’t about sex – we aren’t swingers although there’s nothing wrong with that.

‘Our relationship is real, it’s valid, and it’s our normal.’

Up or down? Ethereum (ETH) price prediction for October

Has your libido left you during lockdown?

A central California cannabis dispensary is offering selected products for only one penny for any customer...