Rules against homophobia have been removed from the bullying charters of British private schools in the Middle East, an investigation has found.

The likes of King’s College, Sherborne and Royal Grammar School Guildford (RGS) all have branches in the region, which earn them tens of millions of pounds as part of franchising deals.

But their locations in extremely religious societies mean they must abide by strict Islamic government guidelines on ownership, curriculum content and patriotism if they want to be granted operating licences, the Times reported.

Now an investigation has revealed that several of the schools have clear differences between bullying guidelines published in the UK and Middle East – where homosexuality is often illegal.

In their UK versions, homophobic bullying is clearly referenced and forbidden, while in their Middle East franchises, most or all references to sexuality or LGBT+ students have been scrubbed.

The franchising deals typically see British schools work with a company in the host country, which pays to franchise their respected names. The franchised schools then follow the British curriculum and the original schools’ customs – but only to a certain extent.

Strict rules in the past have meant banning any teaching of the Holocaust, evolution and even the existence of Israel.

An investigation has revealed that several of the schools have clear differences between bullying guidelines published in the UK and Middle East – where homosexuality is often illegal (Pictured: LGBT+ protest held in Kenya on January 13, 2022)

LGBT+ charities last night urged the schools to ‘create environments in which all children can grow up accepting each other’.

Mo Wiltshire, director of education and youth at Stonewall, said: ‘The UN Convention on the Rights of the Child states that children should be ‘protected against all forms of discrimination’. These are universal rights.’

The Times investigation found King’s College Doha, the sister school of King’s College, in Taunton, removed homophobia from its website definition of bullying – which is set by the National Society for the Prevention of Cruelty to Children (NSPCC).

The charity said it was ‘concerned’ over the edit – which King’s claimed was due to be updated. It did not comment further but claimed its new anti-bullying guidelines included homophobia.

Meanwhile RGS forbids students from making ‘homophobic’ or ‘transphobic’ comments on its British website – before omitting any such references on the webpage for its Qatar counterpart.

A spokeswoman told the Times it ‘must comply with the laws of the country in which we are operating’.

She added: ‘Royal Grammar School Guildford will always challenge bullying, whatever the root.’

Elsewhere, Sherborne School in Dorset vows to ensure its ‘school policies and practices are inclusive and supportive of LGBT people’.

However no such guarantee is made for its students in the Doha branch. 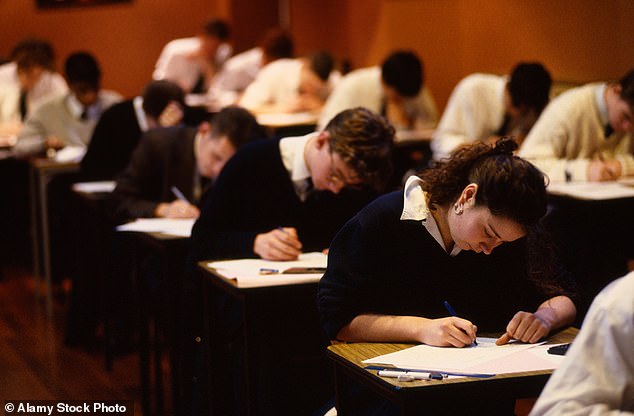 Mo Wiltshire, director of education and youth at Stonewall, said: ‘The UN Convention on the Rights of the Child states that children should be ‘protected against all forms of discrimination’. These are universal rights.’ (file photo)

Dominic Luckett, the headmaster, said: ‘Our experience of working with Sherborne Qatar over the past ten years makes it clear to us that the school does not tolerate bullying or discrimination.’

Brighton College, whose home is often seen as the queer capital of Britain, has three outposts in the Middle East. It was not immediately clear if its bullying charter had omitted homophobia or other LGBT+ references.

However a former teacher at the Dubai branch said that they were forced to cover up Israel on maps of the world. The school declined to comment.

It comes after its headmaster Richard Cairns wrote an open letter in 2020 which lamented ‘persecution of members of the LGBT community across the world’.

A Department for Education spokesman told the Times that while some international affiliates of British schools are accredited by the government and follow its independent schools standards, others are not and therefore must follow rules and laws of their host countries.

Those that are accredited are liable to inspections and can be closed if serious failings are found.

Truck with 100 monkeys crashes, some of them missing

Truck with 100 monkeys crashes, some of them missing