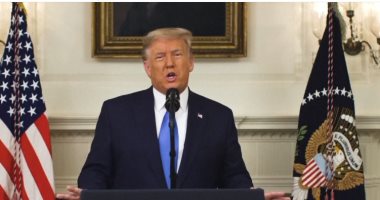 Today, Saturday, millions of Americans may lose unemployment benefits that were provided by the government, with President Donald Trump objecting to signing a $ 2.3 trillion funding package for government spending and mitigating the effects of the Coronavirus pandemic, saying it does not provide enough aid to the average citizen.

Trump surprised members of both the Republican and Democratic parties when he expressed dissatisfaction last week with the massive spending bill that provides $ 892 billion to mitigate the effects of the Corona virus, including unemployment benefits that expire on Saturday and $ 1.4 trillion for regular government allocations.

Without the president’s signature, about 14 million people will lose unemployment benefits, according to the Ministry of Labor data, in addition to the government halting part of its work, starting next Tuesday, unless Congress approves a government funding bill to fill this gap before that.

After months of wrangling, Republicans and Democrats agreed on the funding package early last week, with support from the White House. Trump, who will hand over power to President-elect Joe Biden on January 20, did not object to the provisions of the bill before it was put to a vote in Congress on Monday night.

But he has since complained that the bill allocates huge sums of money for special interests, cultural projects, and foreign aid, while the one-time benefit of millions of affected Americans of $ 600 per person is very insignificant. And he demanded to raise it to two thousand dollars.

“Why don’t the politicians want to give people two thousand dollars instead of just 600? … Save our people money!” He wrote in a tweet on Christmas Day, which he spent most of his time at his Mar-a-Lago resort in West Palm Beach, Florida.

Many economists agree with the idea that the subsidy provided by the bill is very small, but they believe that providing immediate support is still necessary and welcome.

A source familiar with the matter said Trump’s objection to the bill caught many White House officials by surprise. Since the president’s strategy toward the bill is unclear, he has not used his veto power to block it and there is still room to sign it in the coming days.

Trump is scheduled to stay on Saturday in Mar-a-Lago, where the bill was presented. As for Biden, who Trump is still refusing to win the November 3 election, he is spending the holiday in his home state of Delaware and has no public events scheduled for Saturday.

Iranian MP: Some FATF members were the killers of Fakhrizadeh and Soleimani