Ministers have insisted Boris Johnson is in ‘listening mode’ amid claims he could jettison the £12billion national insurance hike and cull Downing Street staff to cling on after the Partygate scandal.

The PM is still waiting for the Sue Gray report into lockdown breaches in No10 and Whitehall, but so-called ‘Operation Big Dog’ is in full swing to prevent angry Tory MPs mounting a coup bid.

Despite multiple Cabinet ministers being sent out to insist the NI rise will go ahead to fund the NHS and social care reforms, there are claims that Mr Johnson is ‘wobbling’ and could either delay the increase or drop it altogether to help defuse a backlash.

Conservatives are hoping that he will also bow to demands for a mass cull of Downing Street staff to ‘reset’ the machine, as well as making concessions on a series of other issues that have been rankling.

Many backbenchers have been pushing for compulsory Covid vaccination for NHS and care staff to be abandoned on civil liberties grounds – something the government has so far been resisting.

Speaking on BBC Question Time last night, defence minister James Heappey stressed the importance of raising more revenue for services. But he said: ‘You will have noticed that the top of  the government is in listening mode at the moment.’

Any shift on NI would cause immense frustration among senior ministers, who have been repeatedly sent out to endorse the policy despite often harbouring doubts. Rishi Sunak could also put up strong resistance as he has insisted the government must act to balance the books after the pandemic.

Business Secretary Kwasi Kwarteng insisted last night that there will be ‘no U-turn’, while technology minister Chris Philp delivered the same message in interviews this morning.

One senior Tory MP told MailOnline that they would welcome a shift on issues such as national insurance.

But they warned: ‘We’ve got to have a lot more stability than this.’ 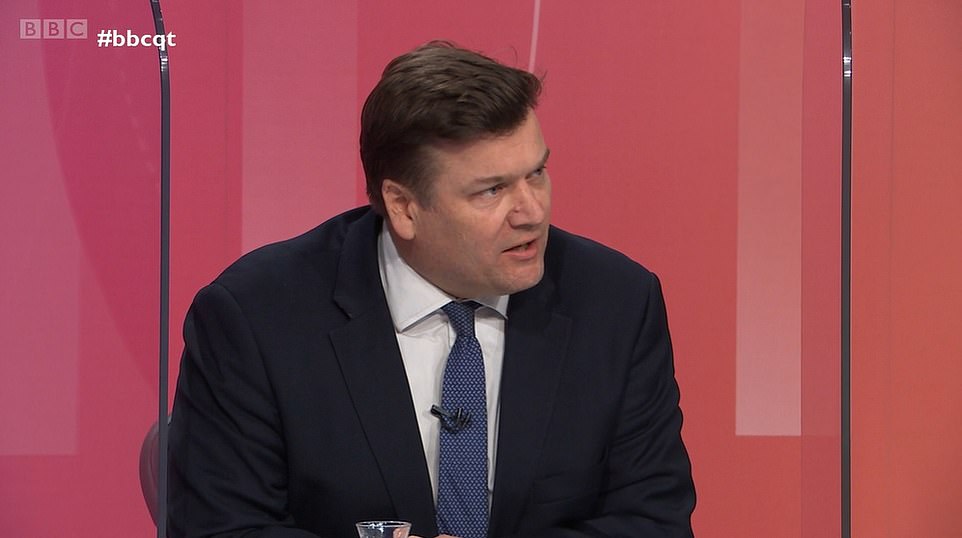 Speaking on BBC Question Time last night, defence minister James Heappey stressed the importance of raising more revenue for services. But he said: ‘You will have noticed that the top of the government is in listening mode at the moment.’ 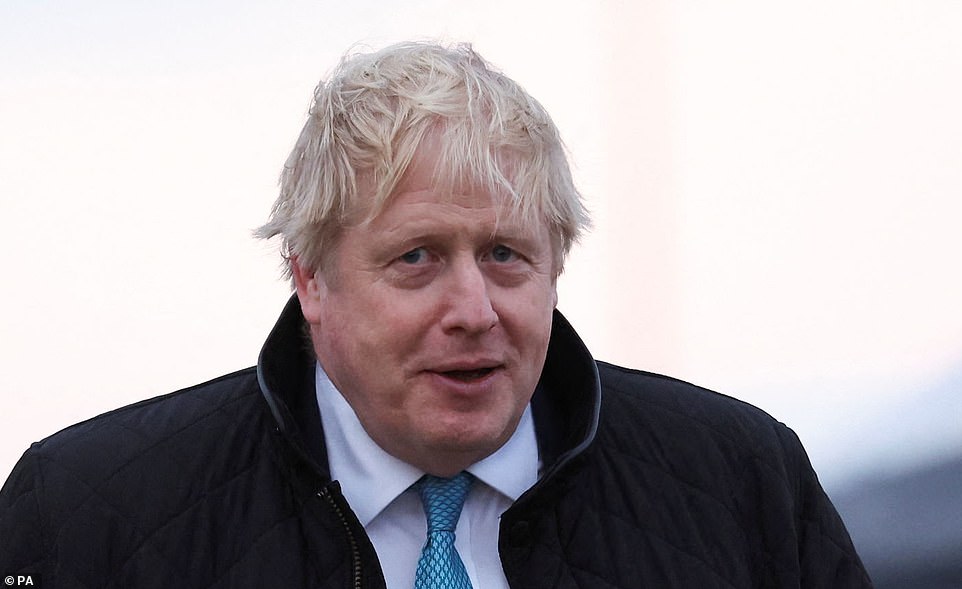 Treasury staff believe Boris Johnson may be about to scrap – or delay – the national insurance rise as he fights for the support of wavering Conservative MPs.

They are believed to have grown increasingly alarmed at the refusal of No10 to close down the question of whether the April tax rise could be paused.

The Mail revealed yesterday that several Tory MPs had urged the Prime Minister to rethink the rise during meetings with him over the Partygate scandal.

In a television interview on Tuesday the PM refused eight times to confirm that it would go ahead.

That pattern was repeated yesterday when he stressed the need for extra funding for the NHS, but refused to say the 1.25 percentage-point hike would proceed in three months.

Meanwhile, his spokesman refused to guarantee it would take effect on schedule, saying only that there were ‘no plans’ to cancel it.

It is understood there have been no formal talks on the issue between the PM and Chancellor Rishi Sunak.

While any move to delay the rise would delight Tory backbenchers, it would also detonate a huge row between No10 and No11.

The tax rise was agreed in September after the Chancellor warned Mr Johnson that public finances could not cope with a huge spending increase to fix the NHS backlog and social care without a new source of revenue.

Former Treasury minister Mel Stride, now chairman of the Commons Treasury Committee, backed calls for it to be postponed yesterday.

He suggested that the ‘stars had aligned’ for ministers to delay the rise to help ease a cost-of-living crisis facing millions of families. 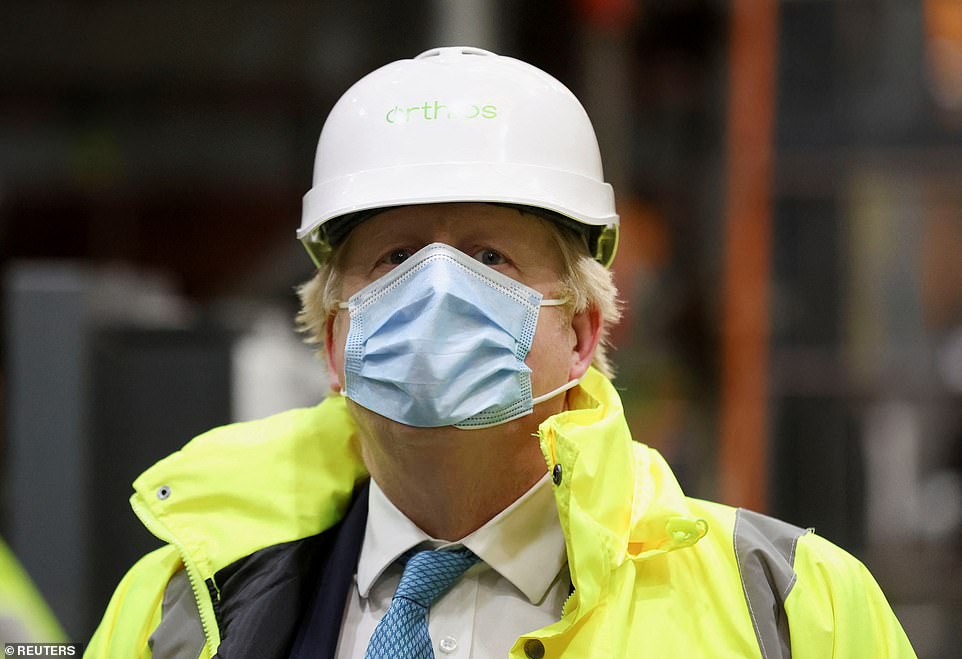 It is understood there have been no formal talks on the issue between the PM and Chancellor Rishi Sunak. But while any move to delay the rise would delight Tory backbenchers, it would also detonate a huge row between No10 and No11

Mr Stride said it was clear that Mr Sunak had the ‘extra wriggle room’ to afford a ‘politically and economically sensible’ delay.

His comments were echoed by Paul Johnson, head of the Institute For Fiscal Studies think-tank, who said the rise ‘didn’t need to happen this year’.

The campaign has gathered significant momentum since the Daily Mail highlighted the issue last week.

The Government said the Health and Social Care Levy would raise £12billion annually for social care and clear the NHS backlog. But energy prices have since rocketed, inflation is at its highest in 30 years and interest rates face a big rise.

Campaigners who fear it will hit stretched household finances are joining the Daily Mail’s campaign to Spike The Tax Hike.

A business backlash grew last night as industry leaders warned the rise would be ‘the final nail in the coffin’ for many firms. Trade bodies for pubs, builders, recruiters, convenience stores and farmers backed the campaign a day after the Institute of Directors and British Chambers of Commerce.

Tory MPs are also pressing the PM to reconsider the rise as he tries to win their backing in the face of the Partygate row paralysing the Government.

One minister admitted the PM might ditch the rise if it could save his job, adding: ‘Pressure is certainly growing. I suppose if he felt it was the ‘big thing’ that would save him, the PM probably would.’

Mr Stride said the Government had ‘an opportunity to not go ahead’, describing it as an ‘inflationary measure in itself’ that would have ‘knock-on consequences for the servicing costs of the national debt, so it would have a negative fiscal impact’.

He added: ‘Given that £13billion more is available than forecast in October, and that money could be used to exactly cover the cost of not going ahead with the NI rise, the stars have aligned in a way that makes that possible.’

Paul Johnson said the Government should consider another tax to raise the revenue, adding: ‘National insurance is only paid by workers and employers, so those who get income from invested wealth, occupational pensions and those who are relatively wealthy won’t be paying at all. We’d have been much better off, from an economic point of view, if something like income tax had been used.’

Tory Sir John Redwood said: ‘The Treasury has found more money down the sofa than the national insurance raise would yield.’

A Government spokesman said: ‘We’ve supported businesses throughout the pandemic through our nearly £400billion package of support. It’s right that employers, who benefit from a healthy workforce, contribute to the levy.’