Moderna will submit their coronavirus vaccine for emergency approval

Moderna will today submit their Covid-19 vaccine for emergency approval after final results from trials show it is 94.1 per cent effective at preventing infections and the UK is set to approve Pfizer‘s jab ‘within days’.

Final results from the companies stage 3 trials mark a landmark success for the vaccine, with only 11 out of the 196 volunteers who tested positive for the virus having received the jab. There are around 30,000 people in the study in total, each receiving two doses of the jab or a placebo.

The more than two-month study also found that no one who caught the virus after receiving the vaccine suffered a serious illness, no safety concerns with the jab, and that the vaccine worked in all age groups.

Experts today heralded the results as ‘very good news’ and remarked they were ‘virtually identical’ to the early stage figure of 94.5 per cent – which was announced after 95 infections were confirmed, including five in people who had received the vaccine.

The Food and Drug Administration (FDA) in the US and European Medicines Agency (EMA) will today be sent the results along with a request for emergency approval, with a meeting with US regulators expected in less than three weeks on December 17.

Regulators in the UK, the Medicines and Healthcare products Regulatory Agency (MHRA), were also handed the results. They have been running a ‘rolling review’ and plan to decide whether to approve the jab in the ‘shortest time possible’, but it can take days to make a decision following the submission.

As many as five million doses of the vaccine – which uses protein-building mRNA from the virus to trigger an immune response – were hastily ordered by the UK when the early trial results were announced this month, and another two million were added this weekend. They are expected to begin arriving by next year but the full order may not be received until Easter next year.

The announcement follows hot on the heels of Pfizer and BioNtech, who said ten days ago they had also submitted their vaccine – which was up to 95 per cent effective in clinical trials and is also based on mRNA – for emergency approval by US regulators.

The UK is poised to become the first western country to approve this vaccine within days, reports the Financial Times, with deliveries of the 40million doses ordered expected to begin within hours of it receiving the green light from regulators. The first vaccinations could begin on December 7.

Oxford University has said its jab is up to 90 per cent effective against coronavirus when given as a half-dose and a full-dose, but this is based on results from only 3,000 participants following a mistake in the trials. Its vaccine is up to 60 per cent effective when two full doses are given, their data said.

The UK has ordered 100million doses of the vaccine, which is based on Covid-19 spike proteins – used by the virus to infect cells – attached to weakened common cold viruses.

It comes after it was suggested the NHS would recruit celebrities to encourage people to get vaccinated against the virus, following fears people may reject the jabs. 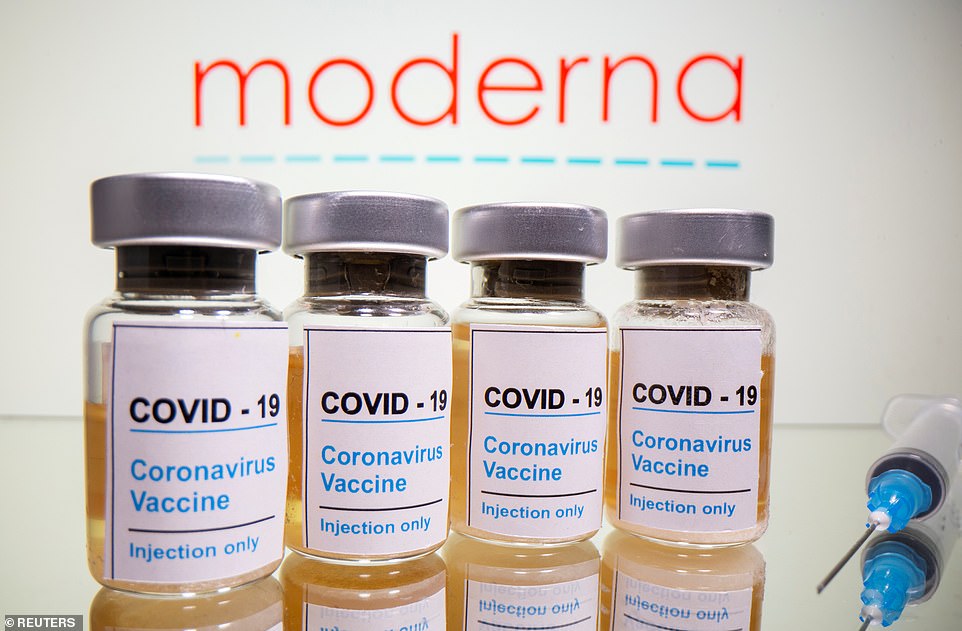 Moderna has become the second high-profile company to confirm interim results of a clinical trial of its coronavirus vaccine, claiming that the jab is nearly 95 per cent effective 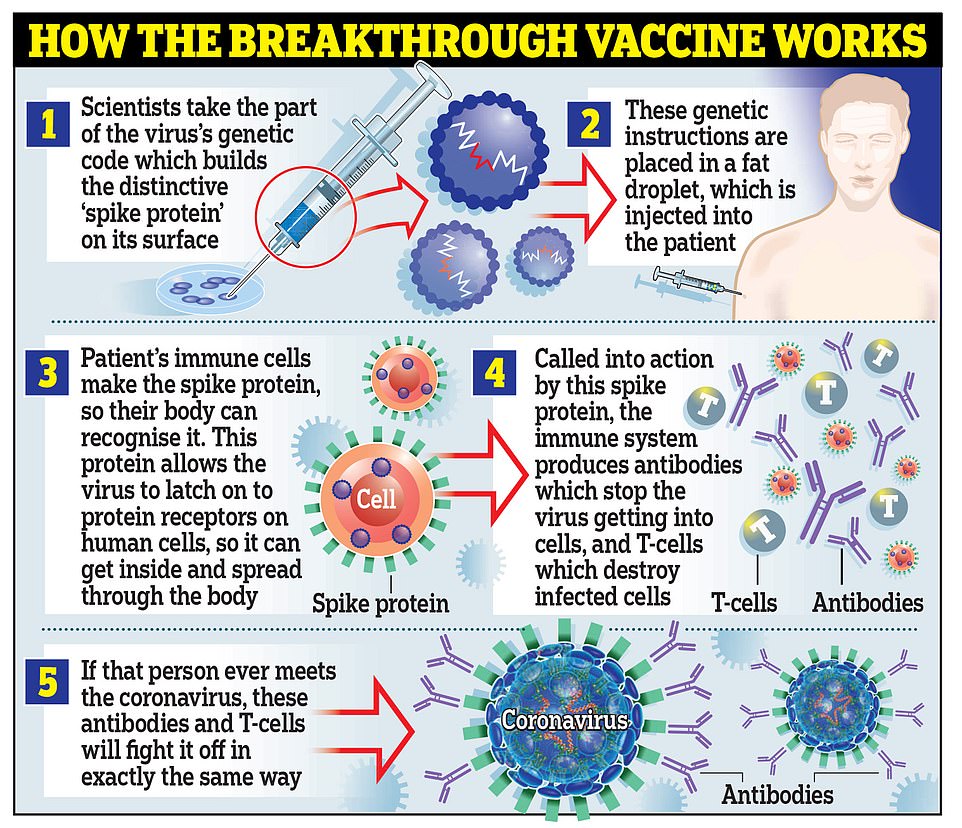 Moderna’s vaccine works in the same way as the one developed by Pfizer and BioNTech, by using genetic material called RNA from the coronavirus to trick the body into making the ‘spike’ proteins that the virus uses to latch onto cells inside the body

HOW DO THE MODERNA AND PFIZER/BIONTECH VACCINES COMPARE?

Vaccine is not expected to be available to Europe until spring 2021, the UK Government says. Moderna will produce 20m doses this year, expected to stay in the US.

Moderna also said their phase 3 trials showed that the vaccine was effective across all age groups, with 33 of the 196 infections recorded in people aged over 65. It is not clear whether any of these individuals had received the vaccine.

They also said no concerns were raised over its effect on non-white ethnic groups, after 42 people from diverse backgrounds were included in the study.

‘We believe that our vaccine will provide a new and powerful tool that may change the course of this pandemic and help prevent severe disease, hospitalisations and death.’

The landmark figures represent just a 0.4 per cent drop in the reported efficacy of the vaccine on November 16, which was based on the first 95 infections in the study where five were in people who had received the jab.

Dr Stephen Evans, an epidemiologist at the University of Southampton, said the two figures were ‘essentially identical’ and showed the jab was ‘very good’ at preventing severe as well as mild Covid-19 infections.

‘These results are essentially identical to those announced on November 16, with a few more details,’ he said. ‘In my comment on November 16 I noted that it was important not to pay too much attention to the exact percentage value of the efficacy.

‘While the best estimate is 94.1 per cent against all Covid-19 disease, the statistical uncertainty in this is such that the data are compatible with a true efficacy of about 87 per cent. This is of course, still a very good efficacy.

‘Similarly, the 100 per cent efficacy against more severe disease is compatible with an efficacy of 90 per cent again, this is very good and is some evidence that severe as well as mild disease is prevented.’

He added: ‘There seems to be no evidence that efficacy is worse at older ages, though with only a total of 33 aged 65 and over, the uncertainty in these results on their own is considerable.’

Responding to today’s release Dr Alexander Edwards, an immunologist at the University of Reading, said: ‘This is great news indeed- the more trial data that we have, the greater confidence we have that vaccines can be used to blunt the human cost of Covid-19. As the numbers of cases reported grows, confidence grows that this amazing protection will be maintained in a product that can be rolled out to protect the public.

‘The most significant part of this news is that we should remember RNA vaccines are really new, and potentially have really significant advantages over some other older types of vaccines. Moderna have also recently announced improvements to the product stability, allowing normal fridge distribution for up to 30 days, and frozen storage in normal (-20) freezers, which will help with logistics.’

Dr Michael Head, senior researcher in global health at the University of Southampton, said: ‘These revised findings are very much in line with those previously announced by Moderna.

‘This is essentially good news, in that there continues to be a very high level of observed effectiveness, with this effectiveness was consistent across older populations and ethnic minorities.

‘There were also no serious adverse events caused by the vaccine. We must of course reserve a little caution as we await the final published results, but for now we can retain the existing optimism that this new generation of vaccines may be deployed in the near future.’

‘The results have been tested across a diverse population and are reported as being consistent in different sub-groups although these numbers are not given and we should wait for further information in the scientific article that is being prepared.

‘Although not yet reported, the trial includes a secondary endpoint of asymptomatic infection – efficacy against this would be very welcome as it would give the first indication of the broader indirect impact that widespread vaccination could have in reducing onward spread.’

Moderna will submit their coronavirus vaccine for emergency approval