More than 50 million Covid-19 infections have been recorded worldwide, with 1.25million deaths


The worldwide total of coronavirus cases has passed 50million, with Europe once again the epicentre of the pandemic and the United States now seeing more than 100,000 new infections per day.

Europe accounted for more than half of the 3.8million new cases in the last week, with massive new spikes in countries including France, which saw 373,000 cases in seven days.

The US is now approaching 10million cases after its worst spike in infections so far and its death toll is above 236,000 as president-elect Joe Biden prepares to take office in January.

Meanwhile, the global death toll passed 1.25million on Sunday with more than 50,000 fatalities in the last week alone. 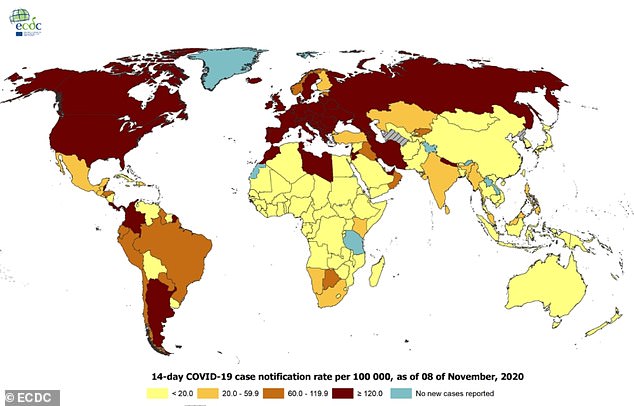 Europe and North America are the current epicentres of the pandemic, which has now caused more than 50million infections and 1.25million deaths linked to Covid-19

After the pandemic erupted in China late last year, the world reached a million cases in early April, ten million in late June and 25million at the end of August.

The global figure has since doubled to 50million in the space of only ten weeks after Europe suffered a massive resurgence which has forced it back into lockdown.

Daily deaths have climbed back into the hundreds in Britain, Spain, France and Italy, which have all piled up record numbers of infections in recent weeks.

Britain and France are both back in national lockdowns while Italy is imposing regional measures and Germany has instituted a so-called ‘lockdown light’.

France’s economic forecast worsened today as the central bank forecast a 9-10 per cent drop in GDP, a bigger slump than previously predicted.

The bank estimated that the new lockdown will cost the nation’s economy 12 percent of GDP compared to a normal week in November.

Meanwhile, some countries in Eastern Europe which escaped relatively lightly in the first wave are now seeing higher daily death tolls than ever before. 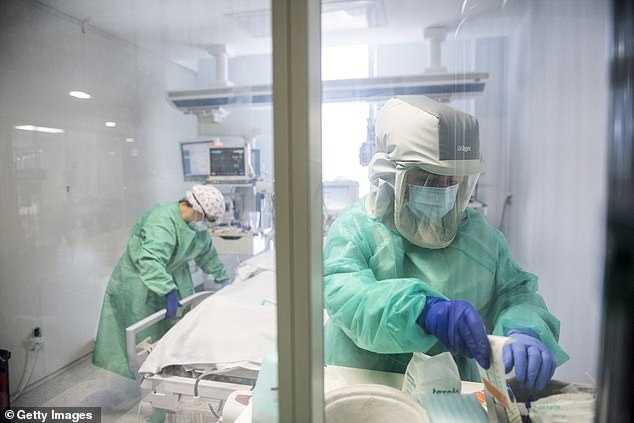 The Czech Republic has seen 1,430 new deaths in the last seven days alone, more than it suffered during the entire first wave in the spring.

Russia is now adding more than 300 deaths per day after bringing the average figure below 100 as recently as September, while cases are nearing two million.

Europe’s cumulative total of 11.6million cases is only just behind North America’s 11.7million, while Asia has the most with just under 14.3million.

Worldwide, the number of new infections is now frequently above 500,000 per day, after first reaching the 400,000-a-day mark in October.

The United States, which experienced a slight respite over the summer, has seen the number of daily infections top 100,000 cases for the last few days.

The world’s richest country country is approaching 10million confirmed cases for more than 237,000 deaths, or a fifth of all the infections detected in the world. 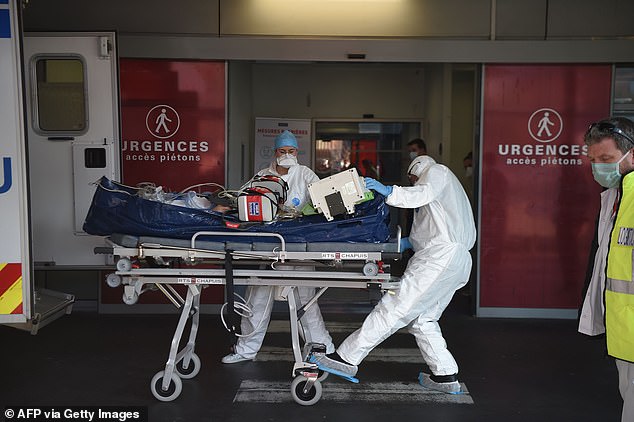 US president-elect Joe Biden has promised ‘swift and aggressive’ action to tackle the crisis when he takes over from Donald Trump in January.

Biden will announce a 12-member task force on Monday to deal with the pandemic, vowing that his administration will always ‘listen to science’.

As the pandemic continues to rage, the WHO warned last week that the current situation in Europe and the US was a ‘critical moment for action’.

‘We all have a role to play in suppressing transmission and we have seen across the world that it’s possible,’ said WHO director-general Tedros Adhanom Ghebreyesus.

Meanwhile, the race to deliver a vaccine is still going on, with some candidates expected to release early data before the end of 2020.

Some regulators have said that vaccines must demonstrate at least 50 per cent efficacy – meaning those who got a placebo jab should get twice as many infections.

The European Medicines Agency has said it may accept a lower efficacy level.