The new street art appeared at Vinegar Yard in London Bridge and shows the faces of manager Southgate, as well as captain Kane and star forward Sterling.

Southgate and Kane were born in Watford and Walthamstow, while Sterling moved to London from Jamaica when he was five.

It includes the words ‘You did us proud’ and comes after crowds gathered at the mural of Rashford which was daubed with ‘racist’ graffiti in the wake of his Euro 2020 penalty heartache. 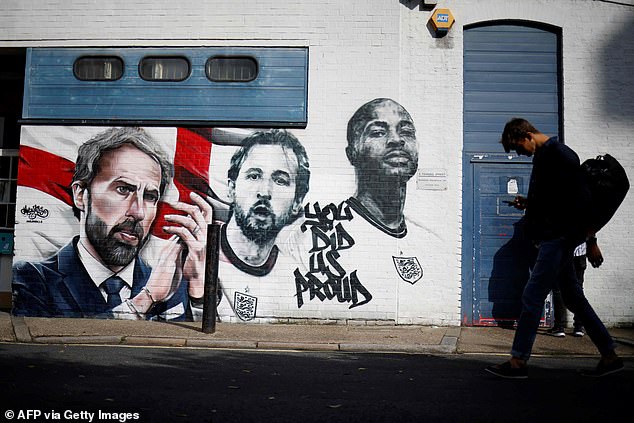 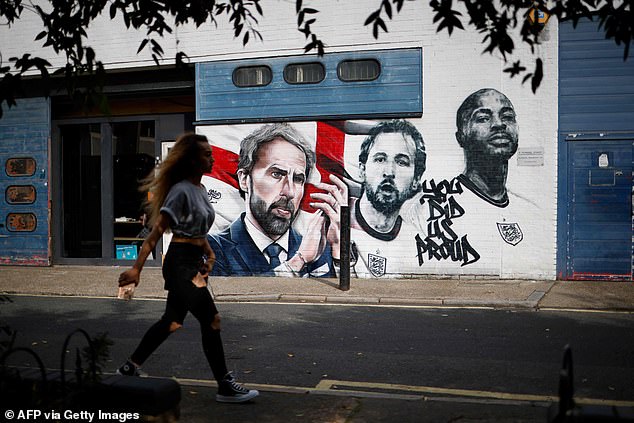 Southgate and Kane were born in Watford and Walthamstow, while Sterling moved to London from Jamaica when he was five

The tribute on the wall of the Coffee House Cafe in his home town of Withington, Manchester, had been defaced, in what is being investigated by police as a possible ‘hate crime‘, with derogatory comments about Rashford and included the words ‘sh**e’ and ‘b*****d’.

The graffiti was covered by fans before the mural’s original creator, French-born artist Akse, repainted it this morning.

Commenting on the London mural, Mayor of London Sadiq Khan said the new mural was created ‘to pay tribute to the team’s performance’ and as a thanks for ‘uniting our nation in our time of need’.

He added: ‘What an amazing month the England team have given us during the Euro 2020 tournament.

‘On behalf of all Londoners, I want to congratulate the magnificent England football team and their wonderful manager Gareth Southgate on making it to the final of the competition.

‘The murals are a wonderful celebration of a team that have inspired and united our nation in our time of need.

‘I encourage as many people as possible to take a look and get out and about in our wonderful capital this summer.’

It was designed by urban street artists MurWalls, whose founder Marc Silver said: ‘Football may not quite have come home but pride in our national team certainly did – and that’s in no small part down to the leadership of Gareth Southgate.

‘On and off the field, he and his players are true role models for young Londoners. We look forward to honouring them going one better next year!’ 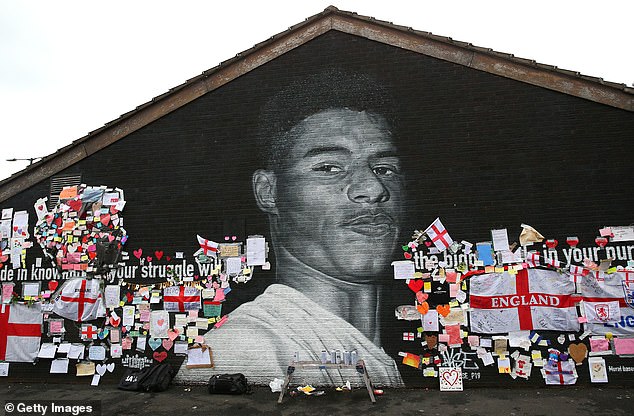 England star Rashford, 23, yesterday penned an emotional open letter to fans apologising for his penalty miss against Italy at Wembley on Sunday.

The striker, who was left visibly distraught after his penalty hit the post, had also paid tribute to his supportive teammates and vowed to ‘come back stronger’ after the heartbreaking final.

Teammates Jadon Sancho and Bukayo Saka also missed penalties, with the stars subjected to vile racist abuse on social media in the aftermath.

Speaking in an open letter posted on his Twitter account, Rashford said: ‘The messages I have received have been positively overwhelming and seeing the response in Withington had me on the verge of tears.

‘The communities that always wrapped their arms around me continue to hold me up.

‘If I have nothing else, I have that.’

Earlier in the open letter he apologised for his penalty miss against Italy, saying ‘I felt as though I’d let everyone down’.

‘It’s been playing over in my head over and over since and there’s probably not a word to quite describe how it feels,’ he said.

‘Final. 55-years. 1 penalty. History. All I can say is sorry. I wish it had gone differently.’

Residents wasted little time in rushing to cover up the abuse written on Rashford’s mural with hundreds of positive notes and messages praising the England star – including terms such as ‘hero’, ‘inspiration’ and ‘role model’.

One touching message read: ‘I can take or leave football but I cannot take or leave people like you. Thank you for your passion, compassion and desire to change lives.’

Another said: ‘Dear Marcus, please know that you are so admired and people find you an inspiration.’

Common coronavirus circumstances and deaths are persevering with to extend throughout the U.S, reaching ranges not seen in a...