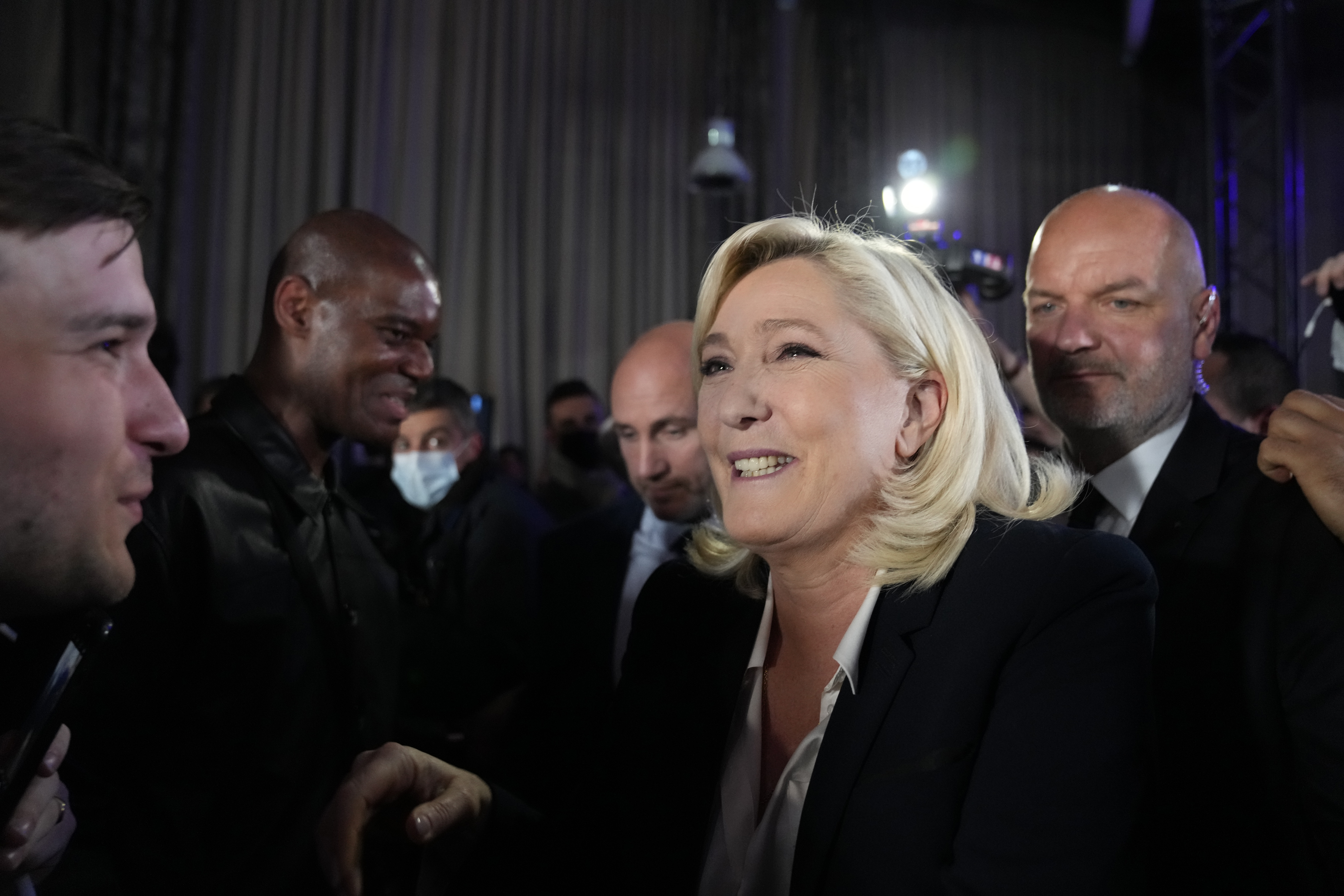 PARIS — NATO and the European Union face a nervous two weeks after projections showed French far-right leader Marine Le Pen on Sunday qualified for the second round of the French presidential election to challenge Emmanuel Macron on April 24.

Projections by polling firm Ipsos suggest the French president won 28.4 percent of the vote at the end of the first round of voting. His rival Le Pen, a longtime admirer of Russian President Vladimir Putin, garnered 23.4 percent of the vote, according to the same projections. It is Le Pen’s third appearance —and her highest ever showing — in the first round of a presidential election.

While polling suggests Macron should retain the presidency in two weeks, he is on course for a far closer second-round clash than in the 2017 election, when he also faced Le Pen.

Those narrowing poll predictions mean all eyes, both in Europe and in Washington, will be on the twists and turns of the campaign in the coming days, as allies seek to weigh up whether Paris will remain a reliable partner in the war against Putin’s forces in Ukraine. A debate on April 20 is likely to be a decisive encounter where Le Pen will try to project a more polished image than her shaky performance taking on Macron five years ago.

When it comes to NATO, Le Pen has triggered alarm by stating her desire to pull the EU’s only nuclear power out of the alliance’s integrated command structure “so as to be no longer caught up in conflicts that are not ours.” That stance provokes particular concern because — despite her condemnation of the invasion of Ukraine — Le Pen has long enjoyed cozy relations with the Kremlin and has received party loans from a Russian bank.

If she does succeed in overhauling Macron in the second round, she would also inflict potentially fatal harm on the functioning of the European Union. While her party, the National Rally, has dropped its proposal to leave the EU, the free-movement Schengen zone and the euro, Le Pen has remained broadly a Euroskeptic, with plans to reduce France’s EU contributions and promote a coalition with nations such as Hungary and Poland, run by likeminded politicians.

There are also proposals in Le Pen’s campaign platform that contradict the EU’s free movement principles, sparking accusations that her plans for France are Frexit in all but name. Le Pen, for instance, wants to boost the number of border staff and reintroduce checks on goods entering France in order to fight fraud. She also wants to renegotiate the agreement on the Schengen area, which she has slammed as “inapplicable,” and replace it with simplified checks for EU citizens.

“The fortnight to come is decisive for our country and for Europe,” Macron told a cheering, flag-waving crowd of supporters.

Buoyed by the results, Le Pen’s supporters on Sunday night chanted “We will win” and sang the Marseillaise. In an address to her supporters, she played strongly on identity issues, sovereignty and cost-of-living concerns, and promised to be “a president for all French people.”

The results cement the idea that France has moved beyond the traditional left-right divide that has dominated post-war politics, and toward a battle pitching anti-immigration nationalists, represented by Le Pen, against pro-European progressives who are open to globalization.

Much will now depend on which candidate can pick up the support from Jean-Luc Mélenchon on the far left, who came third in the first round with a projected vote of slightly more than 22 percent. His voters appear to be split over who to back in the second round of voting. According to recent polling from Ipsos, half of Mélenchon’s voters don’t have a preference between Le Pen and Macron, while the other half is split between Macron and Le Pen, with a preference for Macron.

Mélenchon himself called on voters not to cast a ballot in favor of Le Pen in the second round but stopped short of endorsing Macron.“[We have] to choose between two evils that are terrible for us and that aren’t of the same nature,” said Mélenchon in his concession speech.“Every one of you will face his conscience,” he said, later repeating several times: “We must not give a single vote to Marine Le Pen.”

Less grudgingly, several other rivals immediately threw their weight behind Macron for the second round, including Valérie Pécresse from the conservative Les Républicains, Paris Mayor Anne Hidalgo of the Socialists and Yannick Jadot from the Greens.

This election is the closest the Le Pen family has come to getting a chance to run France.

Back in 2002, the incumbent Jacques Chirac easily knocked out Le Pen’s father, Jean-Marie Le Pen, with 82 percent of the vote in a face-off that was pitched as a fight to safeguard French values. In 2017, Le Pen herself lost to Macron with close to 34 percent of the vote, a much greater share than her father.

This time around, POLITICO’s Poll of Polls suggests she could get as much as 47 percent of the vote on April 24.

The tension around the French presidential race increased a couple of notches in the last days of campaigning as it became clear Le Pen was giving Macron a run for his money.

Le Pen has campaigned for months, touring villages and small towns in a low-cost campaign that has tried to reach the ordinary French, and her early focus on cost-of-living issues has proven timely as inflation and increasing fuel costs hit French budgets. Styling herself as a champion of the poor and the downtrodden against the elites, Le Pen promises to “give their money back to the French” with a range of generous proposals including cutting income tax for young adults and slashing VAT on fuel, a measure that is bound to appeal to those who backed the Yellow Jackets protests in 2018 and 2019 against fuel taxes. Her challenge will be to convince voters, particularly conservative voters, that her economic proposals are sustainable.

Macron, meanwhile, has been perceived as taking a high-handed approach to the election, declaring his candidacy only last month, and refusing to debate with rival candidates. He has also been accused of trying to draw political capital from his diplomatic efforts to stop the war in Ukraine, and has been dogged by revelations his government spent millions on consulting firm fees.

Seeking to wrest away some Le Pen voters who backed her for her economic policy, Macron promised on Sunday night to deliver on the cost of living issues that she has made very much her own. “The only plan for purchasing power is our one!” he proclaimed.

Macron’s supporters are hoping that despite these recent upsets, his track record on managing the COVID-19 pandemic and driving France’s economic recovery will be recognized by French voters.

Looking ahead to the second round of voting, one of the key questions is whether Le Pen has managed to widen her appeal beyond the National Rally powerbase.

In the past years, Le Pen has sought to make her party more mainstream and tone down her at times incendiary rhetoric on immigration, in an effort to attract more traditional conservative voters.

She has also sought to make herself more appealing to left-wing voters by pushing to bring forward the age of retirement and cut VAT on basic foodstuffs.

Reactions in the camp of her far-right rival Eric Zemmour will also be watched closely. Once seen as a serious threat to her on the right, Zemmour only mustered some 7 percent of the vote, according to the Ipsos projection.

Zemmour had no qualms about playing the immigration card when telling his supporters to get behind Le Pen.

“Le Pen faces [Macron], a man who has let 2 million immigrants enter France, and who has not said a word about security, immigration during his campaign and who will do worse if he is elected,” Zemmour told his supporters in Paris. “That’s why I call on my voters to cast a ballot for Marine Le Pen.”

Volunteers across the world commit to fighting Russian misinformation