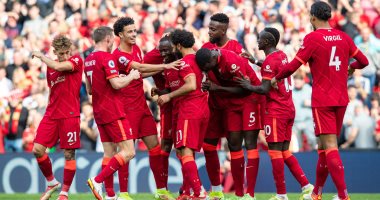 Norwich City hosts Liverpool at 9:15 p.m. today, Tuesday, at Carrow Road Stadium, in the third round of the English League Cup, in a meeting in which the owners of the land raise the slogan of revenge for the defeat they suffered at the beginning of the season in the league against the Reds.

Norwich City, returning to the English Premier League this season, will try to avenge their loss at home to Liverpool, by three goals, in the first round of the Premier League.

The Egyptian international Mohamed Salah, the Liverpool player, wished himself to renew the great state of brilliance he appeared against the same team at the beginning of the season, where he scored a goal and assisted two and was awarded the best player of the match for his outstanding performance.

Liverpool revealed that Spanish international midfielder Thiago Alcantara will miss his next two matches after suffering a calf injury earlier this week.

With this, Thiago became the second Liverpool midfielder to be injured recently, after Harvey Elliott fractured his ankle in the match against Leeds United last week and underwent surgery after that..

Liverpool’s right-back Trent Alexander-Arnold will also be absent due to illness.

Liverpool are also missing the services of Brazilian Roberto Firmino when they face Norwich City, but the club stated that the striker was “preparing to resume group training this week.”“.

On the other hand, the Norwich team seeks to achieve a positive result that will enable it to delight its fans, who resented the poor performance it achieved during the past matches, as the team occupies the last place in the standings table with no points in its balance.

Norwich City participated in 5 matches of the English Premier League, but lost in 5 matches.