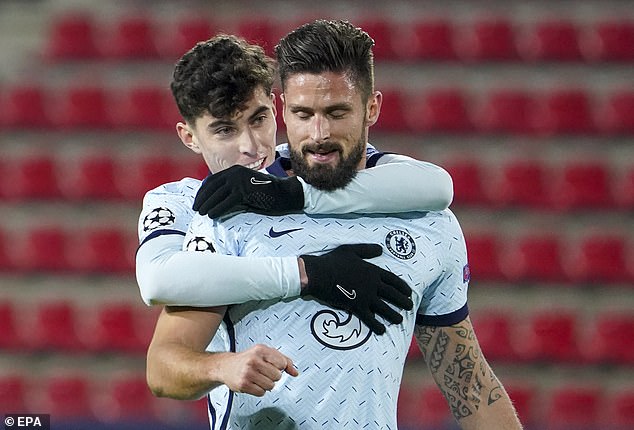 Olivier Giroud proved his worth on Tuesday after he came off the bench to score a towering header and win Chelsea‘s Champions League clash against Rennes.

After starting on the bench, Frank Lampard sent the Frenchman on in place of Tammy Abraham with the aim of getting a second goal for Chelsea.

Following Callum Hudson-Odoi’s early opener, Chelsea were pegged back by late equaliser from Sehrou Guirassy, which would have delayed their plans of reaching the knockout stages.

Olivier Giroud only had his eyes on the ball there, and powered his header home! ?

Chelsea are into the Champions League knockouts! pic.twitter.com/v8ksViwe6m

However, with just a couple of minutes of injury time left on the clock, Giroud made the crucial impact after he leaped high in the air to head in a last-gasp winner and send Chelsea into the knockout stages of the Champions League.

The goal comes after Giroud has once again found himself on the fringes of Lampard’s plans, leaving him to think about a move away from Stamford Bridge in January to get regular minutes for next summer’s Euros.

While Lampard opted to start Abraham on Tuesday, the Chelsea boss admitted Giroud’s goal has given him food for thought going forward.

Chelsea great Joe Cole was full of praise for Giroud after the match and believes the World Cup winner doesn’t get the credit he deserves.

‘I think he’s (Giroud) one of the Premier League’s most underrated players, he consistently performs whether it be for Arsenal or Chelsea,’ Cole told BT Sport.

‘It’s not just moments like today such as getting the winning goal, it’s his general demeanour around the place, he’s a good player in the dressing room.

‘There’s a reason why Didier Deschamps relies on him for France. Frank will not want Giroud walking out of the door in January.

‘It was a great header from Giroud, he got up. That was amazing.’

Sportsmail’s Peter Crouch agreed with Cole and was thoroughly impressed with the airtime Giroud got for the goal.

‘We know how good Giroud is in the air,’ Crouch added.

‘The determination, the presence and the power he gets into that header. Look at the leap. It was a fantastic finish, he makes it look easy and it was far from easy.’

Lampard admits that he has a selection headache with juggling his frontmen but was full of praise for his game-winner.

‘He does things like that but I thought his hold-up play and physicality when he came on was very good,’ Lampard told BT Sport after the game. ‘I have a problem, I have Tammy (Abraham) who’s playing well, Oli who contributes in that way – he’s incredible.

‘I have two players in a similar position.

‘Oli will get his minutes because we have a busy schedule and we play every few days. I think when you see the reaction when you see something like that shows how much it means to the team.’